We’re thick into the endurance racing season, and coming up next week is the final jewel in the 24 Hour racing crown: the 24 Hours Of Spa, the second oldest day-long race in the world after Le Mans. Our friends at the WRT Audi team – who will have a monster four-car squad at the great race – have just released this video from testing, taking you round a rainy lap of Spa from the perspective of star driver Mattias Ekström.

It’s a wet and wild ride: you can tell how tricky the conditions are by the amount Mattias has to lift through Eau Rouge and how gentle he has to be on the throttle in general. And Blanchimont in these conditions doesn’t bear thinking about. I think I’d rather take the long route through one of the local villages… Now think about inserting another 60-plus cars to get an idea of how tough this race always is. This clip uses a variety of great camera angles, including a helmet cam and another low down on the splitter, though my favourite is the one mounted on the steering wheel shown at 2m14s in – which goes fully inverted at La Source later in the lap! Smooth movement in the wet there is not.

Personally I’m hoping that Belgium will have used up its quota of rainfall by the race weekend… And I’m sure the drivers do too! 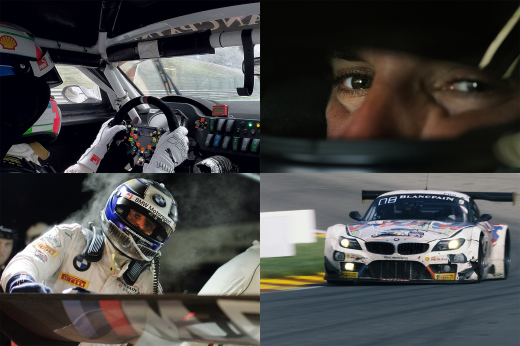