SHARE The Way Of The Samuri: Z Fever At Donington

This year’s Donington Historic Festival in the UK had the usual strong line-up of car clubs taking up the infield of the track, but one gathering I was really looking forward to checking out was the area dedicated to the Classic Z Register and the Z Club Of Great Britain.

Organiser Jonathan Kinghorn had been hoovering up Z owners from around the UK ahead of the May meet to assemble the biggest group of 240Z and 260Zs seen in the UK for some time, with a focus on a particularly special and British take on the S30 chassis.

Zs attract a particularly strong following internationally, which is no surprise given their styling and the level of technology they demonstrated in such an affordable sportscar.

You might not get brute power out of the box, but with a lightweight S30 you do get fine handling, that gorgeous long nose and curvaceous body. It’s no wonder that the Z series has become the world’s best selling sportscar – and that many of our Speedhunters team either own one (like Larry and Taryn) or enviously want one (like me!).

We’ve been seeing a lot of S30 builds and restorations from around the globe here on Speedhunters, but from their launch into the UK market the 240Z was enthusiastically taken up by the Brit tuners in period. Perhaps the most well known British modifier of Zs was Spike Anderson, who created the run of Samuri Zs.

Samuris would be the special guests at Donington’s Z Club gathering: 11 of the original cars were on show over the three days of the festival, alongside another 16 Z sisters. The star of the show was Big Sam in the metal – the car that started it all.

In 1973, the Silverstone-based Samuri team became the first European company to tune the Datsun for both racing and the road. Spike Anderson had experimented with a Datsun Sunny Coupé before turning to the new coupé from the firm.

The original Big Sam was based on a car originally driven by Rob Grant, built up from a Datsun works rally car originally entered in the 1970 RAC Rally.

The car at Donington, the better-known second version of Big Sam, was driven on the 1972 Burmah Rally in left-hand-drive guise, where the front end was totalled. It was then merged with the first Big Sam (which had also been crashed and needed a new shell!) and converted to right-hand-drive to create this car. Big Sam is now in the care of specialist restoration firm JD Classics (who also have three other Samuri), with the only drawback to its current condition being that the 2.4-litre L28 engine was out for a rebuild.

Win Percy drove the car in the national ModSports series in the ’70s, which included all manner of tuned-up madness: Skodas, Vauxhalls, Escorts, all with huge bodykits and far too much power. Win was originally down to attend the Donington meet in his own specially commissioned Samuri with hand-controls (he was paralysed from the waist down after an accident in 2003), but ill-health sadly prevented his attendance. Win was definitely missed: he’s an absolute legend, having excelled in tin-top racing between the 1970s and ’90s whilst competing in the BTCC, over in Europe and especially at the Bathurst 1000km.

Seventy-five Samuris have been built in total, including 62 Super Samuri road cars, with modified cylinder heads, triple carbs, a new six-branch exhaust manifold, alloy wheels, lowered and beefed-up suspension and most with the two-tone orange and brown Samuri livery.

Though not all of them!

This is Jonathan Kinghorn’s own 260Z Super Samuri from 1974: as with all the Zs at Donington, it was looking glorious.

The cockpit was in full period spec, with the wood trim of the three-spoked wheel really making it stand out from the matt interior and giving it a proper ’70s touch.

Six road-legal racecars were also originally constructed, and then some further race-prepped cars surprisingly recently. From the outside there’s not a huge difference between the street and racecar…

…but once you open the bonnet it’s a different story. FFA 196G is actually a Samuri built by Dave Jarman (engines) and Martin Ryland (bodywork) with the approval of Spike Anderson, one of a three-car continuation series built decades after the originals and based on a 1971 car with a full cage and hotted-up straight-six. It’s the fastest Samuri build and has a full FIA homologation papers for racing. There are even bigger cylinder heads and manifold, triple Webers, gas shocks and adjustable springs, a limited slip diff and double-core radiator…

… and from this angle you get a better view of those small diameter wide wheels and the car’s squat stance.

Samuri were by no means the only British company that produced tuned-up Zs in period: Janspeed and Fourways Engineering were contemporaries in the racing scene and also built their own modified Zs.

Fourways was represented on track at Donington as well as at the Z Club gathering, with its Big Sam competitor: a ModSports 240Z from 1971. The firm also created some even more extreme Zs in the 1980s, which I must investigate!

Along with the Samuris, there was also this G-nose Fairlady Z: one of only three known to exist in the UK.

The covered-in headlights, longer nose and factory-fitted fender extensions (plus wing-mounted mirrors and kick-up spoiler at the back) give the ZG a slightly different profile, but they still look fantastic. I’m not sure which one I prefer!

Original S30s sitting side by side with Samuris provided a good opportunity to compare bays between regular, slightly tuned straight-sixes with dual carbs like this, and the full-on race-prepped engines…

… and to enjoy Zs in alternate colours and sporting different combinations of body mods and rims.

The shimmering blue of this ’71 240Z provided a perfect backdrop for the Datsun badge.

There was also a fine range of different wheels on show. I didn’t know these were original factory options for instance…

… as I’m more used to seeing the rounded-spoke variants.

Variation also came with badges on the c-pillars, with earlier cars sporting the model number…

Frustratingly I was only able to attend the festival for one day, so I didn’t get to enjoy the full line-up of classic Zs that would turn up over the weekend – not that I had a bad collection to examine! 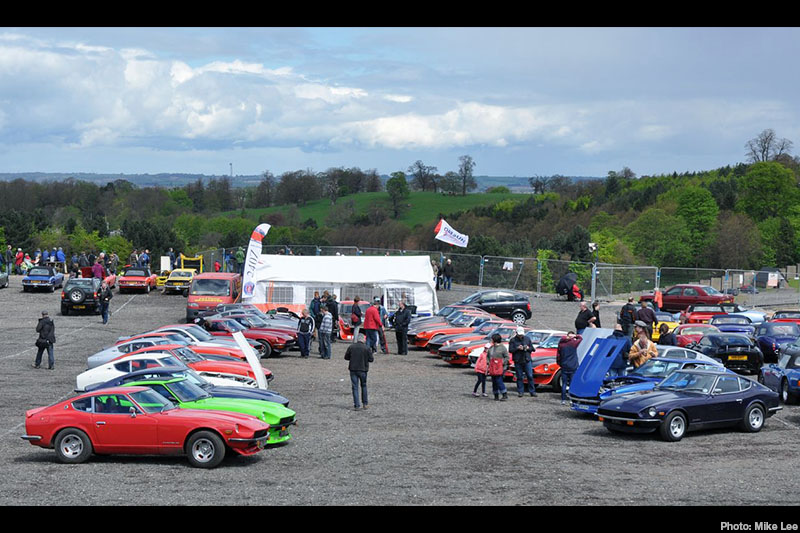 But even more owners rolled in on the Saturday and Sunday, presenting this fantastic sight. I’m sure plenty of spectators were converted S30 fans over the weekend.

The Z Club’s tent contained plenty of merchandise to prise open the wallets of passing fans: if only they’d had my size I would now be wearing a Datsun shirt with pride! I’ll be keeping a look-out for a resupply…

… which I feel could well be the first step to becoming an owner of an S30. I’m becoming a stuck record, but these Datsuns have a magnetic charm that resonates with me more than any other Japanese car. And jealousy can sometimes be a positive thing. The club hope to attract even more Zs for 2014 – perhaps I can try and add one extra car to their list?…

Brothers From Another Mother: A Fairlady Z & HSV GTS 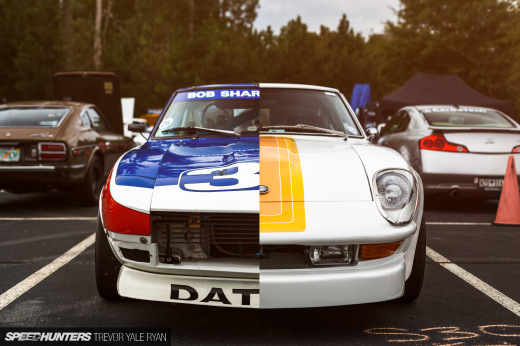 One Of A Kind: Street Or Race

Some facts not correct. The most noticeable of these is that Win Percy was not paralysed. This was Martin Sharpe, some years later

Nice set of photos. Here's one of mine I took

In the article you state that Big Sam was the car that started it all.. This is incorrect.. It was FFA 196L that Was the First..