Audi might have had the pace around the epic Spa-Francorchamps Grand Prix track – with an almost two second advantage in the dry – but they were forced to fight for their right to win this year’s Spa 24 Hours, the 63rd running of the historic race. At the start of the race, 62 GT cars blasted down towards Eau Rouge for the first of 545 times: barely half would make it the full 24 hours, and of those just a handful in anywhere near prime condition.

The race showed the best of GT racing: big packs of cars fighting tooth and nail around the 4 mile track for the whole 24 hours, with the new generation going up against established endurance veterans. Audi against Porsche. McLaren against Lamborghini. Also Mercedes, Ferrari, Corvette, BMW, Aston Martin, Lotus, Nissan, Dodge, Ford. Could there be a more impressive line-up of marques on track at one time?

The glamour of the pit girls balanced the beauty of Spa’s Ardennes forest surroundings. The punishing nature of the track was matched by the beer casualties stumbling around in the dark come midnight.

Endurance races are the right and proper environment to see GT cars. Sprints are all very well – but you can see touring cars knock seven shades out of each other for half an hour in the World Touring Car Championship or similar, and I for one like seeing the big sportscar brands take each other on over the longest period possible. The arena of battle doesn’t get much tougher than a 24 race. 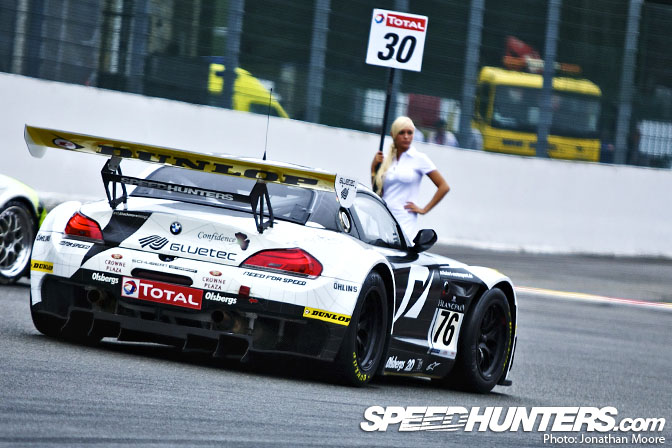 Even the grid at Spa presents its own challenges. Lining up 62 cars on the grid on the downhill run to Eau Rouge meant the cars snaked all the way back up the hill, round La Source and onto the F1 pit straight. From 49th position, where Team Need For Speed’s #76 BMW Z4 lined up, there was an awfully long way to the front…

Conditions over the weekend were at best challenging, at worst treacherous. Claudia Hurtgen, taking the start in #76, got in the car to a backdrop of drizzle – not enough to warrant wet tyres, but enough to make the track slippery and the moisture hang in the trees that surround Spa. 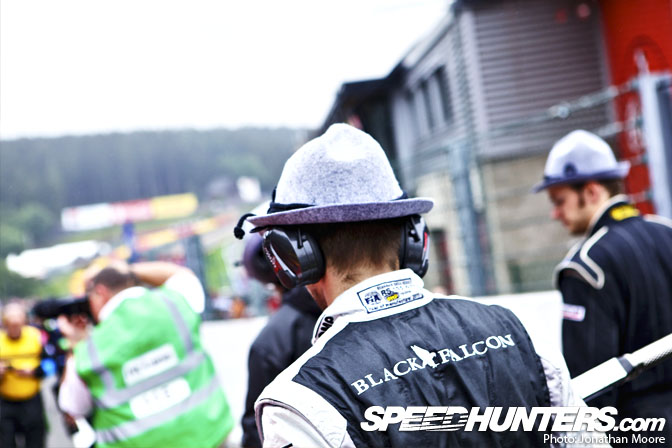 How many hats? On-track challenges extended to the sartorial: were Black Falcon’s mechanics going up against our own Speedhunters’s headgear elite?!

McLaren’s trio of MP4-12Cs lined up across two adjacent rows on the grid: handy for the team and photographers. Expectations were cautious but at the same time high – the car had the legacy of the F1 GTR to live up to, after all. 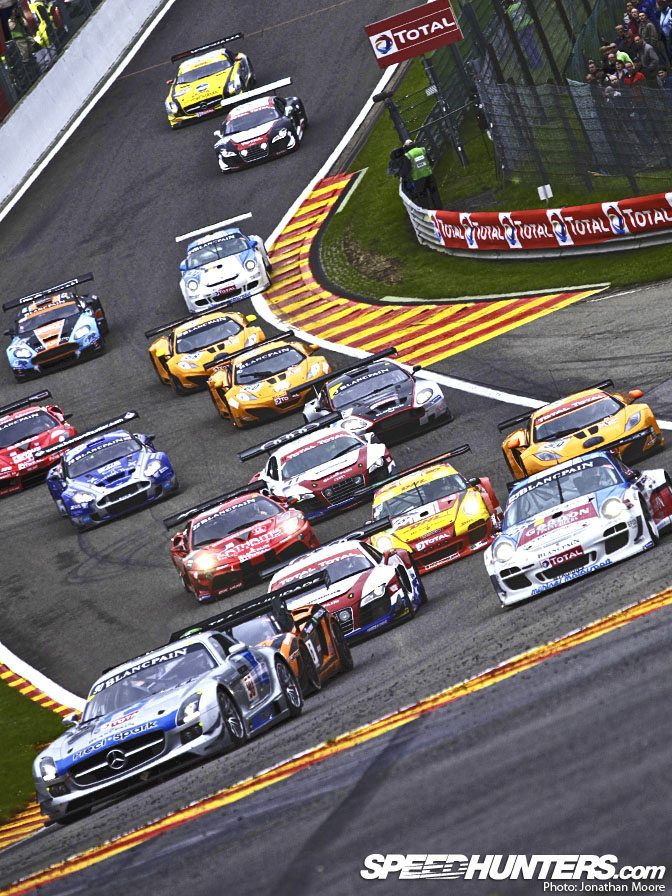 Green lights. Saturday, 4pm. As we hunkered down at Eau Rouge the pack came scything down the opposite hill, almost silently with the wind against us, but as they fanned-out through Eau Rouge the massive wave of noise the 62 GT cars produced pushed us back as they swept through to take the first lap. Three-wide into Eau Rouge? Only on an opening lap, as bravado overtook prudence. One-lap glory never works in the context of a 24 hour race. 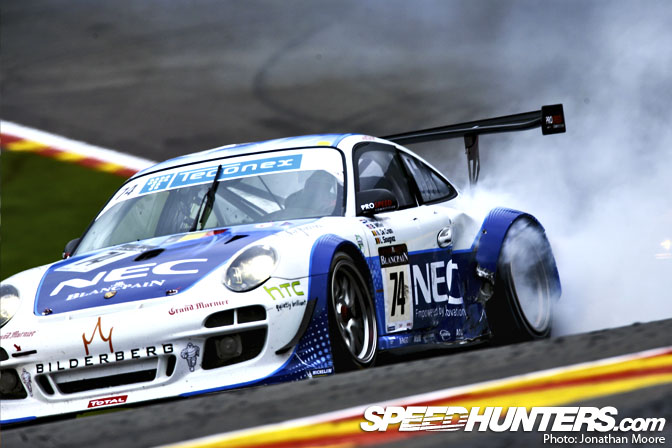 And so it was. In the opening hours, the Porsche and Lamborghini challenges disintegrated: figuratively in the case of the Prospeed team’s collision, where the #74 911 took a ludicrously over-optimistic lunge at the Bus Stop chicane at Peter Kox in the #24 Reiter Gallardo, and then used his #75 team-mate – who was leading at the time – as the method of braking for the corner. Cue two crippled 911s and an apoplectic team. 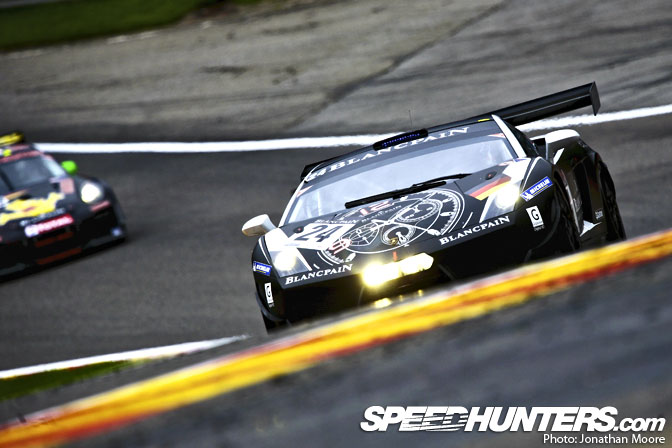 As in Dubai back in January the Reiter Lamborghinis were fast but fragile: Kox survived the Porsche assault only to succumb to a blown engine just after the end of the third hour, whilst the #24 car of regular GT3 pairing of Nikolaus Mayr-Meinhof and Albert Von Thurn Und Taxis somehow ended up on its side in one of the most bizarre accidents I’ve ever seen, at the entrance to the pit-lane. 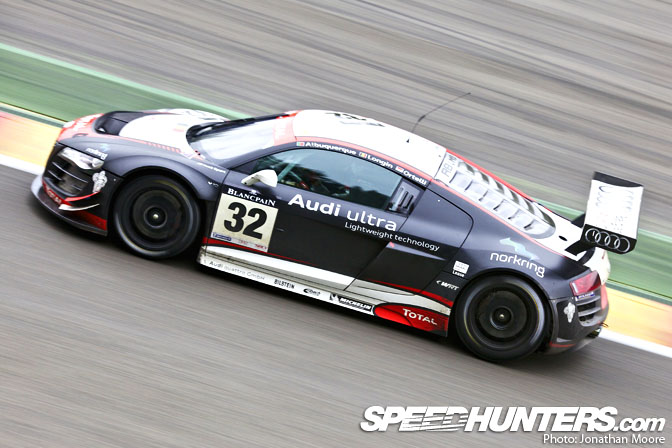 Even the privateer United Autosports trio of R8s featured a host of ex-F1 pilots amongst its 12 drivers, but a series of problems for all three R8s blunted their challenge in the Pro-Am class.

Audi took this attack on the Spa 24 Hours very seriously: they prepared the quartet of Pro cars on behalf of the entrant teams, bringing an unrivalled level of support – and an enormous hospitality area. From three hours in an Audi was always at the head of the field.

Initially it was the Phoenix team who had the upper hand, with both the #98 and #99 R8s in the top three by midnight, sandwiching the #33 WRT car – until gearbox problems slowed #98 in the small hours of the morning and #99 crashed out just a couple of hours later.

For the WRT team, French GT veteran Stephane Ortelli was dicing near the front when he collided with the #35 Black Falcon Mercedes SLS, pitching both off – he got a drive-through which put that car on the back foot. The #33 sister car, however, hardly put a wheel wrong for the 24 hours, laying the foundation for its eventual win.

The rather basic-looking Haribo stickers on the Manthey Porsche meant I thought it was a Cup car at first: the paint job gave it none of the poise or attractive back-end girth of the other GT3Rs in the Pro and Pro-Am classes. But Manthey’s usual bulletproof luck was turned over by continual problems through the race: a gearbox change and then fire in the pit-lane being the more serious of a litany of problems the #888 car had to overcome.

In the end the best Porsche finished a lowly 17th – the #19 Level Racing 911 also winning the Gentlemen’s Trophy. The challenge in the Pro GT3 class had long ago disappeared… Hardly a glorious day for the Stuttgart brand.

This is a car opposite to the Manthey Porsche for me, where the livery made all the difference: the Delahaye Racing Corvette Z06. This is a car that had some terribly basic paint jobs in GT3 over previous years(despite being a winner), whereas the Red Bull deep blue really gave the car some presence on track. 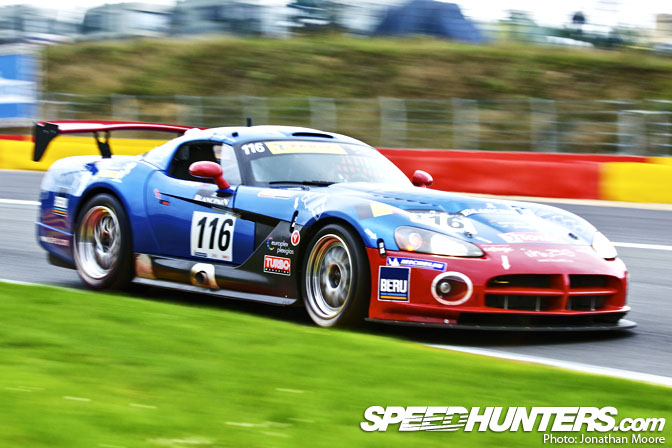 Back in the Gentlemens’ Trophy were two Vipers: to me this iteration has never matched the pit bull stance of the original – especially when you see that the entire long tail is just one vacuous shell of fibreglass when it’s knocked off… However, they were still interesting cars to see hooning round the track, and were obviously a handful for the amateur drivers! 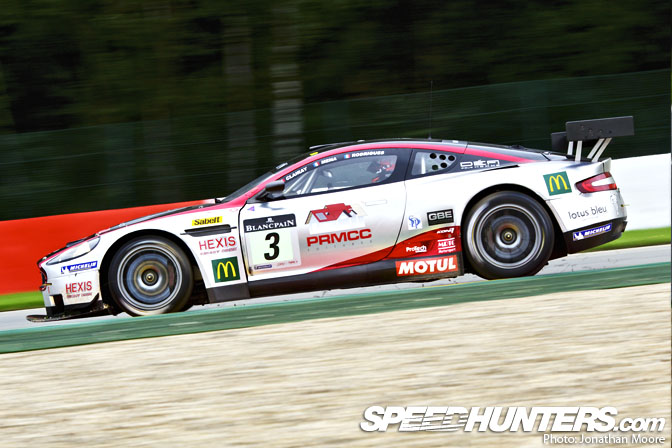 The fire-breathing old Aston DBRS9s of Hexis, Ecurie Ecosse and GPR were as welcome to see as ever: these cars might be getting long in the tooth, but still look great – and are fast to boot. The Hexis team’s #3 DBRS9 ended up eighth by the flag (despite the incident below), with its sister car 15th.

There isn’t really an easy corner at Spa, as Julien Rodrigues in #3 found out right in front of me in the early evening. A video of the incident starts off with a great shot of just how much effort it takes to pilot a GT3 car up through Eau Rouge (check out the amount of kerb taken on the exit at Raidillon) and then shows the Aston off in the gravel – just in front of where I was standing. 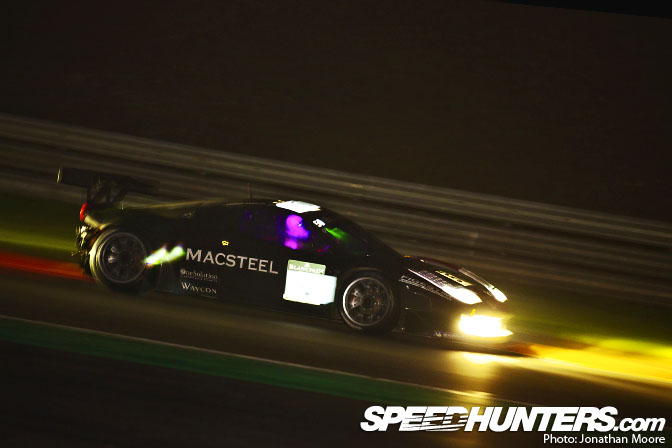 This kind of seemingly small accident was enough to put many potentially winning cars out of contention. Add in any kind of engine or gearbox malady and your race would be over. This year’s running of the Spa 24 was all about consistency and accuracy, especially through the night. 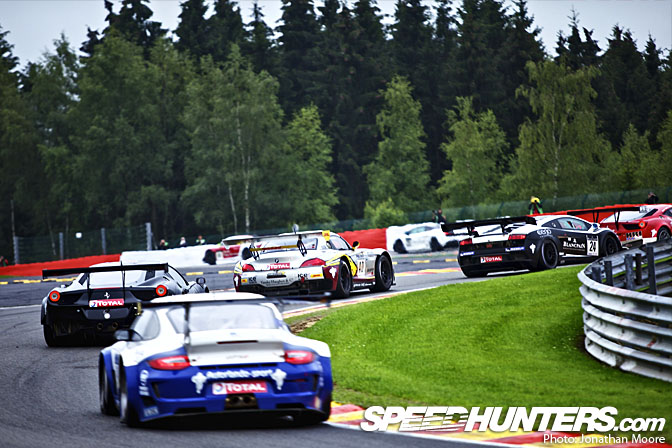 On a track like this, and with so many cars, the action is relentless on track. On some corners it felt like your neck was ready to snap off, as you constantly pan left and right for the next clutch of cars to come howling past. It requires intense concentration by all the drivers to get round quickly and safely – faster drivers are looking for every opportunity to make up time through traffic; lapped cars are locked in their own struggles as leaders come through; and slow cars recovering to the pits create mobile hazards often resulting in last-minute desperate avoidance by following cars.

At night time the challenges of the racing envirnoment at Spa become even clearer. The pitch black Spa track gives no favours to the drivers: there is no artificial light whatsoever to help the drivers see, so as they were dragged out of their cars at the end of stints their eyes would be out on stalks and their bodies crumbled by the effort.

Danger multiplies in the dark: all the above factors become more serious during the night, as the blinding headlights phase out the mirrors of cars in front. You’re driving blind on instinct, trust and a ridiculous level of belief. Would belief get the survivors through the night?

A Year Is Never Enough… 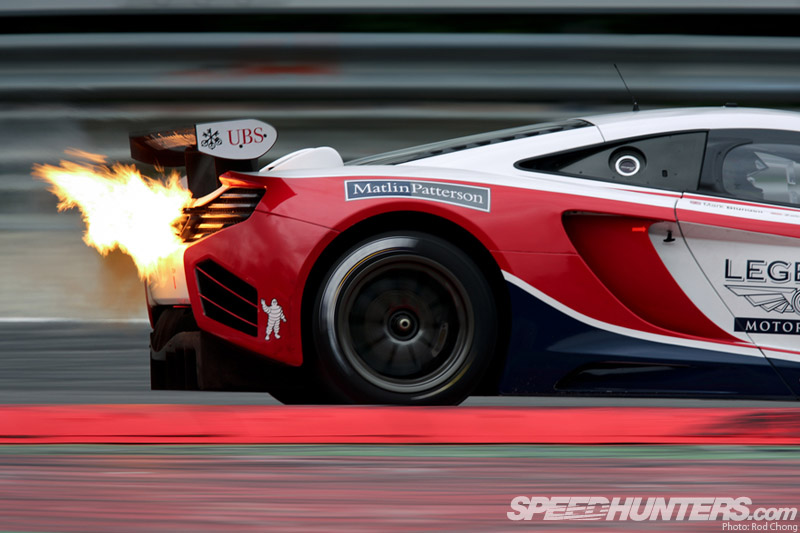 original viper had a face only a mother could love. the newer viper racecars and road cars look much, much better imo.

am i the only one thats sorta getting fed up of seeing red bull everywhere?!

Isn't that taxis guy a prince or something like that?

I thought the guy with the track was Rod Chong, haha.