The Tokyo Auto Salon is maddness, pure maddness. Having attended SEMA for the first time last year and now  TAS, I can safely say that the Auto Salon is in a class of its own. First there's the shear amount of quality cars, then throngs of people everywhere, and to top it off, you receive a sensory overload to all the senses at almost every exhibitor booth.

The doors opened on the first day to welcome the press and media. First order of business for the day was to meet up with fellow Speedhunter, Dino Dalle Carbonare. I love the fact that his name sounds like some mysterious yet delicious Italian dish.

Like Dino during TAS set up day, I also fell in love with this Crown Majesta from D'custom Freak. The white painted lettering on the tires really helps it give that sporty look.

This slammed 1989 Nissan Sunny pickup truck was of particular interest to me. The original motor was ripped out and replaced with a INZ-FXE hybrid motor from a Toyota Prius!

One of the many surprises of the show was the appearance of Veilside who has been missing from TAS for the past 5 years. Can you believe that this started off as a Mark 4 Supra?

This is a car I had to do a double take on. A Hakosuka front-ended Nissan Stagea! It even has the metal Hakosuka bumpers in the rear.

Here's a car I never thought I'd see in person, the hyper blinged out D.A.D. Mercedes SL.

Rocky Auto made an appearance with their 240ZG.

Another surprise of the show, a Rocket Bunny kitted S13 on some Dayton-like wire wheels. Never thought I'd be writing those things in the same sentence…. 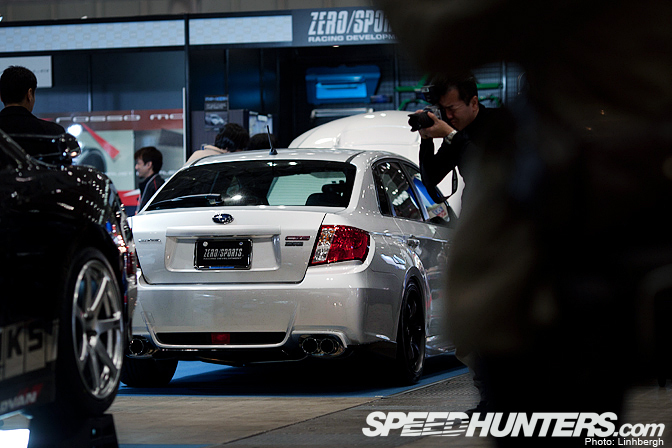 What an awesome jacket.

A little after lunch, D1GP held a 2011 kick off exhibition event in a nearby car park. It seemed so long ago since I last shot a bit of drifting and shooting some D1 action for the first time isn't a bad way to start the year….

As many of us know, Daijiro Inada and Keichi Tsuchya both left the D1GP Corporation not too long ago. So this exhibition event was an opportune time to introduce the new judges to the public.

The crowd was completely enthralled with the opening ceremonies and also with ManaP introducing the new judges. D1GP has a whole different atmosphere compared to Formula D….

It wasn't too long until the on-track action flared up. Eight car tandem? You'll hear no complaints from me.

I have to say that the highlight of the day weren't the cars of TAS or the D1 action, but instead, man's amazing hair. I'm sure he became a bit creeped out by constant staring. I couldn't stop being so amazed.

I did a bit more exploring when I got back inside the convention halls. This VIP'd out Toyota Celsior became one of my favorite cars of the show.

I tried to get a shot from the front, but was completely blocked by a girl and a throng of photographers.

A female in front of a car with a multitude of photographers was a common sight on the Auto Salon show floor. These frequent occurrences made shooting certain cars a bit difficult…

…but made for some great photographic opportunities. So many cameras.

In the Honda booth, I noticed this CR-Z. Looks like they're looking to get into some one-make racing with these hybrid hot-hatches.

A Nismo S-Tune'd Elgrand. Imagine taking the kids to school in this thing….

I was completely amazed when dancers appeared in the Nissan booth. What a way to get the crowd's attention!

I'll close this first installment of TAS coverage with this airbagged Artis Audi which has been wrapped in an alligator skin-like vinyl. Believe  when I say that this photo does not do it justice.

The Tokyo Auto Salon is a place filled with wonderful, awe inspiring and strange things. After a whole day walking the show and soaking in the sights, its hard to remember that it's only day one.

Going Back To School At TAS

That's not his hair, that's his crash helmet.

Nice coverage, but with those cute girls around you were noticing the cameras...?

That veilside supra looks like a Bentley! Not my cup of tea, but damn that's ballin!

That Supra really threw me off! I thought I could recognise a Supra without fail but I thought that was first a Bently then an Aston before I read what it really was! Insane stuff. And that Audi at the end... what the hell is going on with that?!

The 7 looks fantastic! The kit and the sky/white color match incredibly well!

anymore pics of the supra?

More on that ZG please!!!

Nice! Love the Celsior. A little on the fence on the Bentley'd Supra, but definitely still amazing work put into it. But I lol'd on the comment about the Elvis'd out Japanese man.

"Ah, he's beautiful." Jesse mumbled to Leon as they tried on various pairs of sunglasses while referring to Brain.

Please, for the love of mercy, make the stupid camber go away.

Not usually one to criticise but Veilside should go back to the drawing board with that abomination. Hopefully they'll take some inspiration from the likes of that fantastic looking Hakosuka front-ended Nissan Stagea

Wow, surprised they let Yokomaku in the show since all he wants to do is rip people off.

Wonder if he'll ever actually make the Surpa parts... or just charge customers for the parts and never deliver/make them.

the Rocketbunny S13 is on Carving Head Alloys. Not wire wheels

My brother visited Japan this summer. The D.A.D. Mercedes Benz SL's were on open display at the D.A.D. boutique in Osaka.

Wow, that CR-Z looks sick! Man wish the tuning culture was as rich in the states! But sadly I see a lot more crappy tuning than a real quality build. :/

I know for a fact those aren't Daytons on that S13 Bunny.. I believe they're OG Work's ...

I thought D1 disbanded or something

so any clue why veilside put their "exclusive brand" body kit on a supra lack of available bentley that it's ment for? + do we spot audi lights on that same car?

+ any pics of that toyota IQ in the back of the picture. Apparently that has gotten a concept kit as well?

veilside have ruined a jdm design classic .... im all for pushing the scene forward but imho its a bag of balls !!

dang that mark 4 supra is killer

side note: that could possibly be a stagea, but, they did make a short production of skyline wagons in that whole fascia. i've got a boxed model and a limited choro-Q of the wagon.

That RE FD3S needs a closer look...indeed. It looks absolutely stunning!

Car feature or spotlight on the Veilside Supra pls... wtf is that a bentley?

Car feature or spotlight on the Veilside Supra pls... wtf is that a bentley?

OMG i want that Hakosuka stagea

Wow, TAS used to have such amazing cars. What was it that killed it? High entry prices for the vendors?

Baba - It's a recycled kit. Yokomaku took the Premier4509 kit for the Bentley and chopped it up to fit on the Supra.

i love how the supra never ceases to continue evolving... i thought smokey nagata's v12 supra was the 'final evolution' of the car but i guess not! MK IV supra + luxury sport coupe = win

vasectomy for veilside supra yes please....ill use a knife if i have too

I beleive the audi is covered in some sorta carbon kevlar material?

I've seen MANY FD3S's but never have I seen one so perfectly formed in modified shape than THAT RE 3-rotor time attack.

Such a mesmerising mix of forceful presence and attitude, with the flowing, elegant, timeless beauty the FD is characteristic for, whilst STILL placing form before function..... Unreeaalll.

I'm desperate to see more - any danger of a Spotlight? More pics would be massively appreciated, but a spotlight, if possible, would make my 2011. For real. Pretty please???

I want that Nismo Elgrand so much!

Somebody should tell Veilside that people don't even like the ridiculous looking real 'Mansory' Bentley GT let alone a one off kitcar built on a Toyota Supra chassis.

The CR-Z looks more like a race car then I ever thought it would. I just hate that lack of power. I rarely take an interest in purely show cars but that Supra veilside made is ridiculous. I mean that in a good way as far as aesthetics go. A bad way in terms of racing and such. You can definitely tell that they put in some work and I'm digging the style for sure. I bet it looks really awkward popping that hood though because the engine looks over a foot away from where the front end is.

what are the wheels on the Crown Majesta from D'custom Freak???

SO ARE WE SURE THATS A ROCKET BUNNY KIT?

A week in Japan is not enough for a first timer. It's not enough time to experience all that Tokyo