The internal combustion engine. An essential part of every car on the road or track today, nobody would get excited about the power system of the Flintmoblie (and if you do, you are on the wrong website) so what is it that brings a petrol head to their knees at the sight of a really cool engine?

Carbon fibre is always a good starting point. Especially when said carbon is constructed into the intake system on a BMW V8 …

In fact you can never have to much carbon fibre what ever the application. F1 car in bare carbon, bad for sponsors but my god does it look good.

It's just a lump of metal. Well okay a beautifully machined, hand finished concept V16 engine block masquerading as a lump of metal. But just look at it, who wouldn't be proud to have this on display in their home? It's not engineering, it's art. 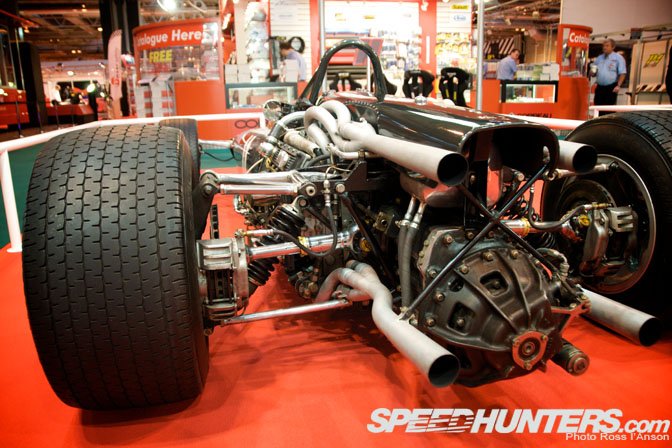 The detail in the BRM H16 is just staggering, baring in mind the tooling of the day consisted of men in sheds with files and single axis lathes and mills. The man-hours required to create such a thing beggars belief.

Radical Performance Engines use a mix of Formula 1 crank design and Moto GP head design to create lightweight compact V8s out of two motorbike engines.The unit pictured above is the RPC 3.2L V8, it delivers 420hp and over 10,000rpm weighing in at only 88kg.

Anyone into their MKII Escorts will recognize this, the famous BDA twin cam.

It's not just 'look but don't touch' engineering exotica on display. You can actually buy genuine used motorsport parts as well. Everything from Renault F1 gearbox components …

I had my eye on this Force India exhaust manifold. Would look great on my office wall I think.

A hand built billet V8 producing 800BHP (basically an F1 engine) you would have thought would produce more than enough power for any application… Not in this case. This amazing engine is only to be used as a fuel pump …

… for this! Yes, the Bloodhound SSC landspeed record car uses an 800hp F1 engine as a fuel pump. It has to deliver one tonne of high test peroxide (HTP) to the rocket motor in 22 seconds at 1200psi. This will take the car from 300mph to over 1000mph in a little over 20 seconds! Just think about that for a second, scary stuff!

This well dressed nitrous breathing 1UZ-FE is on its way to a rather special new home. Alot more coming on this in a month or two.

Walking through the engineering hall this injector test bed caught my eye. Its mesmerizing to watch the injectors running through different program cycles.

The amazing Megatron BMW M12 F1 engine,there are so many rumors surrounding this engine. The blocks used to build the engines came from used BMW 2002 road cars, because as they had already gone through many heat cycles the stresses in the metal had already been worked out? The blocks were left out side the work shop and the engineers were encouraged to urinate on them as urine contains high levels of ammonia witch contains nitrogen effectively nitriding the blocks making them stronger? What ever you believe about this engine the facts are 1500cc and 1500hp @ 5.2 bar of boost! Incredible.

I was trying to find a good example of the amazing machining processes used in creating these works of art and found this. Take one 125kg block of billet aluminum, put it into a modern 5 axis machining tool, add some very clever programming and you come out with this, a 7kg of billet crash helmet. The detailing is just breathtaking, down to the perforations in the padding and the webbing in the vents.

The M12 myths are just that, myths. ///M engineers have said during the E92 M3 launch that they only tried a used M10 from an old 1502 once, and it grenaded in the dyno. The blocks they actually used were brand new.

some pretty wild stuff in this post! don't know if i'd want to be wearing that helmet...lol..

The 1UZ-FE is a V8, not V6. I agree though, quite underrated in many circles.

that's indeed a w16. a v16 would have only two rows of cylinders and would be longer

firelizard ...yes, my bad, i meant v6, but then realised after statement, indeed the 1UZ-FE is course a v8

I haven't actually worn a helmet before, but is it really 7kg?

Considering I'm a 170cm Chinese dude, that's an additional 10% of my body weight... on my head

Interesting method used on the M12 wastegate plumbing. Considering that it's a twin scroll turbine. Or am i wrong?

I'd take all of them.

What about an F1 engine in my wagon, with a few tweaks on the manifolds to improve torque it should be fun....

This is exactly what I would like to see more of on Speedhunters, more technical stuff! Cool

Can we get a wallpaper of the BRM?

I just fell of my chair !

One of the best engineering pieces i've ever seen !

About dthe engine, BlueSlug that is a v16 engine because it's shape is like a V. To be a w16, it would look like W, which is 2 V8 engines welded side by side.

Yes, that is definentally a W16, but the first thing I noticed in that picture was the coffee cup. That just shows you how tired I am right now...

About that engine, BlueSlug the engine is really a v16, because it's shaped like a V. To be a w16 engine it would look like a W, which is like to v8 engines side by side.

With regards to the 'its not a v16 its a w16' posts, it goes of the basic config. If you looked at it end on then the basic shape would be a 'v' shape. Take for instance the w16 in the veyron, its a w16 cause its essentaly two v8s nailed together wheras that v 16 has staggered cylinders still giving the 'v' shape

Hey you might want to brush up on your reading skills...That's not just some "chromed out helmet"..That was, at first, a giant, heavy lump of solid aluminum. Then, sophisticated machinery was able to mill that lump down into the highly intricate shape of a helmet imitation. That is all one solid piece of metal! well perhaps the visor was a separate component but you get the idea...

TLOWE you are definitely wrong its a w16, read about the offset bores here

Awesome post, keep these pics coming! There has to be more!! More on the Burton stand and that BDT-E engine, 815hp from that is just insanity! Could you imagine that in an Escort MKII RS??!?!

Tan Yee Hou: That is a billet helmet used to show off their machining expertise. Normal helmets are of a composite construction and weigh a lot less than 7kg's.

Yes that V16 is a W16 and its not a concept but actually a Veyron block.

The Veyron engine would look very similar to the one in the picture, its not two wide angle V8s "nailed" together they are narrow angle V's same as the VR6 which is V6 with one cylinder head. The W16 in the Veyron looks like a V when viewed end on just google it and see.

About argument between V16 to W16 engine. Look the picture again carefully. It is the V16 engine which is originally made from Cizeta-Moroder V16T engine. 16 piston engine already come out long ago before Veyron born.

Nice work Ross, you MUST give us a wallpaper of that naked F1 car!!

I don't think the helmet is supposed to be worn. It's just a showpiece.

nice vid of the helmet being created.. http://www.youtube.com/watch?v=RnIvhlKT7SY

any hints on what is the new home for the UZ!?

I just WTF'ed at the 800HP Cosworth motor used as fuel pump : tremendous !

where is this event held? I'm pretty positive it's overseas because of all the cars that don't really race in the USA there. I'm an engineering student and this is definitely an event I'd like to plan a trip to in the future one day.

"The blocks used to build the engines came from used BMW 2002 road cars, because as they had already gone through many heat cycles the stresses in the metal had already been worked out? The blocks were left out side the work shop and the engineers were encouraged to urinate on them as urine contains high levels of ammonia witch contains nitrogen effectively nitriding the blocks making them stronger!"

No such thing as a single axis lathe or mill lol. You mean non-NC machinery - isn't much of a limitation lol nearly every good engineering feat in the world was done with manual machines.

first off, the video that Ross posted of that motor being made clearly states it's a W16

second, the Volkswagen-developed W16 (i.e. the one in the Veyron) is essentially two VR8 motors joined at the crank (as Matthew was saying). here is a photo of one, tell me if this looks like a W:

that's what I thought.

third, it is NOT the cizeta V16's motor, it looks nothing like that. the Cizeta's motor is "two 90° dohc flat-plane V8s in a single block", it looks like this: