This may be one of the most significant racecars in recent times……but isn’t that just a  Porsche 911 GT3?

Far removed from a Prius, Volt, or Insight, this Hybrid is a mobile laboratory for Porsche Motorsport as they develop Petrol-Electric Hybrid for road and race use. I was fortunate to see this new technology in action at Petit Le Mans, and with the help of John Brooks and Marshall Pruett of SPEED.com, we can look at the car in more detail.

The project started just under two years ago to support development of the Porsche 918 Spyder and Porsche Cayenne Hybrid SUV. The original plan was to run a Hybrid 911 at the Nurburgring 24 Hours, a race they almost ended up winning! More on this later.

Since then, Porsche have entered the car in to Intercontinental Le Mans Cup‘ races at Petit Le Mans and, next weekend at the  Zhuhai 1000km event in China. 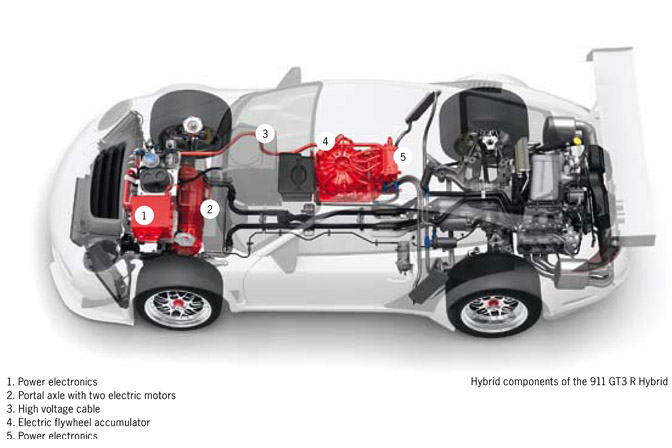 The heart of the Hybrid system is a Magnetically Loaded Composite flywheel, located where the passenger seat would be. This has been developed by the Hybrid division of Williams F1 team.

The hybrid system is separate to the normal 4.0 flat six engine.

The system creates an Electric charge under braking from the front wheels. This charge goes into a Power Converter unit, under the hood where it is converted from AC to DC.

This is sent to the Flywheel (above), spinning at 40,000rpm  where it becomes Kinetic energy. The driver can then use this energy for 6-8 seconds of Boost before it needs to be recharged again. Itt can give as much as 160 horsepower boast! As this boost is fed to the front wheels, the car effectively becomes an All wheel drive machine, which is controversial in the motorsport arena!

The car may have more power and able to put that power down better, but the Hybrid system does cause a weight penalty of 150lb. Brake wear is reduced, but tire wear is increased at the front. As an unknown quantity, the ACO have placed this car in its own class as it neither fits in GT2 or GT3 (Its probably closer to a GT3 car really).

The balance of the car has also been changed. With the Power convertor at the front, the fuel cell was split with the second tank in the passenger footwell. Not sure if I would be comfortable having a flywheel at 40,000rpm and a fuel tank by my side….

Externally, the car looks similar to the Porsche 911 GT3-R racecar which was introduced at the end of 2010. Aside from the livery, additional air intakes on the rear fender are the most obvious change.

So, how did it do in Competition?

Manthey Racing ran the car on its debut in the German VLN championship, finishing sixth overall. A good start to the program, but everyone was surprised by its pace come the Nurburgring 24 Hours in May. As you can read on Speedhunters, the Hybrid almost won the endurance event. A valve spring in the ‘old-school’ engine failed with just  two hours to go while in the lead.

Admittedly, the team had been lucky with a number of top entries falling out, but leading a 24 hour race is more than just luck.

BMW won the event, but most of the press centered on the 911 GT3-R Hybrid.

The Hybrid reappeared in September at Petit Le Mans, the finale of the American Le Mans Series and round two of the new Intercontinental Le MansCup. 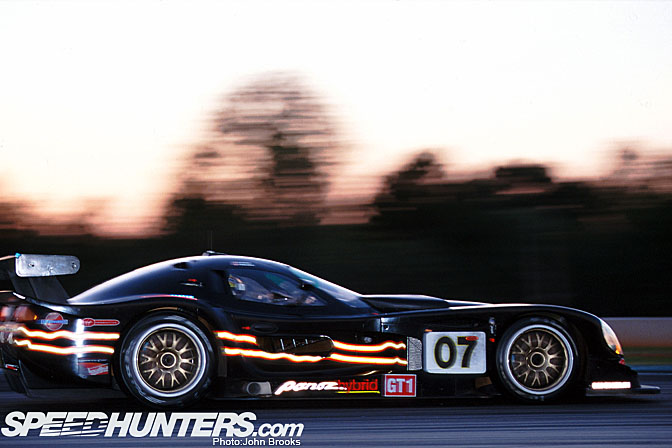 The ALMS have been leaders in Green racing and promoting Hybrid racing, so it was only natural for the car to appear in this series.  This wasn’t the first time a Hybrid had raced in the ALMS. Back in 1998, Panoz and David Price Racing ran a Panoz ‘Q9′ Hybrid nick-named ‘Sparky’. In recent years, Corsa Motorsports also ran a Zytek LMP Hybrid.

As a sign of how important this project is to Porsche, the team put the 2010 Le Mans Winners, Timo Bernhard/Mike Rockenfeller and Romain Dumas in the car, ‘borrowing’ from sister company, Audi. On this occasion, Flying Lizard Motorsport assisted with running the car.

The ‘all wheel drive’ system had an advantage during Wet practice at Road Atlanta, but come race day, in the dry, the car suffered from very heavy tyre wear.

The car eventually  finished 18th overall out of 41 cars, which would have been 8th in GT2 class.

As Speedhunters’ Tommy Milner was racing the # 92 Rahal Letterman Racing BMW M3 at Petit, I asked him for his thoughts….

“The thing that stood out the most about that car was, when the drivers were using the boost, that thing was FAST. You’d be right up on the bumper of it and normally you could just hang with it but if they hit the boost, it would drive away from me like it was a P1 car it seemed like. It was pretty impressive.

Otherwise the car seemed like it was somewhat competitive but not that close to us in terms of lap time. It never really factored in the race like I thought it would. It’s strength must have come at the Nurburgring with its fuel economy and not really its outright speed. Although I’m sure it had built up enough energy to use on the Dottinger Hohe every lap.”

The action moves to Zhuhai next weekend for the final round of the Intercontinental Le Mans Cup.

As to the future, it is not clear if and when the Hybrid will run again, but one would assume the ’11 Nurburgring 24 hourshas been penciled in. The ACO have not confirmed any Hybrid regulations for 2011, so if it did run again in the LMS or ALMS, it would have to run unclassified.

As a marketing exercise, this has ticked all the boxes with the car appearing on CNN, various new site, various green promitions and a number of magazine covers, but as an Engineering project, its is simply pioneering.

Hop over to Marshall Pruett’s in-depth analysis and gallery of the Porsche 911 GT3-Hybrid at SPEED.com.

Special thanks to Marshall for assisting with this article and John Brooks for additional Images. 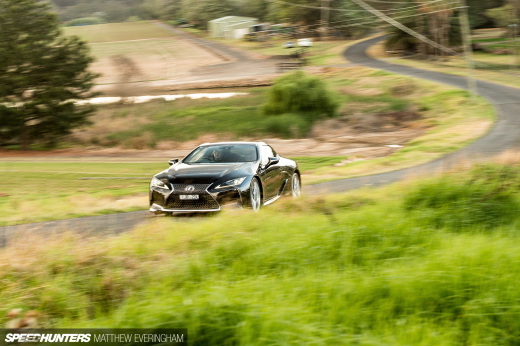 I'm doing the first comment here and it is not totally a nice one,

Oviously it's a pretty impressive system, which could not use all it's potential bacause of the safety car phases which worked against it's advantage in efficiency, but on the other hand the GT3 R Hybrid is homologated with a bigger tank than normal (or it just was at the 24 hours n the Nürburgring) an ran E10 at Road Atlanta while the GT2 cars ran E85. There is a difference in fuel efficiency between these two, so in my opinion there is no real possibility to compare it with the other cars on the racetrack, Balance of Performance just had to bring it together withe the other cars.

But it's impressive to see a full auto hybrid system race and survive endurance races.

It will be interesting to see if this technology will continue to progress and become increasingly competitive and/or end up in the consumer sports car market.

i think the concept/idea is great.. and it works BMW have all but perfected it! ,ove those back wheels..

"Not sure if I would be comfortable having a flywheel at 40,000rpm and a fuel tank by my side."

which is why you dont drive race cars.

brass balls man, they are needed to race cars at that level. ESPECIALLY with 40k rpm flywheels parked next to ethanol

I am just wondering, that how there is no gyroscope effect on such high angular moments... how on earth have they solved that one?

Love the article Andy and I love the car. Someday!

i am personally an environmentalist(from an argricultural perspective) , but that i feel Conflicts with my love of cars, and i have been dying to hear news of a mass-produced hybrid performance car. this could grow into something amazing!

great write up too (Y)

i think its great to see how far the hybrid has changed! id take this over a prius any day!!

BencE - According to Marshall's article (Linked above) on SPEED.com.  He advises ".....although the data acquisition sees small traces of the flywheel’s rotational movement on the G sensors, the forces are negligible but due damping within the flywheel housing."

Thom - As stated in the article, one of the first Hybrid race cars was the Panoz Q9 which run in 1998. Nine years before the Supra...

Not my idea of a "hybrid" vehicle. Seemsto be the KERS system that was trialled in F1 retro fitted. All the extra weight for a system that can supply power for 6-8 seconds and not get any better mileage. Nitrous maybe would have been a better option!!!!!!!!!!!!!!

@BencE- various dampeners I think. The system is identical to the one trialed on Williams Formula 1 cars a couple of years ago and the box in which the flywheel is mounted is nigh on indestructible- built using similar techniques and materials to the black boxes on aircraft.

@LS180, The system in the GT3R is not the same as the F1, its more powerful and they can use the boost more than 6-8s a lap. That time was due to F1 refulations restricitons on performance. Unlike Nitrous, it doesn't run out!

For those of you that have finished college or university and have moved on to your careers, think back