This is the final stop in our look at the Australian drag scene. I couldn't have picked a better shop, or car, to end this little tour of the highly impressive, power-crazy world that exists downunder. Welcome to JC Racing, a place that has built the fastest 1/4 chassis Mazda R100 in Australia. Out of all the astonishing cars that we saw during our busy week back in May this was the one that probably impressed me the most.

The compact dimensions of this seventies Mazda rotary is what makes JC's Mr. Rota such a wild car to look at. Charles, who organized our meet with the guys at JC Racing, did mention to Rod and I that the little R100 was pretty insane, but nothing can prepare you for the first encounter with this minute beast.

The car oozes presence from every angle but it's the rear that is particularly dramatic, I mean just look at the size of those rear drag slicks compared to the dimensions of the car! Awesome!

JC Racing is located a stone's throw away from Sydney Airport and like all the shops we visited during our time there was packed with an impressive selection of modified machinery.

But it was Mr. Rota we were over to see, a car that has been built…

and is driven and owned by Johnny Criticos, the man behind JC Racing.

We wasted no time checking out what makes this R100 such a unique beast, in particular the highly tuned 13B that lies in its engine bay.

To extract as much power as possible from the engine Johnny peripherally ported the 13B, a modification which calls for sealing off the factory side port on the rotor housing and creating an all-new round opening on the actual housing wall.

Here is Johnny holding up a peripherally ported housing while explaining how he went about carrying out the alteration. The two rotors were then fitted with special JC Racing apex seals, joined by a billet eccentric shaft and an intricate custom intake.

Air sucked through the GT42 Garrett turbine is compressed and sent through the massive intercooler into the engine where it meets with the copious amounts of fuel that are supplied by the twelve 1700 cc/min injectors. You can see the three fuel rails in the above pictures. Engine management is handled by a Microtech ECU. With this spec the little R100 has managed an impressive 8.177 sec pass at 165 mph. Johnny, now set on braking into the 7-seconds, has just replaced the GT42 with a bigger GT45 turbo which allows the 13B to develop 850 HP at the rear wheels, running 38 psi of boost.

A lot of effort went into making sure the interior looks just as good as the exterior! Johnny, from his racing seat, works the Liberty transmission selector as he shoots down the strip and tries to keep the little Mazda straight.

A great deal of work has gone into creating this R100 and Johnny is looking forward to push the car even further now that the bigger turbocharger has been fitted.

If you take a look at the 8.1 sec pass video you will understand why this wheelie bar is an essential piece of equipment!

…by these monsters at the rear!

We will be waiting for Johnny's next outing on track to see if he can break into the 7-seconds. The potential is definitely there.

I'd like to thank Johnny and his wife Lisa for allowing us into their shop to take a closer look at their creation. We wish them the best of luck for the future!

Don't forget to check out JC Racing's You Tube channel for lots more videos of Mr. Rota and other JC Racing built cars. 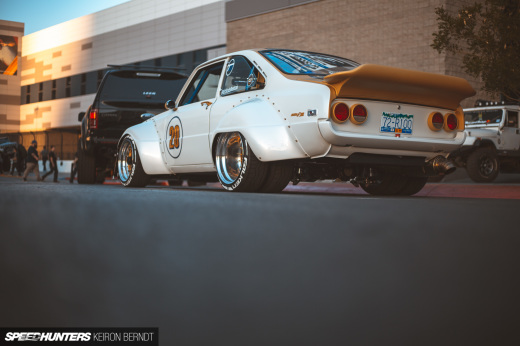 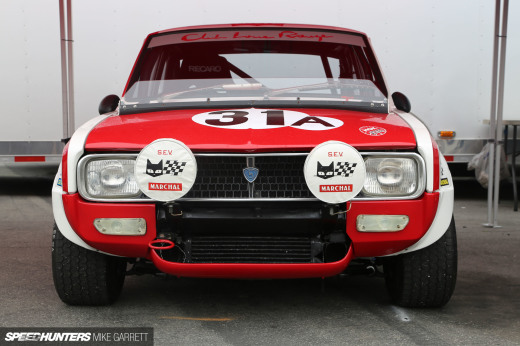 I absolutely love this car =D

Nice car! Greetings from, another John, back home Johnny!

CONVERTING JAPANESE CLASSICS INTO DRAG CARS IS A SIN...MAY THE CAR GODS SMITE YOUR BLAPHEMOUS WAYS....IM TIRED OF THE DRAG RACING CRAP. CHANGE THE WEBSITE NAME TO REDNECKHUNTERS.COM. MEANWHILE IN ...NORIYARO.COM!

have seen this car up close when it was being painted... absolutely flawless

i think it'll break 7 seconds.. i just wish i could be there to witness it trying out!

That is almost phucking ridiculous! WOW!

Good to see speedhunters is covering all types of motorsport.. including drag racing! At least this Japanese classic is still around instead of rusting in some junk yard.. what an AWESOME CAR.

Do you guys remember the crazy Mr. Rota Mazda R100 we featured back in 2010? Well it seems Johnny at