The Time Attack Series payed it's first ever visit to the Cadwell Park circuit for round 4 of the 2010 series. 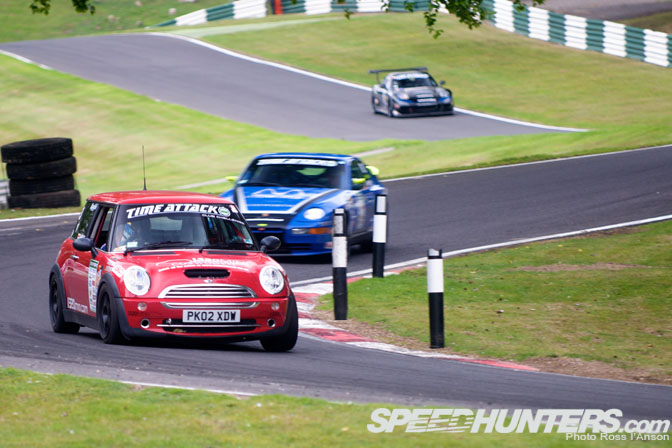 Deep in the heart of Lincolnshire, Cadwell is one of the jewels of the British race calendar. It's 2.1 miles of narrow undulating tarmac, snaking through the tree-lined Hall bends before opening out onto the balls out, super fast Coppice corner, then out into the countryside for Park,Chris curve and the Gooseneck before assaulting the infamous Mountain section.

It never fails to amaze me the diversity of cars found in Time attack. BMW, Fiat, Alfa Romeo, Lotus, are but a few mixed among the usual suspects from Japan.

Adam Foster in one of the many Minis was right up there after practice with a 1.42.169 just a fraction of second off the Evo 7 of Rob Cowling.

Mark Pollard was looking for another win in the N/A  class with a 140.294 in practice.

..With James Nicholls two seconds behind in 3rd place.

In the front wheel drive class Bo Nielsen was looking unstoppable and took the class win.

Scott Robson took the over all win in club class, lapping his Subaru in 1:39.654

With only one 15 minute session remaining and just a few tenths separating the pro runners it was going to be a tight session..

.. With James Nicholls just over a second quicker in 4th place..

Gareth Lloyd tried desperately to find a few 10ths  but couldn't beat his best of 1:32.255 and took second place..

Leaving Steve Guglielmi with stunning 1:31.903 to take his second win in row.

UK Time Attack final is on the 10th  October at Snetterton.

Wow looks like that was an awesome event can't wait to see wat they do next.

Sounds like a close event! Desktops of the first and last Lotus photos please?

Feature on the Lotus, please.

Awesome shots, and excellent event too! I was there myself, really great racing some cracking times as well. I'm kinda glad to see some of my shots had similar angles, but I struggled during the morning and early afternoon of actually getting anywhere near the track! Nice to see some of the action though!

They already made an feature on the Lotus.

Holy balls. Jeez, I lose track of all the awesomeness here, I guess. Thanks for the reminder, fellas!