I consider myself a pretty lucky guy. I have my dream job where I get to travel and shoot some of the finest motorsport man has to offer. Even in my first few months as a Speedhunter I've been fortunate enough to shoot rallying, drifting, time attack, touring cars, static shows, endurance racing along with getting to visit some very special places. Back in May I got to experience the twenty fours of Nurburgring. Even as I sit in the press centre typing this, the sound of automotive bliss is reverberating through the air as the GT1 cars prepare for a morning warmup session.

Some of you may remember the series of Speedjäger posts I prepared
after the event. This is pretty much the next in series, covering what
was my first FIA GT experience.

After two short flights I arrived into the searing heat of the south of France on Thursday afternoon. The event was of course the fourth round of the FIA GT1 World Championship at Paul Ricard. The event also featured the GT3, GT4 and Lamborghini Blancpain Super Trofeo series. Being Irish, I'm not really accustomed to such extreme heat. The closest I've experienced before was that moment where you've just sat into your car after it being parked in direct sunlight all day on the hottest day of the year. Unfortunately for me, there was no window I could roll down or AC to turn on. The heat was unrelenting.

Arriving at the Hotel Pullman, Palm Beach I met with the rest of the Speedhunters crew who were present to cover the event. I would be joining our commander in chief, Monsieur Rod Chong alongside Will Roegge and Jonathan Moore. It was the first time I'd met the guys in person and I was amazed to find them pretty much as I imagined them to be from their online personas.

The view from the hotel was something else. You always hear about how beautiful the south of France is but I was taken aback by the vista from our hotel.

Not ones to hang about, a 6am start was required on Friday morning to see us at the track for the first session at 9am. Although it's not my first sports car event, it was my first FIA GT event. You immediately notice the air of professionalism around the venue. Everything is organised and specified down to the meal vouchers on each day. Nothing is left to chance. Similarly, each of the teams are prepared to levels that I'd imagine would be expected at F1.

I sheepishly entered the pitlane during the first GT1 practice session. It was really here I began to appreciate the scale of the event. 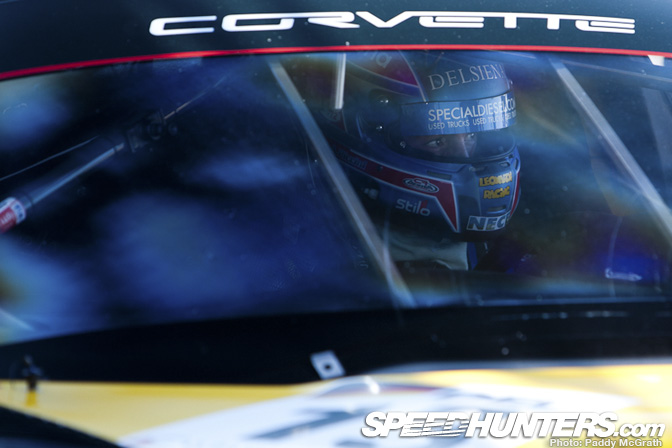 Watching the drivers and crews prepare was an eyeopener. Coming from a drift background where usually you just check if your wheel nuts are tight and then proceed to drive the stones off the car. Watching a team take notes on tire temperatures and pressures, adjusting minute settings and getting the driver to run another lap to see if the work was for better or worse.

Don't think I'm naive, I knew this stuff happened but when you see it on person you can truly appreciate the amount of energy, teamwork and concentration to prepare a world class race car. 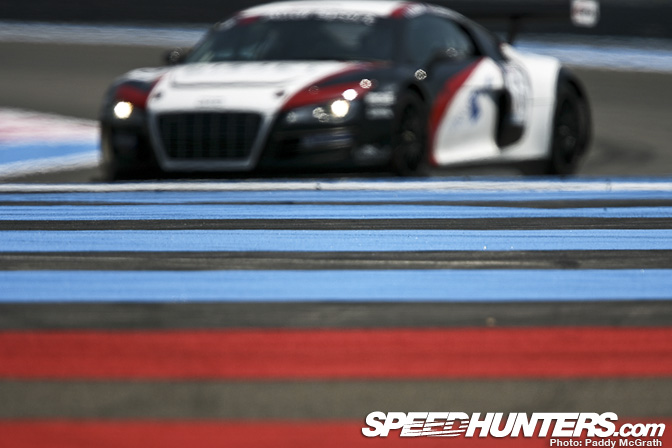 The Paul Ricard HTTT (High Tech Test Track) is quite unique in that it does not use any sort of gravel traps. Instead it uses different asphalt surfaces with increasing levels of adhesion. 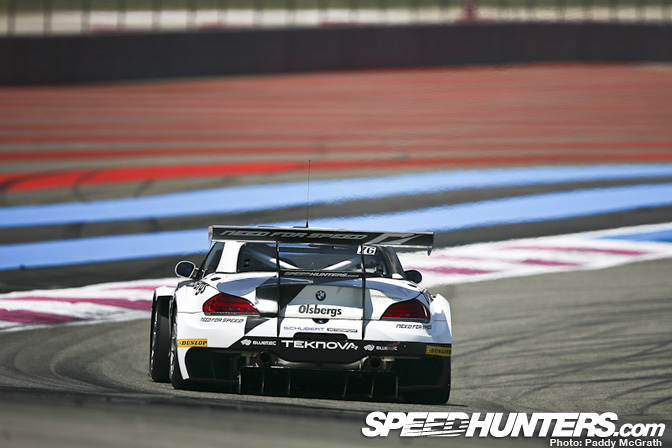 The blue areas have more grip than the track itself which gently slows the cars down should they run wide whilst the red areas are super abrasive and will slow down a car quite dramatically. A trip onto the red surface will see you back in the pits for a new set of tires.

I've seen our own Team NFS guys compete before at the Nordschleife but this was my first time seeing them race in the GT3 class for a sprint race. 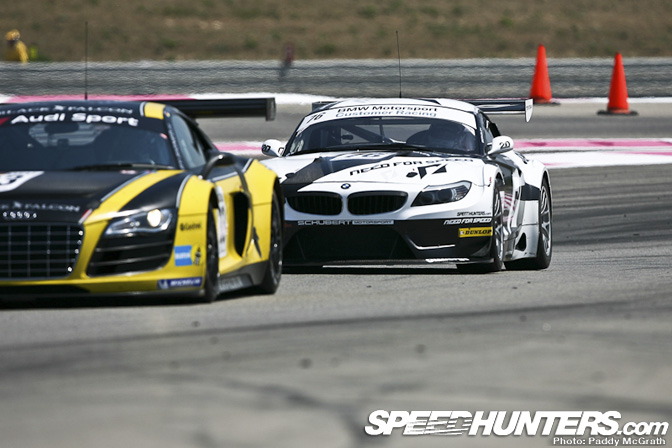 The competition looked tough, there was not a huge amount of time separating the field. 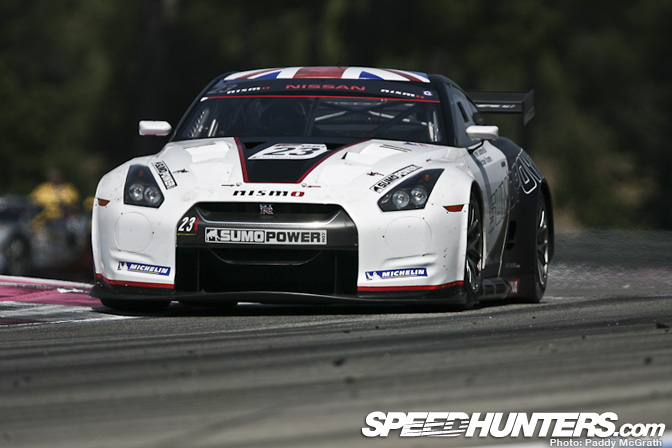 In the GT1 class I was paying close attention to the Sumo Power GT team after watching their impressive demonstration runs at Brands Hatch the weekend previous.

Their biggest rivals in GT1 would be the Vitaphone Maserati MC12s. These were not only fast but emitted a sound akin to the screams of a demon.

This Aston driver performed an entry worthy of any MSC event. Full marks for angle and speed but his line was off.

Another victim of the red stripes.

As the evening wore on, I spent some time in the Team NFS / Schubert garage. Here our own Edward Sandstrom prepares for a late evening practice.

Patrick brought the car in after a stint getting to know the Paul Ricard circuit.

He was third fastest in practice, an incredible achievment for a self confessed 'amatuer' driver.

Reflecting on what was clearly an impresive stint, Patrick was as modest ever saying that the car felt good and they could be competitive this weekend.

Whilst Patrick began to warm down, Edward had a look in his eyes of such intense concentration and focus.

Once the action on track finished, teams were left to making changes to cars, drivers were practicing driver swaps whilst the more unlucky teams faced a long night repairing the cars.

Heading back to the hotel for a late dinner to contemplate the days events, it was late to bed before another day of vitessehunting …

Very nice shots! Any chance you guys will attend the testday (FIA GT1,GT2,GT3 and GT4) at Spa next wednesday?

*sigh* The light is always nicer in the med...