Circle and dirt track racing is something that I had never experienced until the end of last year – when USAC had me come out to a Sprint Car race. The action is crazy: 800 horsepower, fire breathing, dirt ripping machines bombing around a dirt oval – that feels inadequate to contain such speed and power. The cars were three wheeling through the corners, pulling wheelies down the straights, and kicking up so much dirt that the walls had to be scraped clean between heats. Insane. 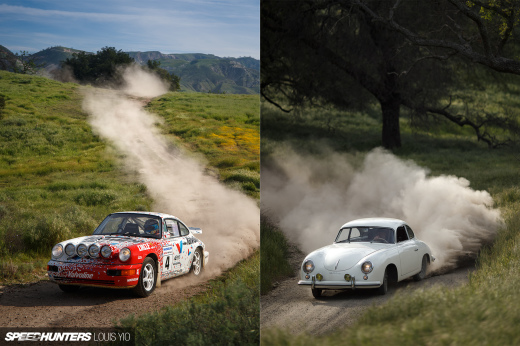 Any way you could consider a spotlight on a great driver, Dean Thompson from Gardena? 70s-80s sprint driver, deformed left hand that forced him to use custom steering wheel. Wasn't happy unless he :

1. was First in Qualifying

3. Took trophy in Trophy dash from BACK ROW

Seen him do it countless times.

Deano unfortunately has passed, but ALWAYS made time to sign every single autograph for every kid that even came NEAR him. Would take 2 minutes even when everyone was waiting on him, to allow a small 7-year old kid to dream for just a second longer while sitting in Deano's car going pbbbbbbbt pppppbbbbbbbbt!!!!! and giggling with the child. Me.

This is why sprinters are great. Racing at its finest.

You guys are covering REAL American racing????? I been attending Sprinters since 1975, Ascot Raceway in Gardena and Speedway 117 in San Diego on friday and saturday nights!. Umm drift community, these guys been sideways LONG before you! I am seriously stunned this is on Speedhunters, and impressed! It may be oval racing, but Sprinter Car racing is GREAT in person!!! Not too expensive also, and you surely aren't dealing with all the baggage attached to Neck-car racing.

Dang, that Video was so good it made me want to actually go to one of these races. very well done!

This was a really good video. Big fan of Will's and seeing Dirt racing was really cool - put together like this. Good for you SpeedHunters for stepping out and covering something different like this.

If you haven't been, you definitely should check out a race. The cars slide through the corners, races are quick for your limited attention span (mine at least :p), and the pits are open to everyone. Good people, good racing, good times.

Growing up, my grandfather was a sprint car driver. My childhood was filled with weekends at tracks in Calistoga, Sacramento, Fremont, etc. I would hide in the trailer so I could spend the races in the pits. When that didn't work I would be in the front row outside turn 4 waiting to be pelted with clay. Good times.

Will you should check out new zealand superstock racing, Not as fast as sprint cars but concrete walls and full contact. Just another crazy thing we kiwis do!

Pt 1 from a race in 1984 at Ascot Raceway in Gardena. The rest of the main event you can find on that page.

Thompson from 10th place to first, white-knuckle racing. One of the other leaders went on to manage Perris speedway for years.

Yeah thats wat im talkin about.. wingless sprints must be a pig to drive... Go the superstock racing!!! make it teams champs at palmy

what happened to the big wings they used to have???

These guys are sorta the Ams, while WoO guys are the pros. WoO sometimes race USAC guys, but USAC drivers aren't quite used to the extra downforce and speed. Whats better is when you can catch the rare race of WoO vs USAC but without the wings....its a whole other world of equal there, and the racing is off the charts.

Thanks again Roegge, and the video is great.

American motorsports at its finest. Few things are as good as a night at the dirt track.

This stuff will spoil you for anything else. Best racing on the planet.

This video is not available ;(

I have been raised around dirt track racing my whole life, and I'll tell ya it never gets old!