SHARE Retrospective>> The Works Fords – The Evolution To Awd

‘The side numbers were usually the first thing that spectators saw of my Escorts.’ These words from motoring legend Ari Vatanen, are for most, what epitomize the story of the Ford Escort. They were always driven the hardest and usually, the most sideways. In their prime, the Escorts won more rallies, races and rallycross events than any other car in the world. They were driven by some of the biggest names in rallying; Timo Makinen, Roger Clark, Hannu Mikola, Bjorn Waldegard, Ari Vatanen, Francois Delacour and Carloz Sainz. Even the late, great Colin McRae had his very own custom built MKII Escort that he used on many occasions as a competitive rally car. It was in the hands of Roger Clark (pictured above) that the Escort would take its first major win at the 1968 Circuit of Ireland rally.Talking to the press afterwards, Clark said that car 'drove faster than he could think.'  This is the Mark 1 model, often abbreviated to MKI and was powered by a Lotus built 1600cc twincam engine. 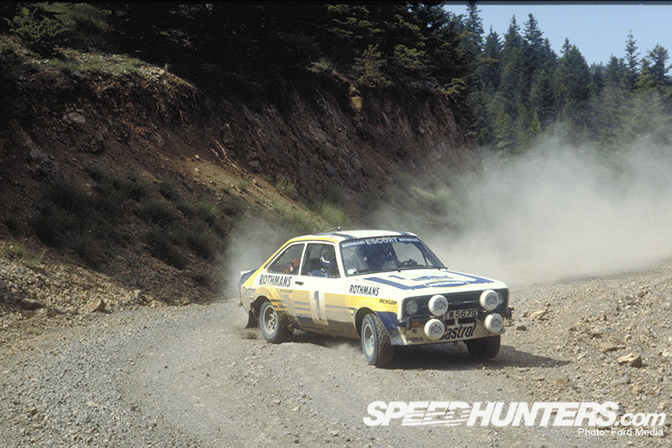 In 1975, Ford replaced MKI with the MKII, which is considered by many as the greatest rally car of all time. It still lives on today in many different countries, competing at local and classic events. 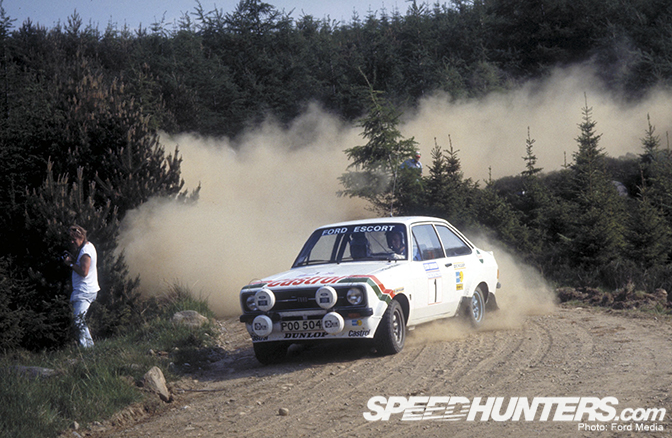 The MKII had an illustrious career, taking a world manufacturers title and drivers title in 1979 with Bjorn Waldegard.

These Rothmans colours make this car probably the most recognisable of the Escorts. The car was driven by Vatanen to a World Championship tite in 1981.

In all, the 2WD Escorts took 17 wins on the WRC stage from the 1970’s until the MKII’s works retirement at the end of the 1982 season. The cars were powered by a normally aspirated 1800cc four cylinder BDA engine that was developed by Cosworth. The engine produced 272bhp at 8,000 rpm in a car that weighed around 960kgs. The search for a successor to the MKII began back in 1977 and with 4WD still banned in rallying at the time, Ford had planned originally on launching a front wheel drive Escort but soon had developed a front engined, rear wheel drive Fiesta. The Fiesta was scrapped just as rumours of Audi were developing a new 4WD car emerged. The 4WD Audi's were to herald the beginning of the infamous Group B era …

Fords priority from 1983 was to develop and build a world beating Group B monster. The Ford RS200 began its world rally campaign in 1986, but just as the car became competitive, Group B was axed by the FIA. Although technically the car only competed on the world stage for several months, it was to become one of the most recognisable of all the Group B cars. The car was the first 4WD Ford WRC car. It was mid mounted, with the engine placed longitudinally behind the cockpit.

The car was powered by a 1.8 litre turbocharged version of the light alloy BD unit, known as the BD-T. In standard road trim, the engine produced 250bhp but produced 450bhp on the full tuned works rally and rallycross cars.

Before Group B was axed, Ford has planned to release an RS200 Evolution in 1987. Ford outsourced the engines to Brian Hart Ltd. Hart increased the engine capacity to 2.1 litres by completely redesigning the cyldiner block and before the axe fell on Group B, the cars were already producing 530bhp. Hart eventually produced 25 engines, most of which ended up in rallycross, which were making 600bhp. However, the daddy of them all was Martin Schanches 2.3 litre units which produced a massive 650bhp. 650bhp today is still considered a lot of power, can you imagine what 650bhp was like in the 80's ?

After Group B, Ford turned its attention to Group A rallying. Originally Ford ran the Sierra RS Cosworth but despite its successes in touring car racing, the car didn't prove to be that successful on the world rally stage. It was too heavy and the lack of traction became a big issue on wet rallies. But all was not lost, because in 1993 the infamous Escort Cosworth was unleashed …

The car was largely based on the XR4x4 Sierra Cosworth, featuring a 1998cc turbocharged YB Cosworth unit, which outputted 300bhp, as per Group A rally regulations.

In 1997, Ford facelifted the car and re-introduced it as simply, the Escort WRC. Between the RS & WRC versions, the car claimed 10 victories over the course of 6 years before it was retired in 1999 in favour of the Focus …

On its first rally, the Monte-Carlo, the car was immediately on the pace, with McRae and Sainz setting many fastest stage times. But due to a water pump irregularity, the car was excluded from the event.

This however only seemed to spur on McRae, where just two events later, the Focus took its maiden victory on the Safari Rally Kenya, the toughest event on the WRC calendar.

The engines for the Focus again were prepared by Cosworth, this time it was a 2.0 litre Zetec engine. Because peak power outputs are restricted, Cosworth concentrated on improving torque delivery on the low and mid range of the power curve. By 2000, reliability was up and peak power was nudged up by 20bhp at 6,000rpm.

The engines were required by regulations to retain the mass production cylinder blocks, heads and valve sizes, so Cosworth focused their attention on breathing, camshaft design and valve gear to raise the mid-engine performance. In the three seasons with Cosworth the Focus took no less than nine victories and 24 podium positions.

The Focus went through a series of changes, with the most radical being above in 2003 when M-Sport introduced all new aero parts which completely transformed the look of the car.

Back where it all began for Ford: Miko Hirvonen in the 2009 Focus WRC on the Irish stages. 40 years earlier, it was Roger Clark who took victory on the same shores.

With the Focus WRC, Ford have re-established their foothold on the World Rally stages. The Focus WRC is the third most successful rally car of all time, just behind the Impreza and the Lancia Delta. It's string of wins, including two back-to-back World Manufacturers Championships, puts Ford as the second most successful rally manufacturer in history, with 68 wins, just 6 behind Lancia but with 8 more than Citroen. How long will it take before Ford and the Focus becomes the most successful WRC team and car of all time ?

On July 19, two high-performance motorsport versions of the new 2009 Ford Fiesta will make their North American motorsports debut at the annual Pikes Peak International Hill Climb outside Colorado Springs, Colo. Driving the Olsbergs Motor Sport Evolution Fiestas will be four time Swedish Rallycross Champion Andreas Eriksson and World Rally and Ford Racing legend Marcus Grönholm. Together they will attempt to be the first team to break the 10-minute mark over the 12.4-mile, 156-turn pavement and gravel course.

It's hard to believe that it all started out with a 1600cc, RWD Escort …

Ford getting it so right...for Europe

Really cool to see all the history of Ford in Rally. Great Post, I liked it!

One of the most interesting articles evar...

Very good read!! Always good to see the history through to the modern age. And the Mk2 BDA's still win classic rallys now!!

great article... but after all, i miss pics of the sierras...

Damn that first WRC Focus looked so good back then and actually it still does in that Martini livery. And of course the RS200 is still a very cool car.

awesome post for a legendary brand !!! Mk II ans Mk I are top favorites in Greece ....

Anyone who loves amazing rally videos, this guy can satisfy your fix:

Wow. I'm a Ford technician, and I am awating delivery of a 2009 Fiesta Sport late august myself. But the Pikes Peak project was news to me.

Pikes Peak Fiesta looks insane (altough, not as insane as the Suzuki it needs to beat).

BTW. Eriksson is a Rallycross champion, not Rally.

If you are intersted in another interesting Mk 2 check out the Ari Vatenen in the Black Escort a car that was said to be too powerful even for him. http://www.youtube.com/watch?v=Pbl8LgLXwRo

Colin McRae also made himself a special Mk2 with a Millington engine and lots of trick Carbon fibre parts. http://www.youtube.com/watch?v=m1E-5_se44A

Also, I am looking forward to seeing Tanner Foust and Brian Deegan in Fiestas at the X Games this year. Could be good for a laugh

Hechtspeed... that is correct... Ollie Clark is Roger Clark's son.

Great article, but you make a mistake.

I love how you guys put super cool and fast cars up for people to look at and you guys get really good pictures of the cars.