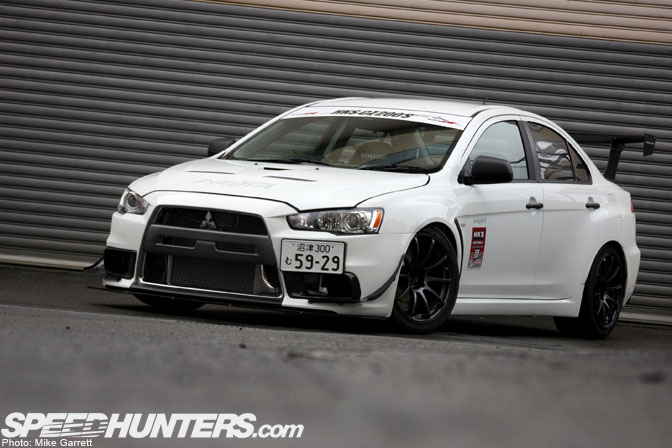 If you were looking for HKS at this year’s Tokyo Auto Salon, you may have been disappointed to find that the company didn’t have much of a presence this year. Like a lot of companies, HKS was forced to cut back on their TAS showing due to the economic turndown in Japan and around the world. They might not have had a proper booth at TAS 2009,but a few of HKS cars did manage to find their way into the show. For example, on display outside of the Makuhari Messe near the makeshift D1 course, was this rather unassuming white HKS-built Lancer Evolution X.

Compared to some of the other Evo X’s at Tokyo Auto Salon, the car looked pretty simple. There are no graphics, no polished wheels, not even a roll cage. At first glance you’d think this Evo X is your typical company “demo car” with a few bolt-on tuning parts, and not much else. That couldn’t be further from the truth. Say hello, to the HKS CZ200S, a car that is breaking new ground for both Evo X itself, and for street-going tuner cars in general.

When I was at the HKS factory last month shooting some of the other cars in one of the garages, I heard a low rumbling sound as a car pulled up outside. Saitou-san, who was helping us out, asked if I’d also like to shoot the “white Evo”. I guess the CZ200S was so “stealthy” that I had completely forgot about trying to shoot it on my HKS trip. Nonetheless, Saitou-san and the rest of the HKS crew members were so accommodating that happily let me have a look and shoot some photos of the new Evo. Unlike some of the other race cars I saw during my visit to HKS, the CZ200S is a 100% road-going machine that could easily perform duty as a daily driver. In fact, I’m pretty sure that when the car showed up to the shop, it had just returned from a trip to a restaurant down the road during lunch break…

The exterior of the CZ200S is very simple. There are a couple purely functional bolt-on aero parts that have been added, but all of the car’s body panels remain stock. This is pretty much as “sleeper” as a big company’s demo car can get.

With the exception of the GT wing mounted on the trunk, the car looks almost showroom stock from the rear. The rear diffuser is stock, but you might notice that the Evo X’s factory dual-outlet exhaust has been replaced with a single outlet HKS racing exhaust. To me, there has always been a cool, functional look on dual-outlet cars that have been converted to a single exit exhaust.

Here’s a closer look at the dry carbon Esprit 052 GT wing. Unlike a lot of the universal GT wings out there, this particular one is designed exclusively for use on the Evo X. It’s 100% functional, but it also matches the Evo X’s body lines quite well.

And now the most important part of the car – the engine bay. The Evo X’s 4B11 keeps its original displacement of 2.0 liters, but has been outfitted with a full array of HKS tuning parts. Some of them are still in prototype stage right now, but all the parts should eventually wind up as purchasable items in the HKS catalog.

The spec sheet reveals the following, starting first with the engine itself-

The biggest power increase comes from the prototype HKS GT3240 full turbine kit, which is mated to an HKS R-Type intercooler kit with HKS piping.

Electronic-wise, we have the following-

If there were an award for “world’s most famous” air filter, the HKS “mushroom” would probably get the title. In this case, it’s attached to an HKS “Super Power Flow Reloaded” intake kit.

Like a proper street car, the CZ200S retains its full interior, although the factory Recaros were swapped out for a pair of carbon fiber Bride Zeta III buckets with Takata racing harnesses.

Saitou-san made it very clear that keeping the car streetable and comfortable was one of HKS’s biggest goals with the project. The air conditioning works great, and when I was shooting inside the cockpit, I even managed to catch a whiff of that “new car smell”.

The stock Evo X steering wheel was replaced with a timeless Nardi Classic wheel, and you can see the lap meter and some of the other HKS electronic gadgets mounted there on the dash.The shift lever (with the classic HKS knob) is attached to a prototype HKS Motorsport six-speed mission. To stand up to all that horsepower and torque, HKS also outfitted the CZ200S with one of their heavy duty LA-type racing clutches.

All of the aero modifications can be found on the front of the car. There’s a set of HKS Racing canards, an HKS front under panel, and the black intake ducts in the bumper are from Ralliart. Typically we erase the license plate numbers when we feature street cars, but Saitou-san had no problem with us leaving the number plates uncovered. After all, it’s not like HKS keeps this thing parked in a driveway outside of their shop…

The CZ200’s suspension consists of a prototype set of HKS Hipermax III Sport coilovers, which were designed specifically for this car. The brakes are Endless – six pot in the front, and four pot in the rear, with Endless rotors and pads all around (of course).

Like all of the demo and race cars built by HKS, the CZ200S has Advan Racing wheels – more specifically Advan RS’s in 18″x10J all around. The offset in the front is +25, while the rear is a slightly more conservative +35. This mild stagger is something that you actually see pretty often on Evo’s in Japan. It helps give the front end a bit more bite in the corners and helps to rid the car of evil understeer.

The tires on the CZ200S are also worthy of a mention. They are Advans, but not the typical A048’s or A050 “S-tires” that you see on most track cars in Japan. In keeping with the CZ’s street car mission, the tires are the new and improved Advan Neova AD08 high performance street radials, sized 265/35/18 on all four corners.

The CZ200S may have been built to show the capabilities of a properly tuned street car, but that doesn’t mean HKS doesn’t take the car out for routine action on the track. A few months ago, HKS brought the CZ200S to Tsukuba Circuit where it turned in a lap time 59.495 with HKS’s main man NOB Taniguchi behind the wheel. That is an incredible performance for a full interior street car on sports radial tires.

I had the chance to see the CZ200S in action back in January during the HKS Premium Day at Fuji Speedway, and although it wasn’t running flat out time attack laps, I could still get a good idea of what this car is capable of.

I snapped this photo after I was done with the shoot when Saitou-san was loading the car onto the elevator to the garage. The CZ200S has a much more aggressive personality than a stock Evo X, but it’s nowhere near the point of being too difficult to drive or obnoxiously loud.

We have featured a ton of cars here on Speedhunters and they tend to be either dedicated race cars, or street cars built more for style over outright performance. The HKS CZ200S, however, is a complete package that drastically improves on everything the stock Evo X can do, while retaining all the friendliness and creature comforts of a brand new car.

I don’t think there are many other cars that you could take to Tsukuba during Japan’s hot and humid summer, spend the day running sub-one minute laps, and then drive home in comfort with the AC blasting in the middle of a summer rainstorm.

This CZ200S is what all street-tuned cars should aspire to be.

nice, kinda has that restrained feeling to it though

Wow, i loved reading this article, two thumbs up!

Badass car, I'm glad it has a sleeper look, I would love to have a car like this someday, haha.

Can i know what is "prototype HKS Motorsport six-speed mission". Is that the gearbox?

I believe HKS use to sell their own transmission way back in the days for the Silvia.

@tis: yes, Mike has lived in Japan for quite some time that now he calls "transmission" just "mission".....like Japanese people do......lol

Anyway, the EVO never been too much of a sleeper in my book.....haha

Nice post as usual Mike. Keep up the great work !

Where are the all out time attack evo X's? Is this the fastest so far? 59.4x is pretty quick. Curious to see what a dedicated evo X race car can do?

Ah. I never thought HKS can build a gearbox for a whole new car so quick. Road and track proven. Mike confused it more with the 'mission'. LOL.

I agree with everything but I have feeling that HKS Motorsports transmission would like $7k when its placed in production, and that wouldnt really make it "street friendly" to the pockets

@tis: You gotta remember, this is HKS. Among the Hewlands, Getrags, and Hollingers in the various tuning circles in Japan, HKS missions (from sequentials to dogmissions) are very popular. Just look at the GReddy D1 car. As big as GReddy is, HKS's biggest competitor, they're still trusting HKS to deliver the +550hp for Kawabata's S15 and 180SX.

Given the profile of this build, you know HKS was working their asses off to develop everything in record time. And as per their reputation, they did.

Yeah, I'm aware of what HKS can do. But I forgot 1 thing, Evo X were released in Japan like what, 1year earlier than other place in the world?

And, no wonder this car achieved +59sec tsukuba. It sure mainly because of the mission.=P

Don't forget about Taniguchi, lol. But yeah, this is a pretty damn good car. A real do-(a lot of it) kind of machine.

Wow, amazing. If I had to choose one car, I would choose this. And that dry carbon rear wing is pure pornography!

I never knew that the Trust D1 cars use HKS 'missions'. Nice to know that.

@Kevin, not sure if all of them are (the RE-Amemiya uses a Hewland because of Amemiya-san's experience with them, and not sure about Sakuma), but Kawabata thoroughly flogged his through 2007 to get the title.

Sub 60 second lap time @ Tsukuba on street tires is impressive any way you slice it.

A wallpaper for this would be awesome!

I remember reading somewhere that Japanese car manufacturers often give new production cars earlier to tuners like HKS so they could have aftermarket parts ready for sale when the cars were released to the general public.