With just a few weeks to go until the 2009 Formula D season opens on the streets of Long Beach, we've been getting a lot of fresh info regarding new drift cars and updates of current cars. The guys at Gardella Racing in New Jersey have just released some photos and info on the Pontiac Solstice that Ryan Tuerck will be driving in FD this season. In 2008, Tuerck had some nice showings in the capable, but simple-looking Solstice, and there's no doubt that he should be able to improve on that with this new car.

An earlier view of the naked chassis.

Ryan has been been testing the new car recently, and the team plans to have two additional testing sessions before loading up the Solstice for the trip to Long Beach in 2 and a half weeks.

Visually, the new Solstice seems to have a bit more character to it than the one Tuerck drove last year.

"Hampshaa" will be a driver to watch in 2009, especially behind the wheel of this new and improved car.

Thanks to Gary at Gardella Racing for the info and Nyce1's Photo for the pics. 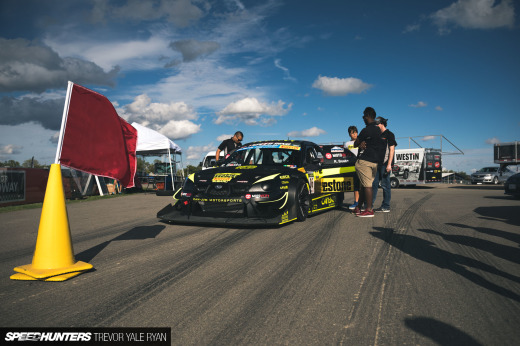 I don't notice any DA stickers.

Did he get any sponsors after GM rode the failwhale to failtopia?

A driver to watch in 2009? Are you kidding me? Get out of here with that ish.

This kind of cars is the reason i hate formula drift. So bland ugly and boring!

I agree with STJ

or course hampsha is still with DA

and when was hammpsha ever in a rex??

watch him HOLD IT DOWN this year

its interesting that he stuck with the solstice chassis without factory support. Hampshaa's gonna kill it this year.

Its good to see drag racers building drift cars. they do everything right. i wonder who will be next?

i think the car looks great! not a fan of the bumper but the paint scheme made it work.

I think this a nice improvment over last years setup. can't wait to see how he does in Atlanta in May.

This car is far to high and has completely ruined drifting forever. Imagine this car in tandem battle with the RMR Genesis, the huge speeds will be unexciting and look uncool. Remember drifting is only about looking cool. The damage is irreparable. How dare he build a capable competition car. Why aren't his tyres rubbing the arches?

i like it, big improvement from last years car

Someone's got Bugatti on the brain. Baby Veyron? Looks damn good. I gave up on that bumper and didn't think anyone could do anything with it. Tight.

yeah, this is pretty ugly

The rest looks pretty nice though, so let's see how it fares (at least we can compare it with Rhys Millen's!).

That front bumper is nasty! did they actually raise the car up this year, its higher than stock. paintjob could some help too

You have already seen our preview stories on the upcoming European drift season and the 2009 Japanese D1GP series, so now let's continue with a preview of the 2009 Formula Drift season, which will kick off in just over two weeks on the famous street

That is as close to a tube frame chassis as you can get. LOL.