The ACO released the provisional entry list for the 2009 24 Heures du Mans this morning. The ACO choose which entries to accept, based, mainly upon performances in the previous 24 Hour races, European and American Le Mans. 82 entries were received for 55 places.

The full list is available here, but I’ll just highlight a few of the cars to look out for.

Despite the economic crisis no fewer than 12 LMP1 cars have been entered. A three way battle between Audi, Peugeot and Aston Martin Lola.

Audi have three works entries accepted for their new R15, shown above. Kolles Racing, which competes in DTM has also been given 2 entries for their semi-works supported R10 TDi.

Four Peugeot 908 HDi FAP’s are entered, three works cars, and a surprising entry for Pescarolo Sport….Interesting given Henri Pescarolo’s negative comments on Diesels a couple of years ago. If you can’t beat them, join them!

Aston Martin also have three entries for their new Gulf Sponsored Lola based racecar. This will test for the first time in the second week of March.

Three Porsche RS Spyders are entered, including the Japanese Navi Team Goh entry, who won the 2004 Le Mans in an Audi R8. 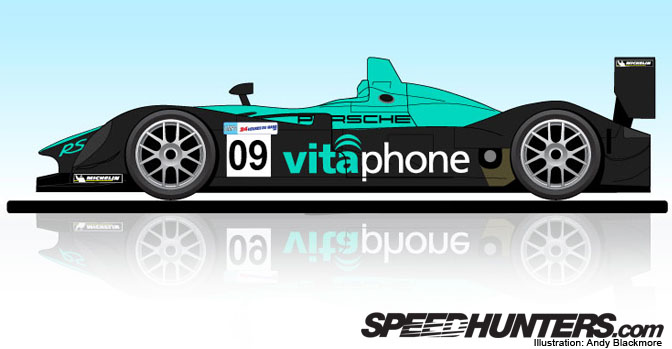 FiA GT runners, Vitaphone racing will also run a Porsche Spyder. I created a mock-up illustration a few days ago for Radio Le Mans, which you can see above.

Two Lola-Mazdas will run for RML and KSM. LMP2 also has a couple of other Mazda engine cars with Oak Racing, previously known as Saulnier.

This will be one of the last races for the GT1 Works Corvette, before the team concentrate on their new GT2 machine in the ALMS. The works team will be joined by privateer Corvettes, Aston Martins and two Lamborghini Murcielagos.

The Italian cars are  up against 3 Porsche 997, including a Flying Lizard entry, the Drayson Aston Martin V8 Vantage, and a Spyker.

Shame there isn’t more variety in GT2, given the entries in ALMS.

Teams always drop out, so the ACO have a reserve list of 10 cars.

sucks theres not very many Porsches

It's a shame that the petrol cars are getting a restrictor break this year and a Dome didn't make the cut.

No Nissan GT-R then?

these are a bit to soft for the nissan gtr.

Why don't the Japanese GT teams enter their gt500 cars in gt1 and gt300 cars into gt2? Wouldn't that be cool? Skyline vs. vettes? Cusco sti vs. Porsche gt3 vs. ferrari vs. ........ and so on? The rules between the two series can't be that different since Porsche gt3's compete in both Super GT and Lemans 24.

Headbanger - Yeah, I'm surprised how few there are too.

Cypher 09 - A little bit of a surprise about the Dome, but a few forums are carrying info that this car had no development since Sept 08 and its possible that Dome didn't even submit an entry. Who knows.

Ole- M - That car is/was still being devloped. Its also not 100% clear what exact regs the GT-R would run. Haven't heard anything about this car for a while now so maybe Carlos has put it on hold.

Ej25 - GT500/ GT300 have different rules to GT1/GT2. Much easier to go from a FiA GT class car and mod to GT300 as your devloping the car away from its stock origin. I don;t know enough about Super GT, but I'm sure some cars dont even have the stock chassis.

They have tried it but the GT500 cars are way to fast for the GT1's.

STJ - Agree, different rules (and costs) its like saying why don't McLaren race their F1 car in GP2.

LM-P2 Mazda (any of em) (and Hope for over all win... Mazda powered somthing)

I came to the pic of the Aston Martin and I froze in awe.

Well since this is just a provisional entry list, there could still be a couple of cars that can enter right?

Sad to see Dome ain't going to enter the S102 not entering as the car does seem competitive against some of the diesel cars. Also would love to see the Nissan GT-R compete in GT1, could make the GT1 battle with the Corvette a little more interesting and lastly, are Acura and BMW ever gonna compete in Le Mans or are they just gonna stick to ALMS?

Muzaffar - Very unlikely as there are 10 reserves...

GT1 is pretty much dead in its current form, so that wont happen.

BMW its unclear as the spec of the car may cause some issues, its all a bit cloudy at the moment. Long thread on Ten-Tenths about it. It may just race in North America.

Looking forward to seeing a 908 with a Pescarolo livery. The factory cars have always looked a bit unfinished to me. Good to see JLOC still plugging away!

Slip of the keyboard in the article, as pointed out by Martin Haven (welcome!), Team Goh won Le Mans in 2004, not 2008 Doh! I'll update the article.

ooooohhhh yeah #55 Lambo is in!

Amazing! Has to be the best sounding car ever to grace GT1

Nice to see a couple of customer DBR9's as well so at least Aston are being represented.

I dont think the BMW meets the ACO rules. I heard it doesnt even meet the ALMS rules currently!

The Audi R8 is only just testing now...plus, isn't that a GT3 car anyway?

Found this on Ten-Tenths... Seems EcoSpeed who are going to run the Dome forgot the deadline for entries. Doh...

Rémy Brouard of ACO confirms that ECOSpeed's entry was too late...

"The reason is simple. The request for the commitment of this team we came too late in relation to the closing date. But when you say too late, it's really VERY VERY late! It was therefore impossible to select against the teams, who had met the deadline."