I came across this special Corolla AE86 racecar earlier this year via Ten-Tenths.com, one of the premier Motorsport forums.

Forum member (and I notice, new Speedhunter) "Eircamae86", owns this very special car which has just 22 miles on the clock, Yes, thats right!

This racecar was originally built by TOM’s for Team Chowini in Hong Kong. The team ran a number of AE86’s in the 80’s, most of them carried the distinctive Chowini logo on the side and hood.

The car was originally built for the 1986 Macau Grand Prix, but the driver bailed out when funds didn’t materialise. The car was tested and then put into storage.

The car has seen little use since, hence the very low mileage. All the original bodywork is in place although the previous owner fitted a more recent 8 point roll-cage.

Before Eiracmae owned the car, it lived in Canada for a while before crossing the Atlantic to the UK, and now, its current home in the Republic of Ireland.

Here is some of the impressive spec:-

The car is now in Hibernation for a while. Eircamae tells Ten-Tenths “ I have no idea when she may get a run out again, I have only had it out twice, got a whole 1/2 a Lap in at the 1st attempt before setting off the tracks noise monitors, Fitted a home made exhaust 2nd time out but its was too restrictive which resulted in dirty plugs every minute or two".

“I want to keep her 100% original & bring it out every now & again but I think that I am going to have to fit an exhaust system & engine management as the 1986 TRD E-Prom ECU is a little out of date".

What a great find!

I’ll end Toyota month with this 'bonus' image from Eircamae, which I know Antonio will just love!!

If only I had seen this when I wrote the AE86 BTCC post last year, I had so much trouble finding any images of the BTCC championship winner. 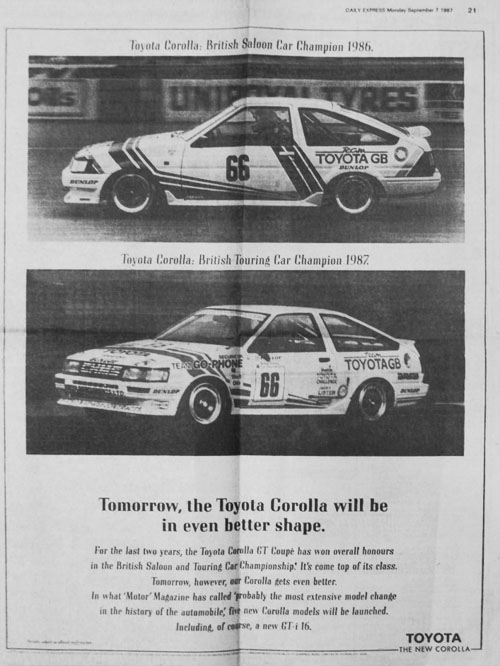 Thanks for sharing Eircamae. If you want to find out more info on Group A racing AE86's, click the Ten-Tenths link below

Thats amazing! Is it For Sale?

One of my favorite AE86 posts on Speedhunters and it wasn't even by Antonio LOL!

Wow! 22 miles?? thats an amazing feat in itself. I love the hibernation cryogenic bubble like device.

Awesome car. I wish I could see it in person!

Stories and finds like this is a great example of why SpeedHunters is so unique, great and on the ball. Thanks Andy, Antonio, Rod, Mike, John and thanks EA for SpeedHunters.

I hope this site will help EA make a better Need for Speeds, Can't wait for Shift. Why wasn't there a AE86 in Undercover!!!!

en6381, the link doesnt appear to be working, any chance of another attempt. Cheers Eircamae86.

Big thanks to Andy for contacting me & then blogging the car, nice one.

Cars not for sale Im afraid,

What a sad story.... Poor car never gets driven! The new owner needs to take it to a track that doesnt have noise restrictions.

ooooohhhhhhhppppppp........I went cross eyed again . Holly crap this is ....i have to leave the room.

Stray- read the article idiot, The car is going to get driven now that Ericamae owns it.

He's already put a 1/4 of the mileage on the car in a short time. it will get used.

As for noise - we are not spoilt for choice in Ireland

You're forgetting the most impressive thing about this car:

the car's VIN is half hachi-roku.

Nice to see my old Trueno I sold to Eircam also made it to Speedhunters.

That is of course when it still belonged to Eircam.

Funny thing was that I found those Cowinis 10K revmeters for sale in Finland. Some shop bought up old stock from them. But when I contacted the seller he just went bankrupt and the revmeters were unobtainable anymore. Maybe someone else is selling that stock now?

Banpei's old Trueno in there

What a AE86 ! i was wondering is it for sale, i really interested in.