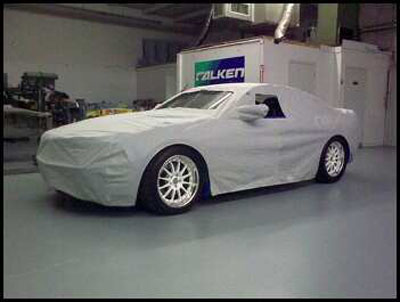 Speedhunter Vaughn Gittin Jr. just sent us a small teaser photo of his new 2010 Mustang drift car that he will be driving next year. The teaser may not reveal a whole lot, but it won't be too much longer until the full car is revealed next week on live Speed TV ahead of the car's official debut at the LA Auto Show. To see the car on Speed, November 18 at 8pm PST/ 11pm EST will be the time to tune in . I think it's pretty cool that the drift version of the car will debut ahead of the street car and can't wait to see what the finished product looks like.

it looks alot more slim then the previous car

yay for car companies and their model year designation practices!

Just a quick correction....All of the new 2010 mustang models will be revealed live on the speed channel on the 18th. Ford loves Drifting but I'm not sure enough to just reveal a drift car for the worlds first look at these new monsters. I think everyone will be impressed with the new 2010 Mustang's. They definately did an incredible job all around the board!!! I cant wait to take to cover off of this thing for everyone!

Has a Dope stance to it.

sweet! Its has wheels!

I hope it cmes to NFS Live, oh and can we have a right hand drive Stang for the British Isles?

I really like the livery that falken is going with on this one.

on the real though, can't wait to see it for real!