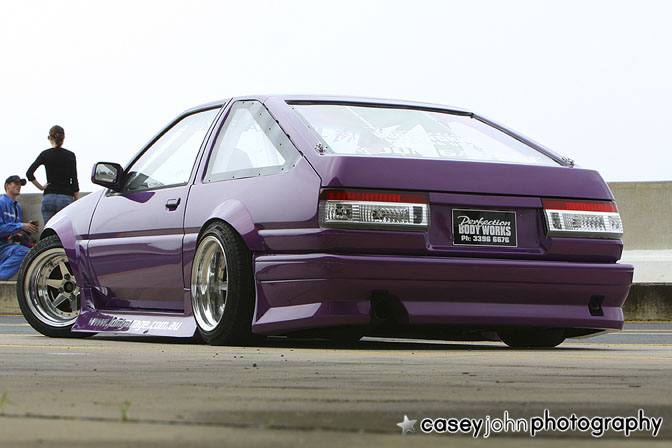 As we all know, Antonio is one of the biggest AE86 fans. He thought it would be a cool idea to post our favorite AE86's on august 6, Hachiroku day. I was browsing through some of the pictures I had and found this Hachi build by JDM Garage in Australia. I have many favorites but I had to choose one.

The car is owned by Brett Mattingley, it features a SR20 (yes I know) with a HKS turbo and Tomei goodies. The most noticeable are the custom build Longchamps XR4 wheels in 15×9.5. I know it will not be to everybody's taste, but I just like the overall look of the car. The only thing I would change are the rear lights, but hey nobody's perfect.

Even if I'am not a fan of swapped Hachi's, this one definately rock!!

i like the way it sits. dope. and i didnt even know they really made those rear tail lights. only seen those in video games.

i actually really like those tails, they remind me of upside-down m3-style lights for vw's

and yeah those wheels are just stunning

the tail lights are pretty cool. Gives a more modern look but the stance is so low i swore it was a toy at first glance. That is 1 super clean hatchi

no thanks, i totally dislike the body styling.

I think it looks cool but is it a Trueno or a Levin ? I'm not sure about the color...

this is a very clean AE86! definitely looks pretty cool!

P1err3: unless the owner did a facelift, most AE86s in Australia have Levin faces and Trueno rears.

I'm with Schnitzelsemmel : "no thanks, i totally dislike the body styling."

F- for the color

all in all its all good

It took Brett 2years to get that car to what that photo shows....

he made those wheels himself... He welded new outers to make the wheel of his width....

Bretts motto is "It's got to be low" so the whole car is built around that....

As for the colour.... The paint job was free, so who cares..... It's better than the white he had before.

Atleast you can tell bretts car apart from the other million white 86's out there....

i actually really like those tails, they remind me of upside-down m3-style lights for vw's

and yeah those wheels are just stunning

the shop that car came from is just up the road from me, its theyre signature colour and it looks amazing i reckon. also the chassis rails were chopped 2inch and plated and the rear floor was raised like 4inchs for the diff