Right now, I’m sitting in my hotel room in Frankfurt Germany, with the air conditioning turned up so cold I think my laptop might have icicles forming on it soon – just the way I like it! Walking through the airport in Frankfurt, I saw quite a few people who sort of look like Samuel Hubinette! After all, he looks very European (obviously – he’s from Sweden!), even though the car he drives in Formula D competition is straight up American muscle.

So to keep within the theme of all the drifting related content we’ve been posting up this month, I thought I’d put up some photos of Samuel Hubinette and his 2007 Dodge Viper SRT-10.

Some of you might know Samuel Hubinette from drifting videos circulating on the internet, in which he usually closes out his interviews with a peace sign, yelling “drift ya later dude” into the camera. LOL! Seriously though, Samuel Hubinette is quite a talented driver – he was the first champion of Formula Drift, winning the series championship in overall points, driving his menacing Viper Competition Coupe in the inaugural year of Formula D competition – 2004. 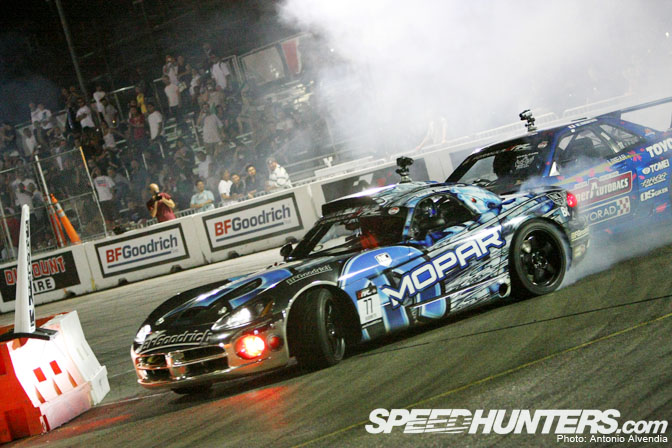 For the 2008 Formula D series, Samuel Hubinette returned to Formula D competition driving a Dodge Viper – however this time, it’s not a Comp Coupe, it’s a 825 horsepower (to the flywheel) Viper SRT-10, with 700lbs of torque (again, to the flywheel). 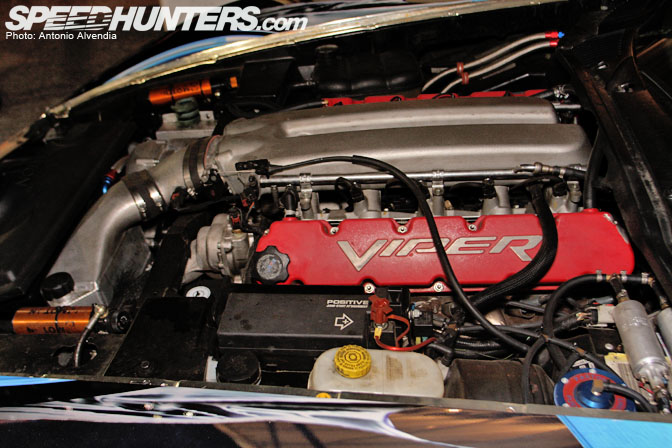 Eight hundred twenty five horsepower may sound insane to you – I know I personally wouldn’t know what to do with that much horsepower! I’m sure many of you are wondering about the engine modifications, so let’s run down some of the car’s specs real quick:

Modified by Nuformz
Tilton flywheel with an added weight ring

Samuel’s Viper has also been lightened by using alot of carbon fiber components – Autoform
doors, hood, deck lid, and a carbon fiber hardtop
roof with a custom drifting roof scoop by California Custom Paint
& Body. Up front, the SRT10 uses a carbon fiber front splitter from a Viper Comp Coupe. On the rear, you can also find a custom carbon fiber rear
package tray by SRT, as well as an APR wing (they sometimes run the car with the wing off).

When I asked Nuformz’s Shaun Carlson to send me a spec sheet for the Viper, he certainly didn’t leave out the details, and made sure to give props to all the “little guys” who have helped them out, not just the big sponsors. Here’s some more details on the car’s exterior paint and graphics, which certainly get the car noticed on the track – that is, if the loud roar of the V10 engine and the thick gobs of smoke billowing out of the rear fenderwells didn’t get your attention.

ChromeFX chrome paint by
the Alsa Corp: complete paint job
including body work and the application of the chrome done by Jesse Nevarez of
California Custom Paint & Body in Ontario, California.

Formed Lexan side and
rear windows by Pauly Rivera of Nuformz, out of Ontario, CA

When you open up the carbon fiber doors and look inside the car, you can’t help but notice the custom 1.75-inch 4130
chrome-moly Tig-welded roll cage with NASCAR-style door bars by Pauly of
Nuformz. I know the car looks a bit dirty in this photo, but there was a bunch of dust blowing around at the Formula D Las Vegas event, and the flash really brings it out and makes it look dustier than it really is.

Not much attention to aesthetic detail in the interior of this Viper, but oh well. It’s a race car I suppose. Check out the horn button-less Sparco steering wheel. The car also has a Sparco Halon fire
extinguisher system with five nozzles installed, as well as a Parker Pumper fresh air
system to keep Samuel cool inside the Viper!

Samuel has a new wheel sponsor for this season, which is why you might have noticed that his car is equipped with 18×10 (front) and 18×13 (rear) custom NC Forged lightweight wheels. However, he still rocks BF Goodrich G-Force T/A tires, which give him the control he needs when he’s drifting at high speeds – not to mention all the smoke they generate when he’s accelerating!

Behind the wheels, you can catch a small glimpse of the Mopar Competition Coupe parts installed onto this Viper SRT10 – Brembo 2 piece 14 inch slotted rotors and 4 piston calipers, Goodridge brake lines, and a Tilton brake proportioning valve.

I saw some Vipers out at the race track here in Germany the other day – they were part of a racing school experience, and alot of Germans were coming by to take photos with the cars. I thought it was kind of funny, cause I didn’t think much of those Vipers – they just looked normal and kind of boring actually. Just imagine how crazy the German car fans would go if they saw Samuel piloting his Formula D competition Viper at one of their tracks! Mopar seems like they have some pretty deep pockets… anyone else think they should ship one of Samuel’s Vipers out to Europe to have him do some drifting demos out here? I know I do!

i love sam's car. i was glad to see him back in the viper this season, looks so much better than the charger. the best version of his viper was the red one though.

i like the chrome pain very flashy, thats the only time i ever want to see it...lol

That ''drifting roof scoop'' is hideous to say the least.