It didn't set the world alight, but this new car has little development and no factory backing from Ford. In addition, the team only received the car on the morning of practice!

The Ford GT-R was born in March 2006 when Oliver Kuttner commissioned Doran Racing (from Grand-Am fame) to design and build a GT2 specification Ford GT. The project was totally independent of Ford, which given the history of the GT40, seems like a wasted opportunity for Ford. The only other car in ALMS GT without a factory base or backing is the Dodge Viper.

It transpires that the car build was easier than many in the past as the Ford GT was designed and built like a race car.

The chassis has been modified with wider track, roll cage, race suspension and brakes. The car is powered by a Roush Yates prepared 5.0 Litre engine with a six speed gearbox.

The bodywork has been replaced by carbon fibre components which include a front splitter and wide-body kit. The front  and rear clip has been simplified, removing many of the shut-lines and separate panels.

At the rear a large rear spoiler  and Gurney Flap helps downforce. The Robertson car (below) also uses Canards at the front.

Doran Racing plan to build a total of six race cars. The first chassis made its debut at the Sebring 12hrs earlier this year, with ex-Panoz team, Robertson Racing (above). Lack of race time and development have hindered their progress, but Doran are a race winning constructor, so expect them to move up the grid slowly although its hard to see them competing  with the top Porsche and Ferrari teams with their works developed cars.

While Robertson Racing have been plugging along, Doran Racing built Chassis 2 for  Falken sponsored ‘Black Swan Racing’. The famous Falken livery, which started life in Japanese GT racing adorned the GT2 racecar as it made its way on track last Friday, just hours after it arrived at the circuit.  Speedhunters.com published the very first image online! 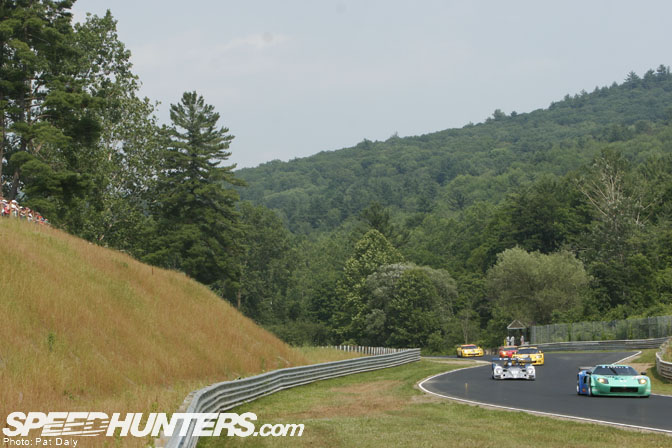 Given the tight deadline the aim for the team was to complete a race distance, so 8th in class in their first race was quite an achievement, given they lost time in practice while the car needed work to make it race-worthy.

They also earned points in the GT2 Championship, something Robertson Racing have been unable to achieve so far this season. 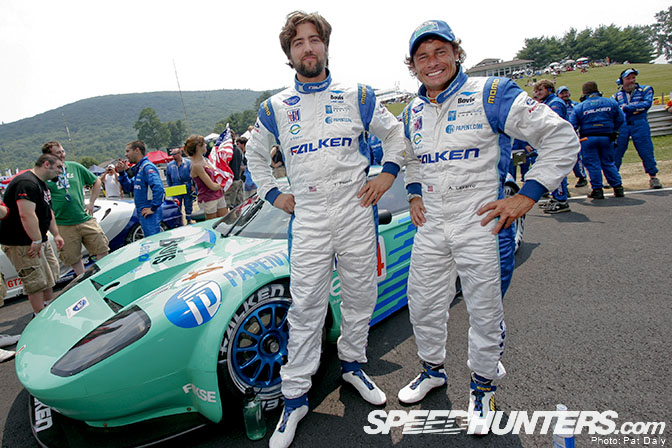 The Falken Ford GT-R will compete in the remaining rounds of the series, where race finishes and tyre development are the main priorities so the team has a good base line for 2009. Despite the big bucks in ALMS from Porsche, Ferrari and Audi, it is great to see that privateer teams can still compete.

While searching the internet, I came across these great images from "gio" on the Ford GT Forums.

The next ALMS race is this weekend in Mid-Ohio. In Thursday practice, the Falken car was 10th quickest in GT2, with the second Ford GT-R a place behind

In our earlier story of the Falken Ford GT-R a number of people queried the use of the GT-R designation. The 'R' signifies the racing version, although this was given by Doran Racing, rather than Ford.

This car is just so badass.

Great to see them being used as race cars. Ford definitely missed a HUGE opporotunity by not creating a works team! Imagine making history twice using a similar design some 40 years apart! I saw a Gulf livery GT at my local cruise in tonight.

Pat Daly sent some more images across, so these have been added to the article. Thanks Pat!

Pat Daly is awesome. His images are top notch, and he is THE MAN for picking me up at the airport and taking me to eat fried catfish & waffles at 600am on the morning of the Detroit Auto Show. More people should be like Pat Daly, he is a pillar of the Detroit Automotive Photography community. Respect son!

Anyone noticed the oil filter WIX? For years it's been said that is a total POS....without relevant evidence (you know those tough-e-thugs....lol)....than race companies like Falken uses them on their cars, and those people stop e-thugging......lol

I love the front of those cars; reminds me of S30.

Big ups for the folks @ Falken to step up their game to another level; although on the contrary many had forgotten the fact that this project was the main reason why their budget cut short on everything else.

is that the case D.Huang?

I was told by a couple of different people that Falken hadn't actually put mega-bucks into it (same way as Gulf with Arena Audi R8 a few years ago and possibly with Aston this yr...) but the team realised that full Falken livery would gain more publicity than, say a plain blue car.

That makes sense, D Huang, more money spent on ALMS naturally means less money to be spent on drifting and carshows. Hope that move pays off for them, but also hope they don't start cutting their drifting program, because their grassroots involvement in drifting and carshows is what turned their company around and started blowing up their name! I think their biggest assets were the PEOPLE they hired who used their endless drive and passion for drifting and other grassroots motorsports to get the company involved in the car community surrounding it... and in return, those people show support to them!

Andy, I'm sure they spent a lot of money... maybe not as much as Gulf and other big players, but alot of money no doubt! Speaking of which, I LOVE Gulf Ford GTs. Gorgeous.

Thanks a lot for the comments guys. The race was a blast even though I accidentally knelt in poison ivy to take a few of these photos. My knee is on fire and gross but I'm glad you liked the pictures. And I'm down for Catfish and Waffles any day Antonio. The Fried Chicken and Waffles are a few dollars cheaper so every now and then I have to switch it up so I can save up for a camera body that doesn't have a polka dot sensor haha.I look forward to doing some more ALMS coverage in the future hopefully, once I get this thing called college out of the way.

Oh btw Antonio, when are you guys going to start featuring fixed gear bikes on here? I heard through the grapevine you've been contemplating trading in your "86Life"-style for the fixed gear scene, hahaha

CARS with brakes are cooler than bicycles without brakes.

especially because you can't run negative camber, wheels with a 4 inch lip or rare steering wheels on a bicycle!

i saw it at road america. needs tuning, but the car is so f'ing bad ass. team falken ftmfw!!!