Yesterday it was back to Nikko Circuit for another mid-week drift meeting, this one held by Kazama Auto Service and Pit ORC.  As normal for this time of year in Japan, the weather was cloudy and warm, but fortunately the rain held off for the most part. After fighting a seemingly endless fleet of slow moving trucks on the highway, I arrived at Nikko Circuit to find tire smoke filling the air and a large number of cars already out on the course ripping it up.

What first struck my eye was Kazama Auto's JZX110 Mark II demo car pictured in the opening photo. This car happens to be featured on the cover of the latest issue
of Option2 magazine. Speaking of Option, Daijiro Inada was
also there with his green "Stream Z Jr." 180SX but I did not see him on
the track. Maybe he had some machine trouble? Nonetheless, he was still in really good spirits and was enjoying the event.

Like most drift events, there were several different classes based on driver skill level. Here we see a group waiting to enter the track. Check out how wide the front wheels are on the C33 Nissan Laurel in the middle!

While on the subject of that particular Laurel, take a look at this photo. THIS is why drifting at Nikko is so great. That front driver's side wheel has to be at least a foot or two in the air. You can also see sparks flying out from the undercarriage as it scrapes along the ground. Look at the expression on the passenger's face! Priceless.

This event also had a strong turnout from my fellow gaijin including the guys from Powervehicles and Newera. The Powervehicles JZX100 Mark II is an absolute beast!

Although it retains a mostly stock appearance, this 3-door AE86 Trueno was performing very well.

Here's the Newera Levin. A beautiful car with an even nicer sound.

Although it wasn't out there drifting, the Pit ORC JZS161 Aristo was so cool looking that I had to post a photo of it. Great fitment on the Advan wheels. I really like seeing Aristos that are tuned for performance instead of just VIP style.

This JZX81 Mark II was part of a group of three JZX81's at the event. All were sitting super low with very aggressive wheels. These are such cool looking cars, check out how long the trunk looks!

Here is the 180SX from the famous drift team Sexy Knights. The rear wheels are anodized, which is a pretty rare sight here in Japan.

Man there were tons of nice AE86's at Nikko. This is the same car from Ukiya Shoukai that I shot at Tsukuba back in the winter. It looks black in the photo but like the Do-Luck Supra Antonio shot, it's actually a deep purple color. Concave face TE37's are one of the best wheels ever.

This decal-less 180SX was another one of the day's top performers.

I almost never see R31 Skylines on the street, so it was really nice to see this one out there sliding around. The driver was quite talented as well.

The Powervehicles Mark II was dominating the category of smoke production.

It's not too often that you see a Y33 Nissan Cedric/Gloria at a drift event. Especially one with the Benz style front end conversion. 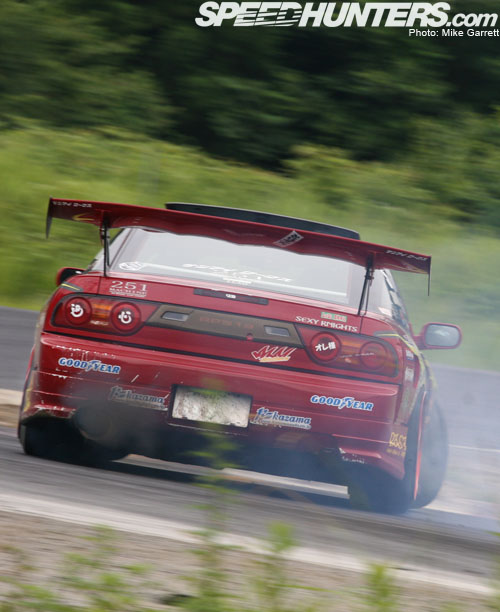 Another shot of the Sexy Style car.

I love the body color on the Syndicate S14.

The JZX81 group in the pits.

R32 Skyline takes to the air.

Another shot of the Sudou JZX90. I love everything about this car.

Another view of the Kazama JZX110 with its radioactive Gram Lights 57D's.

And in closing here is a shot of the driver of a JZZ30 Soarer desperately trying to save his car from spinning after entering the corner with too much angle. He may have spun, but at least it looks really dramatic in snap shot form.

I absolutely LOVE those boro boro dorisha being put thru hell and then some. Great pics Mike !

I loved this event! alot variety of the cars! that 180sx with the G35 back light conversion is sweet! never seen that done b4 even better its owned Daijiro Inada! i Love the JZX models would like to own one if i ever move outside the US! That R31 skyline is sick! never seen one at a drift event! overall great coverage mike! idk how u do anything besides car stuff with how often u post studd on here but keep it up! hey are u gona do some vido coverage again at one of these events in japan? i remember you bought some camera equipment while back for auto-otaku. just wondering love to here some of these things at high rpms going sideways!

Man you are right. My HD video camera has just been gathering dust since I have been working on Speedhunters. I will try to take the vid cam with me next time I go somewhere. The vids won't be anything like Rods though!

JP: That 180sx doesnt only have the G35 back light, has the front as well. It was a pretty hype up car back in TAS 2005/06 and the first one was orange when it came out, maybe you can find more info on top secret website cause they build it.

Nice pics Mike! Lovin the laurel with the wheel drop and scraping the shit outta whatever is at the bottom... just insane

Awesome photos as always from Mike!

Is there any way I can get a wallpaper size of that Laurel?

Great photos Mike. The JZX90 has that look of gangster drift about it. Wouldn't look out of place if it was ferrying a mob boss somewhere, sideways of course.

Thanks for shooting some great photos Mike. You've got tallent there! Were you with the others at the BBQ we made in the car park outside?

These are some of the best drift coverage pictures I have ever seen.