As popular as the D1 Grand Prix is in Japan, almost all D1 events are held at racing circuits located quite far from large urban areas, and given the expense of travel in Japan, it makes it difficult for many fans to attend the events. For a couple years D1 held a round at Odaiba in Tokyo, but the event disappeared after the 2005 season. Earlier this year I got word that D1 would be returning to Odaiba for a special two-day exhibition event known as "D1 Tokyo Drift in Odaiba".  I couldn't wait for this event as I remembered how cool the Odiaba events looked after seeing videos of them in the past.

Like most fans, I came to the event via train. The Yurikamome Line station is located right next to huge parking lot where the event is held, and as soon you step off the train you can smell the burnt rubber in the air! Even people who weren't going to D1 would stare out the window of the train and say things like "mite mite sugoi!" (look, look, that's awesome!).

Located in the middle of Tokyo Bay, Odaiba is a great place for a drift event, and the Tokyo skyline makes an awesome backdrop for some drift action. Some people say that D1 isn't as popular as it used to be, but I find that hard the beleive since both days of Tokyo Drift were virtually sold out in advance. Besides the D1 exhibition matches, there were many other attractions for fans. I will cover those soon, but for this post I will just focus on the first day of D1 competition.

Here's the Team Orange pit early on Saturday morning. All four members of Team Orange were part of the 30-car roster for the event. In the background you can see the famous Fuji TV building, one of Tokyo's most well known landmarks.

Starting at 9:00 am, the morning practice session began. Most of the cars had to run special turn-down exhaust tips in order to limit the noise. I guess that's the sort of thing you have to deal with when holding a drift event in the center of one of the biggest cities in the world. As you can see, the Odaiba event also marked Nobuteru Taniguchi's second appearance following his return to D1. Check out the crazy canards on the rear of his HKS SXE10 Altezza. Nuts.

The Odaiba event also marked the debut of Toshiki Yoshioka's new Lexus SC430. Of course it's not really an SC "430" now that it's sporting turbo four cylinder power.

After morning practice was over, it was time to check out the vendor area. The Weld JZX100 Mark II was featured in the Work Wheels booth. Insane graphics on this car.

Back in the pits, you can see how big Goodyear Japan's D1 venture is getting. Goodyear was fielding five cars in this event, led by Tsuyoshi Tezuka in his Bee*R R32 Skyline.

A quiet moment in the Team Toyo pit area.

After the break, it was time for the real action to start. Keiichi Tsuchiya made quite an entrance spinning donuts behind the wheel of this drop top S13.

All of the entrants gather during the driver introduction ceremony. The Japanese fans absolutely idolize these D1 drivers.

Masyoshi Tokita, the famous boso drifter from Chiba-prefecture relaxes alongside one of Goodyear's umbrella girls. The baseball bat he's holding is his trademark. This year he is driving the new Toyota Crown built by Bee*R (more on that later).

It was then time to begin the qualifying runs determine the Best 16. Here we see veteran drifter Fukuda from Team FLUKE in his yellow 180SX.

Fan favorite Nomuken was laying down good runs all day and qualified in one of the top spots. 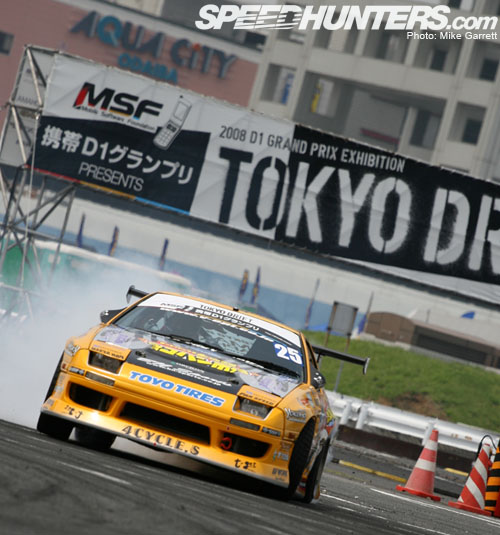 Here we see Drift Samurai in his yellow FC3S RX7. Dori Samu isn't really known as one of D1's top drivers, but he performed very well over the course of the weekend.

Malaysian drifter Tengku Djan also made the trip to Tokyo for the event. He is usually seen behind the wheel of an AE86, but for this event he was using a 180SX borrowed from Quarter Mile R.

With qualifying out of the way, it was time to begin the tsuiso competition. One of the things I really like about D1 in Japan are the driver introductions for the tsuiso runs. The drivers perform small skits or other tomfoolery to get the crowd pumped up. Here we see Nomuken greeting some of his adoring fans.

The tsuiso rounds were filled with tons of excitement and the crowd was going crazy the whole time. Here we see Daigo Saito in his JZX100 Mark II facing Youichi Imamura's new S15. Saito put up a good fight, but it was Imamura who advanced from this battle. 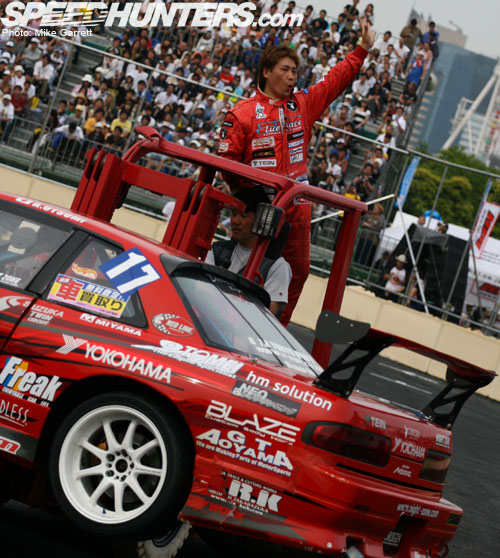 During the best 16 battle between Tsuyoshi Tezuka and Akinori Utsumi, Tezuka got a little too close and accidentally forced Utsumi to crash into the wall. Though he advanced because Tezuka's mistake, the front of Utsumi's S13 One-via was in bad condition. He returned to the pits with his car on a forklift, but was in high spirits the whole time. He vowed to fix the car before the best 8 started.

Amazingly, Utsumi's crew repaired the car well enough to drive in the best 8 against Kawabata's 180SX. You can see the cars hastily repaired battle damage in this photo. The crowd was cheering him on the whole way. Unfortunately for Utsumi, his alignment was too far gone to put up a good fight against Kawabata and his run ended at the best 8. He still exited as a hero to much applause.

In the semi-final against Masao Suenaga's FD, Kawabata had too much angle in the entrance to the first corner and clipped a guard rail that was part of a permanent light pole. It was a pretty scary crash given the speed at which he hit, but luckily Kawabata was fine. The crash literally destroyed his front bumper and intercooler, ending his day. His Toyo teammate Suenaga would advance to the final.

In the other semi-final match, it was an amazing fight between Youichi Imamura and Nobushige Kumakubo. It took a few rounds of sudden death to determine a winner. It was the tsuiso king Kumakubo who finally advanced to the final against Suenaga.

Masao Suenaga (brother of Speedhunter and D1 driver Naoto) was driving his newly rebuilt RE Amemiya FD RX7. The car is now sporting Amemiya's famous Porsche front end conversion. Here we see him and Kumakubo building speed as they approach the first corner.

Like his battle with Imamura, Kumakubo's battle with Suenaga could not be decided with just one match. As the crowd shouted "mo ippon!, mo ippon!", (one more time! one more time!), they fought through multiple rounds of sudden death before a winner was determined.

In the end, it was Kumakubo who finally took the advantage and won the event. An amazing feat considering how worn out he must have been from competing in the EDC round on the other side of the world less than a week before! Although this exhibition event did not affect the D1 standings, Kumakubo still scored a fat check for about $20,000 USD! I wonder what he will do with all that cash?

During the victory celebration, all the drivers came back and out and the crowd went crazy. They did not want to leave. The drivers were really enjoying themselves as they through souvenirs into the stands and ran around giving high fives to fans. I think some of these drivers could be baseball pitchers seeing how far they were able to throw gifts into the stands!

After all this excitement, the weekend was only halfway done. Everything would start again for Sunday's match, which would be just as crazy as Saturday's. Look for Sunday's coverage very soon. 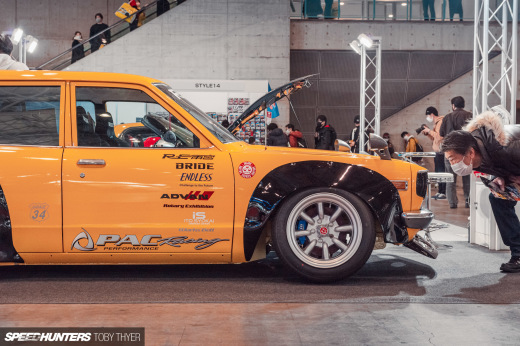 Really nice, I noticed that the canards on Nob's car weren't there on all the pictures. did they add them during the day?

awesome, awesome, taniguchis car is like one of the DTM cars with those canards

Check out europes version of tokyo drift but at a more famous venue......

Great coverage Mike! I love the photos of Team Orange, and Yoshioka's Soarer!!! That yellow S13 convertible just got back from Greece, it belongs to Kumakubo! I rode with him in that car at Ebisu's touge!

I'm so glad Matsuoka san finally painted Yoshioka's Lex. That thing didn't look good at all when it was black.

Tokita is from an old school drift team called Canopus! He is an old friend of my boy Mitsuteru Igusa from Team Orange (the funny fat guy who serves as their crew chief).

Wish I could have been there, but I was in LA taking pics of girls and S2000s. Sigh, would have rather been at Odaiba.

any more coverage on the panda trueno? please?

Thank you so much for this. I miss my option DVD's

i much more prefer articles, that are long like yours. The updates with just one picture and a paragraph are a waste time.

keep up the good work!

Antonio, Yoshioka's SC looks so cool now. It still needs some dialing in though. It looked like he was having trouble getting much angle out of it.

Jeroen, actually I didn't even notice the canards were gone in some photos. Good eye! Man that HKS team is hardcore. They had like six spare differentials sitting in their pit!

Yiso, the stuff with the panda 86 is coming very soon!

Matt, thanks a lot I'm glad you like it. For our original event coverage (the stuff we actually go and shoot ourselves) we will be running more detailed stories (or a series of them) like this.

I always liked Kawabata, not that the other drivers aren't good or anything, but he seems so relaxed and collected....a very humble man.....a true under-dog !

Not to mentioned the crazy crashes....like the one he got into last year at Suzuka......

What kind of wheels are on the Weld JZX100? They kinda look like Volk GT-F's but I know that isn't right...

awesome pictures as always, and an awesome write up!