SHARE Uniting Nations: The 1930 Ford With A V12 German Heart

When you picture a hot rod in its natural habitat, you wouldn’t place it on a mountain pass over the Italian Alps, would you? But that’s exactly what Roger Stegall – a retired US military officer now residing in Germany – decided to do. In fact, he didn’t just go over the iconic European mountain range; he ended up all the way in Venice, Italy for the annual Roll & Flat Beach Race. What kind of madman embarks on such a trip in a 1930 Ford Model A…?

Although it resembles a classic hot rod, I think of Roger’s Ford as more of a grand tourer. It’s comfortable to ride in, reliable, fast, and he regularly travels all over Western and Central Europe in it. If that’s not representative of a ‘GT’, I don’t know what is.

So what makes this build so different? It’s a combination of things, some expected and others not so much. In typical hot rod fashion the body has received a chop and channel, while the chassis is now 15-inches longer than that of the original ’30 Model A. The engine, however, is a real anomaly: a BMW V12 from a 1992 750i that’s been reverse-engineered with carburation.

As soon as Roger arrived at the beach in a convoy with his friends, we made our way to a quiet area near the shoreline where I had the opportunity to check out his custom work up close.

Neatly handwritten on the side of a valve cover is the note: “Hope this shit works 15 AUG 2009.” Given we’re now in 2020, it’s safe to assume that the unique engine setup works pretty damn well, and Roger did mention that he’s had no mechanical issues whatsoever in the last 10 years.

The M70 V12 is a 5.0-liter unit, but since it’s sitting in a hot rod chassis I’m itching to call it a 305ci motor. In keeping with the build’s old school nature, electronic fuel injection was never going to cut it, so Roger ditched the BMW setup for four Rochester 2G carburetors. And get this… the intake manifold was fashioned from an old school commercial hamburger press.

In completing the retro conversion, the engine’s electronic ignition was also removed. In its place, Chevy HEI distributors were chopped and connected directly to the overhead cams. Roger says the hardest job was setting up the timing for each cylinder bank and then synchronizing them.

To finish off the engine bay, he took the original Model A oil filter, shaved-off all the tabs, and polished it up.

The exhaust marries traditional lake-style headers with a full system, QTP electric valves allowing for switching between ‘annoying the neighbors’ and ‘quiet’ modes. When the valves are closed, exhaust gasses exit out the back through a couple of Walker Quiet-Flow 3 mufflers.

Meanwhile, the transmission tunnel was constructed from a Weber barbecue grill (yes, really), and this is where the 4-speed E32 BMW automatic transmission sits. Roger’s added a Compushift controller, making it possible to shift manually when the opportunity knocks. Steptronic in a hot rod – that’s something!

Out back you’ll find a positraction-equipped Ford Explorer rear end, because as Roger says: “there’s nothing stupider than doing a burnout with one wheel spinning”. The axles turn 16-inch spoke wheels from Wheels Vintiques, wrapped up in meaty 70-aspect tires.

The Model A was originally imported from Wisconsin as an all-original runner, with most of the parts sold to another restorer. I mentioned the chop (3.5-inch) and channel (7-inch) that Roger completed, but the visor was also extended to fit a sunroof motor. The sunroof itself came from the 750i that donated its running gear for the cause.

The extended body shape is finished off with a pair of ’34 Ford bucket headlights sitting in between the original refurbished grill.

The interior is a thing of beauty, but also surprisingly modern and comfortable. The bench seat hides a 27-gallon fuel tank behind the reclining upper section, and there’s a little baggage space under it as well. Why such a big fuel tank? Well, that’s how much space was available – even with Roger being 6’3 – so it was all used.

The restored dashboard originally came from 1948 Buick Special found in a Florida junkyard. Roger even went as far as to gut the original gauges and put modern mechanisms behind the vintage faces.

There’s Mac Audio speakers in the doors and roof, Vintage AC air-conditioning, and a Summit Racing 11-inch steering wheel connected to a hydraulic steering rack from an old BMW 5 Series. To finish it off, Roger added a line lock, for a comfy, carefree burnout.

If this build lived in the United States, it would surely be an exotic setup with all the German engineering involved, but when you live in Germany and there’s an abundance of old school BMWs, it makes perfect sense.

Roger hasn’t stopped at this project though. He’s currently working on a ’55 Chevy Nomad and a wide-body Porsche 914 with an LS-swap, even though he already has another 914 with a Nissan V6.

As soon as I can start travelling again, I definitely need to visit Roger and check out his workshop to see these creations for myself. If they’re half as cool as this one, we’re going to be in for a treat. 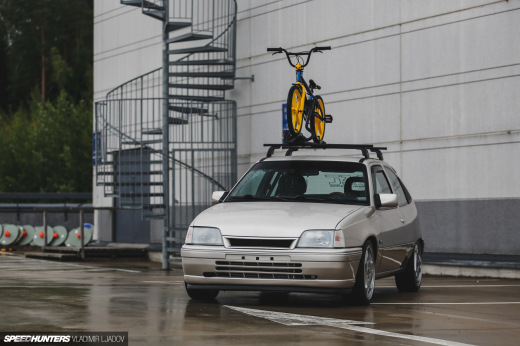 Back To The ’90s In A Fully Rebuilt Opel Kadett

Experiencing this machine on site after your shooting and actually being invited to take a seat was mind blowing. Roger is a really nice and welcoming guy, who never gets tired of answering the same questions again and again.

His creation isn't only beautiful. What I love most is the long-distance driveability, the fact that it's road legal and that he built it himself, with the help of friends. Perseverence made his dream become a reality. Well done!

Great written article and pictures, Vladimir. It was well worth the looooong wait. Hope the pandemic will end soon and the event will take place again in October.

Got to love this car for being different!

What an amazing machine! IMHO this is as pure a hotrod as you could imagine: a vintage chassis with modern parts that may seem crazy but make perfect sense to the builder more than anything. I'd love to know how Roger gets away with running open wheels: they're frowned on by the law in most European countries.

Awesome !! Aesthetically it all works, comfort and beauty coming together for a rolling piece of art.

When the true spirit meets a creative mind...

I need to meet the TÜV guy who put his name under the documents :-0

my question is: how he got this thing TUV compliant?

This thing 90 years old. A car in germany has to be compliant to the StVO of its time. You're basically allowed to do everything to such an old car as long as it doesn't fall apart. And note the missing H-Kennzeichen, no historic car here so he doesn't have to follow any rules on what is allowed.

The reliability should be about the same...

Does it come with an operating manual?
And what language is used?