The Japanese are really good at coming up with interesting plays on words, and combining words to make shorter, easier to use terms. The one I like to use as an example is ‘Speedhunters’, which most Japanese readers refer to as Supi-han, written in Japanese as スピハン.

It’s the same with numbers. For example, 23 is ‘Nissan’ (separately, 2 is ni and 3 is san). Many links are pulled from numbers, dates included, which is why this week was a special one. The 2nd of March (3/2) is a celebration day for the R32 Skyline; 3/3 celebrates the R33 and so on… I normally head out with Project GT-R for R34 day (3/4) but as the weather forecast wasn’t looking good for Wednesday night, I decided to hit up the 33 meet the night before.

Despite the coronavirus situation, and the fact that there’s a quarantined ship docked 500m from Daikoku PA, it didn’t seem to impact the turn out.

These themed nights are a really great way to see how things are evolving with regards to certain makes, models or styles. These days, many GT-R owners take a more conservative approach to tuning, while GT and GT-S models usually fall into the hands of the younger enthusiasts who aren’t afraid to play around more.

Of course, March 3rd isn’t solely reserved for the Skyline. We can’t forget the C33 Laurel, another RB-powered Nissan that still has a big following.

There were quite a few Laurels present, and it’s easy to understand why they’re still loved. While the Skyline was sports-oriented, the Laurel was not. But then people figured out that the unassuming RWD four-door sedans made a great base for drifting, and the rest is history.

Of course, you are free to celebrate the love for your own car any time you like, and at Daikoku PA on Tuesday night there were a number of interesting cars out and about, including a pair of R30 Skylines.

There is something so special about the boxy, and unmistakably ’80s shape of this Skyline model, and if you ask me, they look better now than they ever have. Especially when dropped on some period-correct Hoshino Racing wheels.

But back to the various R33s that had shown up…

With the way Nissan ended up splitting the GT-R brand from the Skyline model, there’s been some disconnect between the two namesakes. In fact, many of the younger generation do not properly understand that, historically, the Skyline and GT-R have gone hand in hand. When I saw a bunch of four-door R33s it reminded me of the new 400R, and how it could be looked at as the spiritual successor to the R33 GTS and even the ultra-rare Autech GT-R sedan.

Of course, there were also a few R32s present.

As I continued my walk through the lot, more cool cars kept popping up, making it a tad challenging sticking to the R33 theme. But how can you not take notice of a pair of AE111s sitting so pretty. Check out the overfender kit.

As the performance models in the FWD Corolla Levin/Sprinter Trueno AE111 range were powered by the 20-valve version of the 4A-G, many examples have given up their engines for AE86 conversions. It’s probably why you see less and less of them around these days.

This SW20 was (I think) part of the same Toyota group.

On the back window was a really funny take on the Speedhunters banner. Speeddasenais can be simply interpreted as ‘not fast’, the owner perhaps making a comparison to the usual tuned machinery you see on Japanese highways.

You never leave Daikoku disappointed, nor unsurprised. This is a curious take on a Laurel.

For me, the simpler the approach the better.

And this slammed C33 was by far my favorite of the night.

I loved the stance on Hayashi Racing wheels, but perhaps a tad less negative camber might be better for usability. But then again, if you’re out to shock and make your mark (literally in this case as your subframes scrape on the asphalt), this is the look to go for.

Impreza wagon? Yes please. I really like these things, and it would actually be a ton of fun to run one as a daily.

A couple of Toyota JZXs stopped by at one point too, but didn’t stay long. With coronavirus keeping the docks deserted at night, the street drifting scene has fired up again.

I only ended up staying a couple of hours, but during that time I checked out a lot of cars, chatted to many familiar faces, and took in a feeling of the good old days, that for the time being is still very much present in Japan. 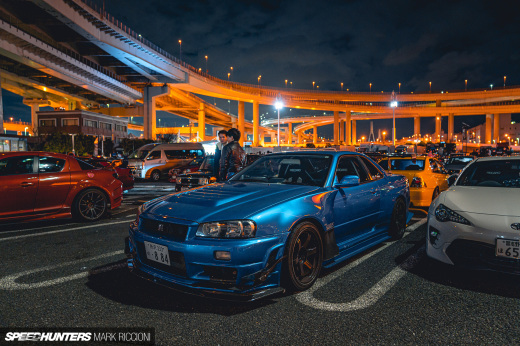 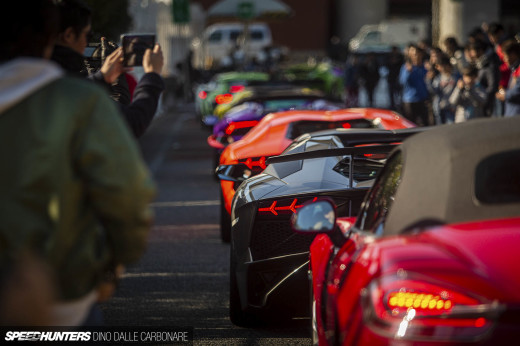 Period correct to match his R30?

Some very cool old school rides. And great reason to get them out.

Always love your coverage of the R days and Mazda days over there.
I think the boxy, svelte design language of the 80s/early 90s cars matches perfectly with the current obsession with flat, clean lines (see the new bmw logo). The Honda E comes to mind. Simple design and minimalism will never go out of fashion, even though it seems like it did for about a decade lol.

Yeah that BMW logo confuses me. Why change it but then not apply it to cars?

Agreed. Simplicity and minimalism are where you get the real beauty, imo.

Thanks for always supporting the 33's, Dino!

Bad weather so you didnt drive the R? Coming from someone who advocates driving cars? Am i missing something? Are you garage queening the R?

Who are you? The one who owns dino R's? Or the one bought him the car?

The car has no shaken. It's sitting awaiting parts and time, which I have very little of these days. But thanks for thinking of it...

About the R33, I remember a few months ago an ultra rare Blu LeMans crashed near my house in France, I was the first who rescued the driver.
The car is now a...sausage

It was a bit weird that night with the CORONAVIRUS Cruise ship docked so close, somewhat eerie LOL. Mr Speedhunter never disappoints, DAIKO always has some nice rides turning up. Ive also noticed these last 2 years that Skyline GTRs are disappearing, theres not as many on the road as there used to be.

Yeah that ship freaked me out too!

Either the Americans are taking them, or the Japanese are hiding them from us before we get the chance, haha

Man I absolutely love those AE111's! They are very good cars, but sadly most have become donor cars. It's great to see some people appreciating them.

"With coronavirus keeping the docks deserted at night, the street drifting scene has fired up again." Well, I'm glad one good thing has come out of that then.

Congrats Dino, for sure one of the best shot is the "White Nissans"! R33 is my favourite GTR.