The Acura Grand Prix of Long Beach is simply a great place to take photos.

Camera or not, from the five support races to the open paddocks to the main IndyCar event, there’s just so much to take in each day. Based on the amount of professional-grade equipment I saw being used in the stands — not to mention trackside as well, of course — I’m certainly not the only one who feels this way. However, since Sara and I were only in town for Friday’s practice on our way back north from San Diego, I couldn’t quite justify getting full media access for myself.

Instead — as I alluded to in my coverage of the Historic IMA GTO class — I opted to take some photos from the stands and put together a series of short stories detailing what you can capture with a run-of-the-mill general admission ticket.

Of course, everyone shooting wants and expects to go home with photos of race cars doing race car things. This is all well and good — and I’ll definitely cover some of the locations on track that I used as well as a detailed look at camera settings in part two of this series — but I wanted to focus on a different topic for this story.

It’s small, but important, and something that I need to do a lot more of myself.

Simply put, there’s so much more color that can be added to an article simply by wandering around the paddock and seeing what else is going on. Spending time at the booths, watching the fans, and searching for the obscure build that showed up tells so much more of a story than a hundred similar shots of race cars ever will.

If you’re just shooting from one spot in the stands (or the same photo window as all of the other photographers all day) you’re naturally going to end up with more or less the same shots as everyone else. More often than not, I forget to tear myself away from the action to check out what else is going on around the paddock, which is also the perfect opportunity to shoot the action itself from different angles.

At any race event your legs are your best friend; move around and see what’s out there. It’s always worth exploring all of the nooks and crannies at an event.  Also — unofficially — if it isn’t the main race day the guards and teams watching various areas often won’t be bothered to give you the boot if your ticket doesn’t allow you access to a certain area.

So long as you do have a ticket and you’re quick and courteous, you often won’t have a problem getting a couple snaps in an area that might technically be reserved for so-called higher level tickets. Just ask, be friendly, and don’t take it personally if you’re turned away.

You’ll always go home with a diverse pool of images this way, and you might even capture a shot that no one else saw. This is a headspace I need to get myself into more often rather than obsessing over getting the most technically-correct images from the side of the track.

When it comes to race day, at an event like the Long Beach Grand Prix you still get great access to the cars without any sort of special ticket.

Another thing I need to learn to be better at is setting the scene. A basic image of an IndyCar barrelling away with a tight crop from a telephoto lens might be cool, but it doesn’t really tell the whole story when it comes to the Long Beach Grand Prix.

I could easily be argued that I had a better time shooting the event from behind the fences than I have been in front of them, and I ended up surprised by how many shots I was able to come away with. Sometimes we just need to be forced outside the box a bit.

When it comes to photography, regardless of whether you’re a long-time camera nerd or just recently bought a random camera to capture your day at the races, the streets of Long Beach are a treasure trove of opportunity.

I can’t stress enough how important your thought process is when it comes to taking an image, but I’ll be back soon to share the more technical aspects. 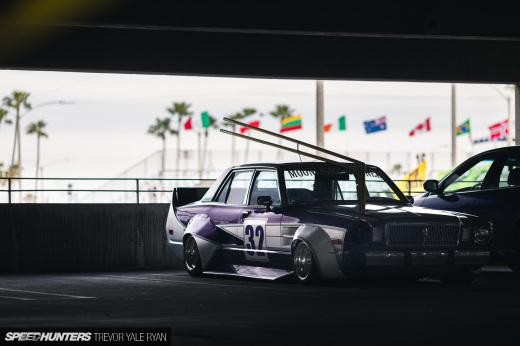 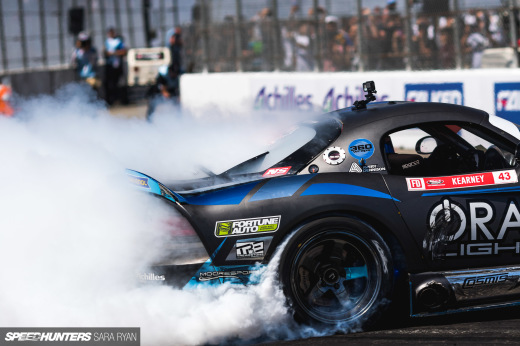 The photo of the number 75 Nissan Z32 is epic. The one right after of the new NSX is also fantastic. Thanks!

Thanks, yeah I love the vintage stuff especially!

Agreed...the #75 Cunningham Z32 was a great race car during it's time, and the menacing looks Nissan coaxed from an already amazing design with this car is iconic. SO AWESOME that someone keeps it going even today!

Agreed, that's why the first story I did was dedicated to that class. Always my favorite.

Thanks! But are you from Need For Speed?

I fall into the same trap of getting the same shots of different cars. I always go in with the goal of taking photos under the mindset of, "is this shot magazine worthy?" (not that I post them anywhere but forums), but I always leave with the same tired angles because I do like to get as much of the car into a shot as possible to capture the big picture. Looking through SH articles, I often wish you guys captured more than some small angle of certain cars, but at the same time, that detail shot does make for a 'higher quality' photo, and I have to remember that this site is partly about enthusiasm for photography itself as an art. I learn a lot from these kinds of articles, though, so keep them coming!

Yeah, I think the main issue is that too many magazines just turn and burn the same sort of thing over and over. It doesn't feel like there's a lot of thought going into it, just a formula that's been followed for decades.

If Speedhunters was just 3/4 angle of every car I would have stopped reading a long time ago, but it is definitely nice to see the whole picture along with the details. This is what drew me to 000 Magazine if you saw my post about them, their work has been a big inspiration to me.

Another part of the problem in regards to your detail comment is that at car shows and similar you can't really chose your backdrop, so a wide angle generally isn't too aesthetically pleasing, at least not for every car.

Anyway, thanks for the feedback and glad you enjoyed this, I have a couple more coming from Long Beach.

Amazing Article, I think this kind of speed Bank and SSC Aspirants should also maintain to gain to score high.