Welcome to the epitome of Japanese underground car culture. Kaido racers, dekotora, bosozoku and their bikes, and the king pimp daddy of them all Morohoshi and his flashy Lamborghini Aventador.

This may all look and sound like something out of a movie set, and that’s because it is.

I was typing away in my office yesterday, catching up on a whole lot of Speedhunting, when the phone rang. I knew who it was straight away as I’ve set a specific ringtone to his name. It’s a melody you may have heard of before, popularized by a movie trilogy about an Italian-American family that was good at making people sleep with the fishes.

The conversation was short and went something like this: ‘I’m shooting a scene for a film I’m doing, you should come down and check it out. There will be lots of bosozoku, a dekotora and a couple of kaido racers; you know, the ones with the big splitters and long exhausts.’

Right away it sounded like something I’d want to check out. If I can grab a few pictures to document a car culture experience I’m all for it, even if that means spending a few late-night hours in one of the shadiest areas of Yokohama.

My response was as equally short and to the point. 了解! (Ryoukai!), a translation of ‘Roger that,’ is a fast and easy way to confirm your understanding and enthusiasm for something.

Fast forward a few hours and I found myself in a very dark container yard somewhere around the Port of Yokohama, surrounded by a storm of very loud motorcycles.

Ever since we decided to start covering bike culture on Speedhunters, I’ve been wanting to dedicate some space to what the bosozoku do with their machines. So while the director and his assistants were busy arranging vehicles for this particular shot, I had a few minutes to wander around and snap away.

This was all very alien to me. Sure, I’ve seen bosozoku bikes at Daikoku PA and various kyusha meets, but I never really took the time to look over them properly and take detailed pictures. It was partly due to fear – the bosozoku have an outlaw reputation after all – and partly because I was always more preoccupied with cars.

But last night was different. Not only was I able to get close and begin to comprehend this unique bike culture, I also got to meet and chat with the owners who turned out to be some of the friendliest and most easy-going people I’ve come across in Japan.

There wasn’t much time, but I still managed to get lost in the details.

There’s no doubt that these two-wheeled creations look so much better at night; they have a very special kind of presence and each one is unique.

By definition, the bosozoku are ‘running tribes;’ they each belong to a specific club and there are a few clubs in every prefecture throughout Japan. They’re all about creating a sense of belonging and team spirit, something that harks back to turf wars between bosozoku factions.

I’m not too sure if there are many territorial clashes going on like I’m told there were in the ’70s and ’80s, but that’s something for another time as I dig deeper into this underground culture.

Last night, there was nothing for me to be concerned about though; everyone was out for a bit of fun and to be part of the film.

One question I did ask, is if there are any specific things they do to their engines, and the replies were unanimous. It’s all about making the biggest racket possible, so you won’t find any exhaust silencing whatsoever. Once you nail that it’s about the throttle work, practicing to make your engine sing or ‘talk’ as you rev it with a specific rhythm.

Having a matching custom half helmet (read: brain bucket) is very important too, as is suitable attire.

Then there are the saddles and custom backrests. Most bosozoku like to ride with a passenger, so having a provision for them to lean back and wave their hands around is important.

The Honda CB400T Hawk II is a popular base for these builds, but my favorite bike of the night was this Kawasaki triple, a three-cylinder two-stroke that threw out a very distinct buzzing sound over all the other four-strokes. It even had an airhorn playing The Godfather theme, just like what my phone does when Morohoshi calls.

The dekotora that illuminated the immediate area with its glow only added to the impossibly Japanese atmosphere of the night.

You may remember seeing this white Lamborghini Huracán from when I met up with Morohoshi and his family the other month.

Oh, and let’s not forget the kaido racers that were invited along.

The shoot got underway pretty quickly, which meant my time checking over the bikes had come to an end.

However, I did stick around to see what these guys were up to.

It was basically a take of Morohoshi pulling up to meet his friend before everyone went out and joined him on a drive across Tokyo Bay.

This is all coinciding with the opening of Morohoshi’s new Fighting Star shop, which is moving from Nihonbashi into a much bigger venue in Odaiba early next month.

It wasn’t long before the director called for everyone to start heading out, and that was pretty much my cue to call it night.

There is more filming happening tomorrow on a yacht, something to do with dangerous members of the Yakuza and the handing over of massive sums of cash. I’m told it’s all make-believe, but still…

It’ll be interesting to see the finished film, but for me personally this was a great introduction to the world of the bosozoku. 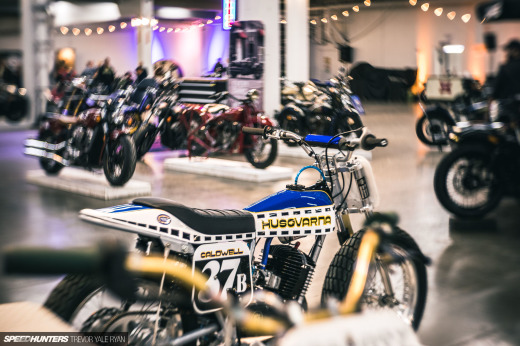 whats the name of the film?

I'll let you know once they are done

I am of the opinion that we really shouldn't glorify a violent, crime-ridden subset population that feeds on weak and meek, but whatever man.

Pretty sure it's not about the gangs but about the vehicles. Don't let that self-righteousness get in the way of an interesting article

You mean like the news and entertainment industry do?

maate do you seriously think people still go out and beat each other up over territory? in 2018? in J A P A N?

It's more of a glorification of what it once used to be, it's become more of a style than anything.

I get the distinct impression that bosozoku these days are far more "adult motorcycle club" than "violent gang."

Much like the Harley groups here in America.. but with more style

Welp, that kills all the news coverage of American politicians.

These cars ALWAYS get a smile from me, SO over the top and crazy...but awesome in their own way. Reminds me of the Chuck Barris cars back when I was a kid, these are the Japanese version!

Are you referring to George Barris? Chuck Barris was a game show host.

Aw crap...George Barris for sure, my bad.

Its nothing glorious when they are riding through your neighborhood revving their engines at 2:00 a.m. when you have to go to work the next day. Don't promote this

Happens everywhere, I hear them all the time across the river in Kanagawa.

except we dealt our own street justice. Cinder blocks, bats and running them down with our cars. We ask them simply take their identification. Then tell them this is our neighborhood. Come back again and we will visit your house and destroy their bikes so they have to push it home

There’s a fantastic documentary covering some bosozoku history by Vice International on YouTube.

Thanks for the explaination man

so weird! I love it

Almost all of Japan's underground sub-culture together in one place. What's not to love?

Bit of an overload really haha

The detail of the helmets. Is something I had not noticed before....dig with your hands Dino-San. Gently enter in. Tie a rope around your waist

Why is Morohoshi Aventador right headlight off?

He can control them, was probably going thrown a flashy flashy sequence lol

That gold and purple Suzuki is a bike feature material.