While Subaru continues to produce cars and plan for the future of the Impreza and all its variants, Mitsubishi has done the opposite by ditching the Lancer Evolution in an attempt to save itself from complete failure. Granted, priorities are priorities, but getting rid of arguably the most recognized model in your line-up doesn’t really seem like a great idea to me. Thankfully, Mitsubishi still has the Pajero. For now at least, anyway.

But let’s get back to the point of all of this. I wanted to show you just how brutally relevant Evolutions still are, and I didn’t even need to pick an Evo X for it; rather an Evo VIII RS built by Unlimited Works.

While I love Skyline GT-Rs, I will always be of the opinion that nothing will keep up with a nicely modded Lancer on a mountain road. And while this customer car is predominately set up as a fast street/track machine, I’m sure it would be like a scalpel around a touge.

With over 260,000 km on the odometer this is one Evo that’s been throughly used over the past decade and a half, but you wouldn’t know it from looking at it. I was initially drawn to the car for its super-clean exterior look, something that its Voltex wide-body kit and carbon fiber splitter/canard arrangement has a lot to be thanked for. Lightweight, forged RAYS Volk Racing CE28N SLs feature at four corners, with Brembo’s latest 6-pot and 4-pot brake calipers hiding behind their spokes.

There’s plenty of substance to back up the looks thanks to a rebuilt 4G63 peppered with Tomei Powered parts, including a 2.2L stroker kit.

The secret to the engine’s extra performance comes from what’s tucked deep in front of the engine alongside a TiAL external wastegate sprouting off a Full-Race tubular manifold.

The BorgWarner EFR turbocharger allows the whole ensemble to pump out 600 horses.

That sort of power is something I can’t even imagine; the most powerful Evo I’ve been in probably had 500hp and that was quick. So 600-odd, delivered through one of the best full-time AWD systems out there has got to be a rush.

It also shows how the drive to test and use foreign components is allowing for more exciting setups, steering away from the safe, proven and tested turbo kits that for decades we’ve seen used on engines like the 4G63 in Japan.

While there are far more powerful Evos around the world, the approach here was to create a responsive and well balanced car, and I think it’s safe to say that’s been achieved. For the Japanese it’s not all about straight-line speed. 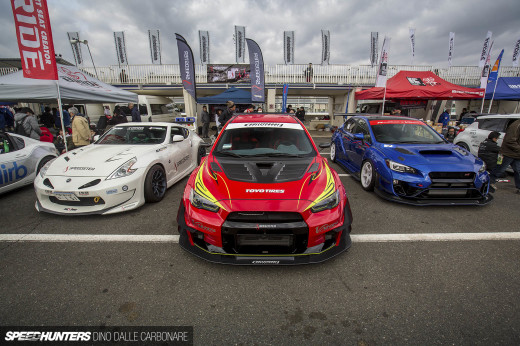 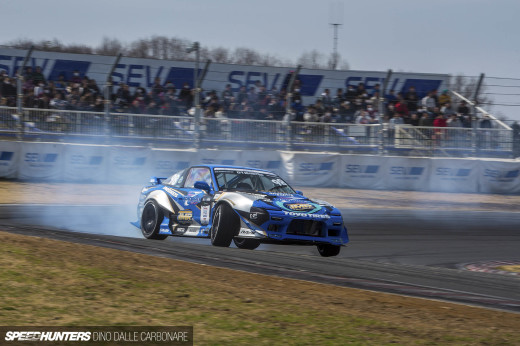 Could This Be The Perfect SR20 Setup?

That EVO sure seems finely-tuned!

Bet it's a monster on the Touge

"While I love Skyline GT-Rs, I will always be of the opinion that nothing will keep up with a nicely modded Lancer on a mountain road"

I never knew you were part of team Emperor, Dino.

Although I love the evo, Hot Version has proven many times that there are quite a few vehicles that are faster on the touge than a well sorted evo.

Eh, that's a very broad statement. The most important thing on any car is weight and on a mountain road or hill climb stage that becomes even more important.

Well said but it is highly unlikely that you will find lots of souls willing to die to win a touge battle, so for us mere mortals the Evo with its superb grip seems like a nice compromise between enjoying a touge battle and dying. And weight is a matter of how much effort you put in the car; decent weight savings can be had in the Evo with proper expenditure of cash and effort!!

There are some feather weights out there these days that make even a gutted EVO look like a porker lol. it's crazy how light some stuff is now.

In retrospect I should have probably pointed at how forgiving it is. Sure a 600 kg formula car with 800 hp will be faster on a hill climb race. Find me a driver that can extract 100% of its potential.

For sure...have you heard about Lionel Regal? The guy was a hill climb legend in F3000 cars and went head on into a tree on a run. Those guys are mental.

EVOs are great cars though and very hard to beat if you can drive your ass off in one thats setup right. I got the point you were making! Sick car Dinosaur.

Comparing an Evo to an F3000 car makes sense for so many reasons.

I find the Evo slow when compared to the Space Shuttle too. Boring even.

Spencer...please be quiet when adults are talking. Thank you. -Management-

Just so happens I'm working on one

Sure the car is funny and wild at the same time and the owner is having a smile reaching his ears whenever he drives it. The quality of performance and looks of this car and knowing that it's near 300K on the odometer, sure this guy is looking for every single detail and planning for frequent maintenance schedule. I love the: "be ready so nothing can breaks and spoil the fun while on the road".

A couple of years and the Evos will become collectors garage queens while Subaru will continue the production i think that will never happen to the Imprezas (unless for the guys searching for McRae car).

The "JDMy0" bug has already spread to Evos. Try looking up prices for the TMEs.

I think it might. I certainly don't see many new wrx and stis anymore. I can still hear the older ones driving by though lol.

Totally dig it. The Lancer is so unassuming in stock trim. That's part of why the success of the EVo is so cool to me. We need something like the Lancer/Evo again. I need something new to look forward to lol.

The fastest and most interesting thing they're producing and can take you from point A to B are elevators.

Mitsubishi thinks the new Eclipse is that car hahaha

"Mitsubishi HOPES that other people THINK that the new Eclipse is that car." And "hahaha" doesn't quite sum up the level of brand destroying ridicule that they're going to generate from such an awful assumption being made. Poor Mitsubishi... they had such an accurate read on the pulse of the OEM performance tuning market for such a long time, only to flush ALL of it directly down the drain in hopes to capitalize on the razor thin profits that can be potentially generated when going ALL IN on the compact crossover market. We lost them... hopefully not for good though.

"While Subaru continues to produce cars and plan for the future of the Impreza and all its variants, Mitsubishi has done the opposite by ditching the Lancer Evolution in an attempt to save itself from complete failure."

The single reason why Mitsubishi nearly went bust, was due to poor management decisions. Like, seriously, turning almost all their cars into hybrids when the world barely needs them? What were they thinking?

They are still at it...Let's hope Nissan turns them around

Good points about 500 and 600hp EVOs. Easy to get caught up in numbers and forget how substantial those power levels are!

evos are beautiful in everyway and always will they will always have a fan base in my opinion. i love the white and the high horsepower with AWD equals a all out monster this thing is probably awesome in action

This evo has nothing to do with mt roads and against the king of all road cars, the Mines R34 - it wouldn't probably blow up.

"With over 260,000 km on the odometer this is one Evo that’s been throughly used over the past decade and a half..."

Absolutely. These cars are not the sit-still-and-look-pretty type. They demand to be driven.

I recall a Mr. Clarkson taking an Evo VIII FQ400 against a touring car racer, in a Lambo Murcielago, and badgering him until he spun the mighty Italian. (S5E7)

He said, and I quote:
"This is amazing! A fit young racing driver in a supercar and he cannot pull away from a fat man in a four door saloon."

That was with FOUR hundred horsepower... this example has north of SIX.

You're looking at the automotive equivalent of an IED, wired to a howitzer ammunition depot.

Now that aero bits are becoming standard, why not standardize our vernacular with respect to the bits? To communicate with seasoned race people, study http://www.mulsannescorner.com/ The site is by a guy who made wind tunnel models for top race teams. Those things you call canards are most commonly called dive planes, and their main function is to generate vortices. Technically they are vortex generators, but in the race car world they are called dive planes, not canards. The front wing on an F1 car could be called a canard, but it is simply called a front wing. A spoiler is not a wing. It is a lip at the rear of a car to deflect air sharply. It can provide downforce, but is very inefficient compared to a wing when it come to lift/drag ratio (except with some low-lift comparisons). A wing will have air passing on both the upper and lower surfaces, has significant thickness, a fairly soft radius on the leading edge and a fairly sharp trailing edge. When speaking English to people that have been around the sport for a long time, using accepted terminology keeps them focused on the subject. Using colloquial or inaccurate terminology is distracting at best. The passion that you write with and the fine photography deserve technical writing on the same level. Love the car, btw!