I’ve made no secret of my love for the blue oval over the years, particularly those cars of a certain vintage.

As the years pass though, their numbers dwindle and fewer are used as intended. We haven’t quite reached critical point just yet, but it does make me appreciate those who continue to use their cars just how they should be used. Back at Players Classic in June, there were quite a few classic Fords on display that were double-jobbing as show cars one moment, before tearing up the famous circuit the next.

This is one of them.

Being Irish, I’m used to a very specific style of MkII Escort; that is fully-built rally cars. There’s nothing wrong with them at all, but it does mean that when I see a track orientated build, I get that little bit more excited. The grass being greener and all that.

This particular MkII is running a slightly more contemporary powerplant, and probably one of few engines you can swap into a classic Ford without being hung, drawn and quartered. The 2.0-litre DOHC 16-valve turbocharged Cosworth YB, better known for its role in the production Sierra and Escort RS Cosworths, is an ageing engine, but it’s still held up on a pedestal by Ford fanatics. This one has over 500hp on tap, so there’s no arguing with its potency.

Inside is your typical stripped interior that we associate with track cars. The difference here though, is that gear shifter isn’t quite from the Ford family, is it? No, this Escort is running a BMW E36 M3 Evolution gearbox and differential to cope with the significant increase in power and which explains why the car topped out at 209mph on the rolling road.

Where there’s a Ford, there’s often a set of Compomotives nearby. This is no different, with the 16-inch wheels wrapped in Toyo R888s.

The rear cooler is an interesting one, used as part of a water cooling system for the hybrid Garret T4 turbocharger.

It’s a simple idea that’s been well executed, which is something I find myself writing a lot when it comes to the classic Ford scene. I just hope that for many decades to come, people will still do what it takes to use their Escorts as they were intended. 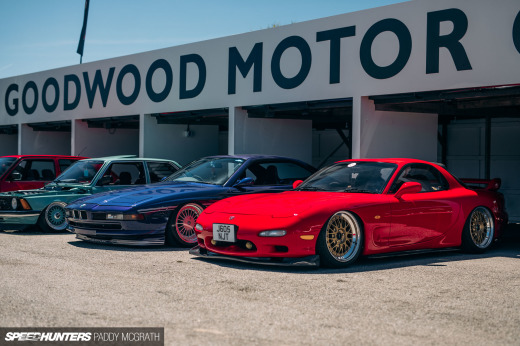 Players Classic: The Evolution Of The Perfect Car Show

"without being hung, drawn and quartered"
i'd rather say hanged, hung has a different meaning

there can't be a gearhead out there that wont smile seeing this potent little beast. 500hp sounds just so much more insane once you remember this car doesn't really weigh anything.

Now this is how fender flares look good.

Would love to see/hear this driven in anger in a Euro hill climb event. It would be right at home.

Hey guys, what happened to the huge photos you used to post?

What do you mean?

My Uncle Hudson got a year old Kia by working parttime off of a pc. This Sitesee it here===== max34.comllllllll

arslangolic We used to be able to read the paragraphs in presentation mode. I miss that. Not a huge fan of scrolling

arslangolic There used to be near 2k photos posted on the site. But the largest I've seen over the past couple weeks has been 1200x800

EdwardKA You have to click the picture. Once the picture shows up, there should be a menu bar on the bottom. Select the download icon to get the 1920 x 1080 resolution picture

difflocked_mees There is also that, you forget that these are often comfortably sub-1000kgs.

jbfromsiliconvalley It sounded great on track, the YB does make a distinctive sound too.

EdwardKA arslangolic Everything is still being uploaded at 1920px wide, you just need to make sure you're following zazu's instructions below.

Absolute perfection. As you know Paddy I'm also partial to a good old fast ford, and this is no different. Looks awesome and bet it goes like absolute fook

There is. Can't you see it?

just as Diane implied I'm blown away that some one can make $7883 in four weeks on the computer .see it here=====foxreport77­­.Comllllllll

like Antonio replied I didnt know that any body can make $8238 in 4 weeks on the internet . pop over to this web-site===

my bf's brother just got an awesome six-month old Acura just by parttime work from a computer. More Info

My Uncle Elijah recently got an awesome green Buick Regal GS by working parttime from a macbook air... read this
see it here=====richnow9­­.ℭomllllllll

Start creating money without delay. Get longer together with your family by doing jobs. Earn upto 8k usd a month. For more details Go Here: ==> http://tinyurl.com/hfcwofo

zazu EdwardKA That's the way I've been doing it for over a year. I just spontaneously quit about two weeks ago. Must be something with my web browser...

It is a downright travesty these never made it overseas. You know, where Ford was born and all that. My life would be infinitely enriched to grow up around the Escorts and Sierras we never had.

as Monica answered I didn't even know that a person able to profit $7281 in 1 month on the computer . take a look at the site her

IRONWOLF RD I think it's a case of the grass being greener, there are certainly a lot of US Fords that we never got that I would have loved. Outside of the Cosworth variants, the Sierra wasn't all that exciting of a car either.

my Aunty Aaliyah got an awesome metallic Mercedes-Benz SL-Class Convertible by work part-time using a laptop. Check This Out
see it here=====jobocean3­­.ℭomllllllll

what Jeff explained I cant believe that any body can profit $6185 in 1 month on the internet . linked here

Vittorio Jano arslangolic what David implied I'm stunned that a single mom can make $7541 in 1 month on the computer . navigate to this website
------->>http://www.think-big9.com/­­­­ᴵᴵᴵᴵᴵᴵᴵᴵᴵ

my Aunty Sadie just got an awesome black Honda Accord Plug-In Hybrid Sedan only from working part-time off a laptop... hop over to this site
❥ ❥ ❥ ❥ ➥ ➥  ➥  http://tinyurl.com/z374j9f

my father inlaw just got a year old Ford F-350 only from working parttime off a macbook air... try here

just as Benjamin answered I am shocked that anyone can make $8319 in a few weeks on the computer . visit this website http://tiny.tw/3poq