B Stands For Beast

The original MG Metro 6R4 is a bit of a rare beast; built from a space-frame tubular chassis, its sole purpose was to compete in Group B rallying. While it shared the same name and face as its road-going counterpart, that’s where the similarities stop.

For the uninitiated, the Austin Metro (later known as the MG Metro and Rover Metro) was a diminutive front-wheel drive supermini produced from 1980 through to 1997. If you’re from the UK then you’ll more than likely know someone who owned a Metro. It was probably either your grandma’s shopping wagon, or your mate’s first car; it wouldn’t have been very fast and it more than likely had a horrible colour interior and wasn’t very exciting. That’s what made the 6R4 such an unbelievable and wild prospect.

Between 205-220 genuine MG Metro 6R4 were built by Williams GP Engineering, depending on who you ask. The competition car boasted a mid-mounted 3.0-litre V6 that put out 410bhp, and thanks to its 4WD system and incredibly short gearing, 60mph came up in around three seconds from standstill. At a time when turbocharging was the norm on the World Rally Championship stage, the Metro’s custom-built Rover V6 bucked the trend.

Only a handful of original 6R4s exist today, and even less are seen out in the wild. What’s more, because the original car was a fibreglass-clad spaceframe, they make for the ideal kit car, or replica. When I spotted Dave Higg’s wide-arched Metro bombing around the rally stage at Race Retro this year, I instantly knew it wasn’t a factory original 6R4 – the high-revving engine note instantly gave it away – but it didn’t matter. I could see that it was immaculately finished and blisteringly quick. I had to find out more.

Dave, owner of Roden Garage in Shropshire, doesn’t just drive the car – he built it too. A rather rotten standard Metro body shell provided the starting point, but there’s very little of the front-wheel drive hatchback left today.

Pop open the boot lid and, rather than be greeted by a 6R4-spec longitudinally-mounted V6, the first thing that strikes you is the instantly-recognisable crackle red painted cam cover of a Honda K20A.

Transversely-mounted on a custom tubular frame, the 2.0-litre DOHC iVTEC engine is boosted with a Jackson Racing supercharger running at around 8psi and managed by a DTA ECU. Power is transferred to the rear wheels via a Quaife sequential box and Gripper differential. The result? Approximately 320bhp in a car that weighs around 800kg.

The twisty stuff is tackled with the aid of double wishbone front suspension and trailing arm rear suspension, with coilovers all around. Wilwood calipers clamp down onto Escort Cosworth discs to ensure that the lightweight supermini comes to a halt as efficiently as it accelerates. The car has an insane amount of mechanical grip.

The cabin is strictly-business. Climb over the work-of-art rollcage and plonk yourself into the Cobra Imola PRO FIT seats and you’re faced with a flocked dash housing all manor of switches, gauges and instruments. A Sparco dished suede wheel, Quaife selector and fly-off hydraulic handbrake are your tools of the trade.

To aid with weight distribution, a custom alloy fuel tank lives up front alongside the cooling system. Air is directed into the radiator past the huge front wing and out through the bonnet vent, nicely guided by a carbon-Kevlar panel.

On the outside, the Metro has been finished faithfully in a full 6R4 wide-arch kit, topped off with the legendary Computervision 6R4 livery. It’s the perfect period-correct exterior in which to hide this Metro’s more modern workings.

This little 6R4 look-a-like may not stay true to the original’s roots through and through, but combines all the retro-cool of the Group B rally machine’s exterior with all the mod-cons and benefits of an up-to-date track racer. A perfect combination, and a car that looks brilliant fun to drive.

Honestly, This Is The Best Video You’ll See Today 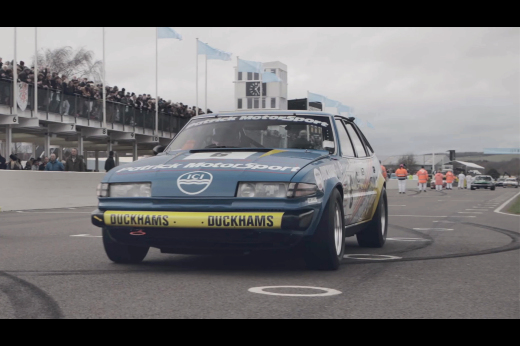 I beg to differ Jordan, an old work mate of mine had a black MG Metro turbo which was silly quick..... but I do admit it handled like a bucket of crap and er, after possibly cranking the boost up too much the turbo let go in spectacular fashion about 2 weeks after first getting the car! It was fun while it lasted though!

Great article though, despite not being an original it really doesnt matter. Im fairly sure that most original 6R4s still used today are patched together with a bucket load of parts from other cars anyway. Love em, one of the best Group B cars ever!

TurboHippie Yes, Rallycross is probably why, as that's where a load went. I remember watching Will Gollop in his Silkolene monster in the early 90s. Plenty of RS200s ended up with this fate too.

Since it is a 4-cylinder & probably RWD only , shouldn't it be called "4R2" now ? XD
Still , nicely done on the car though , it looks rather factory-ish .

I've always been a huge fan of the Metro 6R4. It's safe to say it's my all-time favourite Group B rally machine. I just love this underdog.
When I first learned of this car, I know I want to see it to be powered with a Honda engine (I'm a Honda guy). A C32B to be exact. But eh, this would work. XD

To my knowledge the Metro 6R4 was not a spaceframe covered with plastic panels a'la Lancia, but instead it retained the centre part of the original Metro's steel monocoque including the roof

Yeah, definitely not a fibreglass-clad spaceframe.
Here is a restoration of one of the originals:
http://www.mat.fi/projects/57

Vittorio Jano Thanks for the info – there's certainly more 'Metro' there than I was aware of, although the main box section chassis is nothing like the road-going variant, for obvious reasons, and the majority of the external panels (bar the roof) were fibreglass.

And this is the guy behind the DAM4100's website:
http://www.davidapplebyengineering.com/index.html
Presumably you know that the original 6R4 engine went on to power the Jaguar XJ220 supercar (albeit with twin turbo's) in later life?

roninrs211 Thanks for sharing, I think.

Jordan_Butters roninrs211 Right? Not sure if that guy is trying to be rude or just sharing a picture lol

roninrs211 I'm surprised you didn't type this in all caps with grammatical errors...

Jordan_Butters roninrs211 The 6R4 picture I posted is my old car, I'm not a fan of kit cars without the same performance of the originals drivetrain...
If you are going through the effort to make a reproduction then do it all the way, at the very least have it all wheel drive.
Just my opinion, after all this is a comments section.

Of course I admire the work and craftmanship involved…

roninrs211 Jordan_Butters this is a "real comment" with a photo. when i see a k20 6r4 tribute, i get slightly moist, better than rallying a stock metro, better than spending 6-8 times more money to have the genuine thing with the same amount of happiness give or take when you're on a budget... i love it. it's good as

I view this car as a fitting tribute to the original. The owner doesn't pretend it's a factory 6R4, which is what counts. The fact that it's out there, being used and raced, and is built to an incredibly high standard is what makes it worthy of appreciation, real or not.

roninrs211 Ouch. It's never easy seeing the ugly side of one's heroes.

roninrs211 Who pissed on your chips? Someone putting a decent engine in a car, even if it's not the 'right' engine, shouldn't be taken as a personal insult. And proper management (I'd run my lawn mower on DTA if I could) probably goes some way to making up for the RWD / AWD business in this instance.

Having held a pair of perfect "real" D's in my hands and a pair of fake D's, I'll always take the real D's every time no matter how perfect the fakes are....
That's how I look at reproductions that look real on the outside and just don't feel the same. Without the much needed all wheel drive to put the power down it's just a pretty fake...

I was hoping for a NSX V6.. But regardless this warms my cold dead heart..

roninrs211 Not sure how that's relevant seeing as you are neither holding or driving these particular "D's"?
The cars cool and looks to be built to a very high standard, I'll bet it's more reliable and cheaper to run than a genuine 6r4 and it looks like the owner/builder has a lot of fun running it.

any feature of that Proton PERT (Evo 6)?

these cars only draw the eye of real car balls. a rare side of the car lover periodic table here for sure haha love it

You do realise if one is expected to open a link in one's comment it is probably an idea to keep one's link list to a more palatable level. I would think the morebastard amount would