A big month of Speedhunting is about to kick off, but before we go full noise into January 2015 it’s time to take a quick look back at December’s feature car line up. It was an eclectic group too – from an imported DR30 Nissan Skyline in the US, to a reinvented Mach 1 Ford Mustang in Japan and everything in between, including a few crazy creations from wider continental Europe.

Now it’s time for you to select your favourites – revisit the stories by clicking the links, and then let us know which one/s did it for you in the comments section at the bottom of the page.

In the order they appeared on the site, let’s take a look…

The Most Powerful Rolls-Royce Ever

Akaishi Special: The Joy Of Honda

The Thunder & The Lightening

Dropped Out Of A Wormhole: The Sbarro Grand Prix

Super Starion: The Car That Does Everything

Your pick/s of the bunch? Don’t forget to comment below!

The Cars of November 2014 Revisited 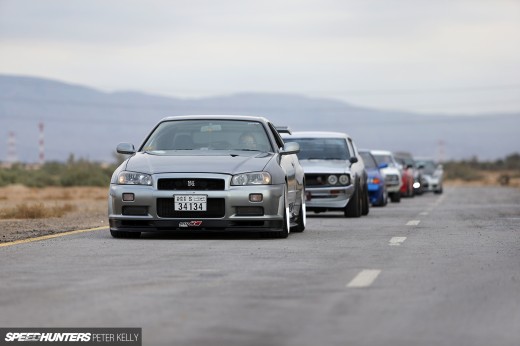 The new american dream!
When is the car of the year being announced?

This month's easy: I vote for the Chrysler. That's quite an uncommon platform to work on.

Must be the Starion!

AS a Golf MK3 owner I have to go for the Golf.
Such builds are rare to these days.

I have a terrible soft spot for Morgans. Not particularly the three wheeler, but the art deco styling in general. It's timeless!

The Ken Auto Toyota Crown is also special to me. There's so much that's just... right... about the whole build.

I gotta say that mk3 golf

I don't know why, I wasn't a huge Daytona fan, but I am liking what was done to the Starion... It is my vote this month!

The starion for great custom work in a functional package, the DR30 for that oh so boxy figure

The joy of honda

The Metro for sure.

God, that's a tuff one!!
I'd say Starion, Escort Morgan and MR2.

Close between the Starion,  IS300 and 6R4 but Group B just continues to make me love it even more so its gotta be the 6R4

Hands down the Sbarro Grand Prix

literally no votes for the Rolls?!
well considering that some of them are probably are all soggy, ill vote for the Wraith! lol

A strap dangles within the ceiling, a door play or ought in relation to whatever
else. which is largely used for almost everything feature out of muscle and also
aerobic instructions in order to stretches. though special coaches are actually
while using the http://www.trxtrainingaustralia.com/
for assorted decades.
Straps previously referred to also period of time
adjustments so concerning retain a person secure and appear as well as decrease
from the precise similar time frame. Most importantly down, the full offer http://www.cheaptrxforsale.com/ about solely
various pounds.
The following http://www.trx-australia.com/ is adjustable at the same time, providing this trouble-free to make
use of for virtually every everyone. just about all from the sessions which
you'll conduct on this are generally closed string.
Straps previously
defined in addition phase alterations and so relating to maintain a person safe
and seem possibly at cut down inside the highly accurate exact same time period.
To top http://www.trxtraininguk.com/ all away, the full
package deal has a weight of simply a number of lbs. don't be turned off simply
by its set free seems to be.