We last left off with a little history lesson on the Bill Thomas Cheetah and a look into the shop that is building them again today. Fortunately during our visit to BTM we were able to coordinate a photoshoot with the #004 Cheetah that Robert Auxier built back in 2004.

The car has moved around the United States and changed hands a few times, so we were happy to find out that it was stored at a local hangar.

Since everything at the BTM shop was a work in progress, we were fortunate to have access to this example so we could do a walk-around and show you all what a completed Cheetah looks like.

We’ll start with the heart of the beast then – in this case a 383 ci SBC. Some might consider this a typical muscle car engine, but it’s plenty to push this little car around a track at a competitive clip. It’s worth noting that Cheetahs came with 327 ci engines in ’63 and ’64, with some getting bored and stroked to 350, 377 and even 400 ci for racing. It’s interesting that there isn’t one ‘correct’ engine for these cars. It seems like as long as it’s a Chevy V8 it’s fair game.

One of the most defining features of the Cheetah is the engine setback, so much that the driver ends up sitting with the drivetrain, rather than behind it. See the insulated boxes under the headers? Yeah, that’s where your feet go. The owner of this car wrapped the headers in an effort to mitigate the heat coming through the already insulated sheetmetal.

From the outside one might think this car packs some sort of exotic mill, but you have to love the simplicity of a tried and true Small Block Chevy…

…with a Holley four barrel just like you would find on many muscle cars and hot rods.

Since this car was originally built for the track (BTM also does street builds) it received an oil cooler and remote-mount filter.

Typically Cheetahs have open pipes but this owner added a set of Supertrapp mufflers, a good choice since they retain the side-pipe look.

With the engine mounted so far back there’s plenty of space in the nose of the car. Since this was a race build there’s some extra gussetting in the chassis, but notice the license plate mounted to the front tube?

The current owner has converted it for street use and had it titled and plated!

Peeking inside we can see the maze of tubes that makes up the structure of the car. The interior panels are mostly fiberglass like the exterior.

Lowback buckets were pretty typical in ’60s racecars, although these are more modern suspension seats.

The gauge package is vintage Stewart Warner like you’ll find in many hot rods and race cars, and the steering wheel is a familiar Moon model. That lever behind the shifter is for reverse, and isolates this function from the forward gears in the name of safety.

When you’re sitting wrapped in a drivetrain things like the wheel tubs become part of the seating arrangement and the rear trailing arms end up inside the cabin. I’m a nut for details and was for some reason intrigued by the boxed mounting point with a single lightening hole. Turns out the first Cheetahs used a single shear mounting point here, so BTM makes this stronger double shear version for track cars. A byproduct of this design is the ability to shim the trailing arm side to side to affect rear toe settings.

While we’re on the topic of suspension settings, let’s have a look at the front end. Clearly built for racing with tons of adjustment, BTM stays mostly true to the original design here. This car uses the more tunable Koni for track duty, while the street builds get QA1 coilovers.

Look at the adjustment built into the swaybar: Can you say tuner friendly? Also notice the lower coilover mount which isolates the load from the horizontally mounted heim joint – a very smart Bill Thomas design.

Robert has refined the upper arms to be more easily adjustable too. A special machined hex sleeve allows for changes without unbolting the heim joint from the spindle.

I think I’ve tortured you enough with the details. After all, it’s the bodywork that made your heart skip a beat, right?

With everything shoved so far back the Cheetah accomplishes a staggering 40/60 weight split with fuel and driver. That’s 60% over the rear tires…using standard rear wheel drive components…in a longitudinal layout! This is the brilliance that is Cheetah.

It’s also why the car is flat out gorgeous. Bill Thomas and his designer/fabricator Don Edmunds went #maximumattack on the proportions, and somehow had the eye to ensure it came out the other side looking fantastic. Car designers study for years to accomplish what these two busted out in a race garage.

The Cheetah borrowed more from Corvette than drivetrain and suspension parts – it uses tail lights from a ’61-62 ‘Vette too. These have been seen in various configurations, such as the use of dual lights on each side. The monster gas filler is an old Indy car unit that’s no longer available. 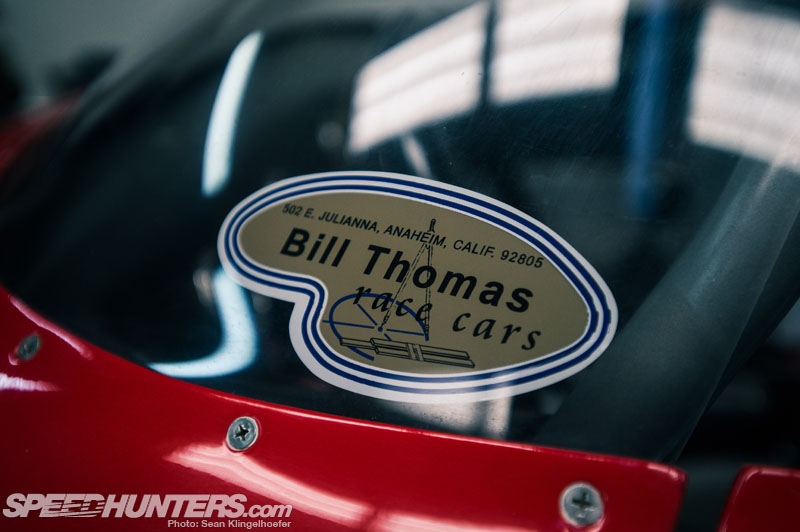 BTM even reproduces the original Bill Thomas stickers to put on their builds.

The door handles are rudimentary, but that’s how they were originally crafted. BTM plans to come up with something nicer on the Super Cheetah replicas.

A company called Aircraft Windshield forms the acrylic windows, which are then attached to the body with flush-mounted fasteners. Notice the prominent vents behind the door to draw heat out of the cabin.

Most of these cars never came with side windows, but today you can check a box to have them added to a new build with BTM.

In ’63 Bill Thomas spec’d out magnesium Torq Thrust wheels. Fifty years later they’ve stood the test of time. Fortunately American Racing still makes the Torq Thrust, albeit in aluminum now. These are the ‘D’ model, which stands for disc brake. The back side of the spoke is flattened to clear the caliper.

For a passion project the Cheetah is hard to beat. It’s a simple formula that uses pedestrian parts to create an exotic result, eliciting an emotional response from anyone who sees it. It must be impossible to drive this thing and not turn heads and answer questions everywhere you go, and when a car can stop anyone in their tracks you know you have something special. Okay, you can go check the web for a body shell now – I know you’re scheming to build one! 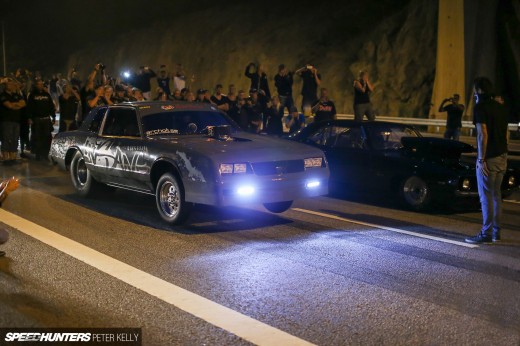 Street Racing in Stockholm:
Welcome To The Underground 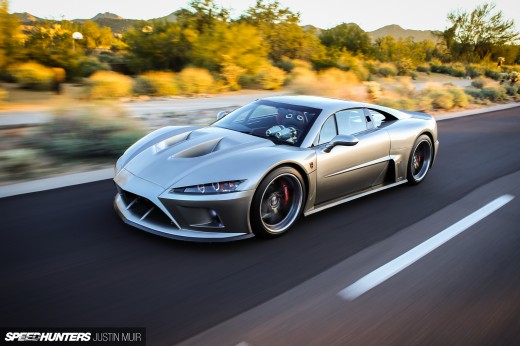 Sean klingelhoefer, why write an article on a guy like Robert Auxier? You buy from him and you takes your chances. Look for him online and see people who sued him, he takes the money and doesn't deliver. Saw a post on a forum from bill Thomas' family saying they cut all ties with the guy! Do you research people before you do a story.

This is catapult! The HotWheels car haha! Such a cool car!