It’s time to finish up taking a look at what has so far been the most extreme Toyota 86 build we have come across, and again many thanks have to go to Ross at AVO Japan, Paul at AVO America, Droo-P, Up Garage and all the other companies involved in the build of Hibino’s 2012 D1 car.

You can see that the car is still wearing the Falken livery that was quickly done back in January when it was, in stock form, driven at the D1 Exhibition during the Tokyo Auto Salon. The body, along with probably the coloring, might change but we won’t find out until next month…

…so let’s concentrate on the more evident details starting off inside. Like we saw in Part 1 the interior has been completely stripped out and modified in specific areas like the transmission tunnel, boxed out in order to fit the Hollinger sequential.

A custom linkage has been made for the shifter seeing the racing gearbox is far shorter and more compact than the stock unit. This of course also called for a modified propeller shaft but more on that further down.

Here is a detail of the custom roll cage, gussets welded on to the B-pillars. Some of you noticed how the construction of the roll-cage differs to some of the more complex cages that are built in drift or race cars abroad. D1 doesn’t specify any guidelines to roll-cage construction so it’s up to the tuner to fabricate what he sees as the best cage for the application.

The AVO guys were also busy at work on the dashboard, which was removed to make it easier to fabricate the custom switch panel for the center console…

…and the carbon fiber backing plate onto which the Link LCD dash unit and data logger would be fitted onto.

There you go, perfect fit!

…pass along the transmission tunnel, under the Tilton brake bias adjuster…

…and right into the trunk. As you can see above, the stock fuel tank has been retained, with two upgraded in-tank fuel pumps sending the high-octane juice…

…to the collector tank in the trunk. The fuel is cooled through a little radiator…

…as well as this bucket-type cooler which is filled with ice, or even dry ice.

The big Optima Yellow Top battery has been fitted centrally in the back of the 86, where the stock rear seats would be.

With most work almost complete it was the custom wiring loom that needed to be fitted and laid out around the chassis next.

This is the mess of wires that are needed to make everything work, all measured and cut to just the right length and grouped together as required.

It’s a tedious job and one that calls for years of experience, not to mention lots of patience, which is why…

…John Marsh, or “Crazy Gaijin” as some Japanese started calling him during his time here, from AVO Australia flew up to Japan to take care of it all. He is a specialist in this field and was casually chatting to me while neatly organizing tiny wires together. Crazy stuff!

Here is the almost completed loom!

While I was buzzing around the workshop shooting pix of the 86 and AVO’s GDB, Ross had shortened one piece of intercooler piping and was welding on an aluminum plate onto which temperature and pressure sensors would be fitted.

Thankfully there was still a bit of snow left in front of the shop from a few days before which proved to be perfect for cooling the pipe down after welding.

It was then on to drilling up three holes on the plate and threading them, ready to accept the sensors. With all of the tools and machines that AVO have at their fingertips this was all done in the space of ten minutes!

Let’s move on and take a look under the rear of the 86. The rear subframe…

…and stock differential housing remain, but have been joined by a lot of other upgrades beginning first with the modified propshaft, and a Cusco 2 Way LSD.

Again from Cusco are the adjustable pillow ball lower arms and traction rods.

Here is a view of one of the rear DG-5 dampers, along with the Swift main spring and smaller helper spring. You can also spot the orange AVO polyurethane stabilizer bush deep inside the lower arm.

Another look at the Cusco parts. Cusco will have a complete lineup of parts available for the Toyota 86 and BRZ available from later on this month so those lucky enough to get their hands on one of these cars will be spoiled for choice from the get go on upgrade parts!

AVO fitted their rear stabilizer reinforcement brackets, a mod I’ve been wanting to make to my Legacy for a while now. Like on Subarus, the 86’s stabilizer mount is made from thin steel plating which bends under stress, throwing off the full effect of the stabilizer bar. This steel plate helps keep things nice and firm, giving a better feel from the rear end, improving things like mid-corner adjustability and turn in.

Like up front, rear braking is handled by Project µ calipers, small 2-pots biting down on larger diameter slotted discs. Last night Ross had the car on the Dynapack hub dynamometer at AVO and did an initial set up of the engine to make things everything was working as it should. The car is on the way back down to Okayama now where the body part of the project will be addressed along with smaller things. Before the car left AVO last night Ross grabbed a shot of the completed engine bay…

…not bad right? And to answer some of the questions from Part 1 as to why the Cosworth intake plenum hasn’t been rotated 180º, the reason is simple. Ross wanted to do this to keep piping shorter and more direct but this can’t be done due to the positioning of the mounting bracket of the Cosworth dry-sump oil pump which is right in the way.

I can’t wait to see this thing in action through the tight Odaiba course next month! Don’t forget this will be one of three Toyota 86 D1 cars; HKS are busy at work preparing Nob’s machine ready for his return into the series and of course there is Orido’s 86, powered by the Lexus ISF’s 5L V8, which is in the final stages of the build. These cars will no doubt inject much needed excitement into the D1 Grand Prix, which has been struggling for years to attract the same big numbers of spectators it used to during its heyday. 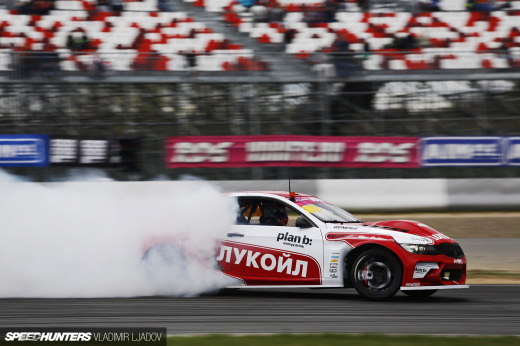 Saito, Blušs & Hibino: This Is The Russian Drift Series

So awsome. Cant wait till theese come out in the U.S.

They shovelled the ISF's V8 into that bay? Damn.

Looks like it's going to be a very well balanced machine when it's done! However, I'm puzzled as to why they ran the fuel lines thru the interior. . . I guess there aren't any rules to keep them from doing that.

man this should floor the competition or at least give them a good run for their money. its well on its way and seems to be ticking all the right boxes.. John Marsh the 'Crazy Gaijin' reminds me of John McCririck the tv horse racing pundit.. but i bet this guys knows his onions!

Amazing, cant wait to hear a boxer sound out of a coupe

Man, i like it when you guy's go in to detail (the photo's) on such nice builds!

Hi, when you saw this carbon fibre use correct mask because it is even more dangerous to breath thouse fibres, it is like asbestos. I hope you think that.

Dino, it's "funny" how you blow out of proportion people skills and ability to do something.

John Marsh is certainly not the only individual caable to put together an harness from scratch. I don't understand why you say "crazy stuff". Care to explain?

How much to purchase?

Fuel lines through the interior and that MASSIVE battery held down so flimsily? The safety in this car is sketchy as hell.

As a JDM fanatic, I have no words about why they decided to run the fuel lines in the cabin.

It just spells trouble to me.

Whoever is building this car, do Hibino a favor, and run those fuel lines under the chassis!!!!

JDMized- STOP HATING BUILD YOUR OWN 86!

I've no ideas on all the why's and whatfor's of D1 build regulations, but they are what they are. And as all the uproar about the placement of the oil tank proved, not all the people here understand the difference between a race car built for the track and a D1 Drift series car. Different needs, different regulations to the build. For all I know, due to the type of off-road stunts that happen in D1 (and they happen, often), they found they needed to move the fuel lines out from underneath because they kept getting ripped off.

@ Avoworld - Thank you for shutting up JDMIzed, he's a freakin internet troll that only craps on someone's build.

@juicy j Hes not hating, are you a fan of burning to death? I doubt hibino is either.

'John Marsh' or 'Marshy' as he is best know for in Australia is one of the most underrated auto electricians I have come across, the years and years of experience this man has with the Link ecu and Subaru's would be second to non in Australia and no doubt world wide. There is no man better qualified for that job, if anyone could do it do you honestly thin Ross would fly Marshy out there?

Again great write up and perfect photography, this really is why Speedhunters.com is so far in front of other websites.

Keep up the great work AVO!!!

@D1RGE.EXE well put man. It's funny how all the E-engineeers in here scrutinize every little detail and catch a tone even when it's all explained in the post....enjoy a quality build!

all you guys saying fuel lines are sketchy... the lines are fed inside on all subaru's.