With the coming of each SEMA Show, it seems that the Pro Touring builds get more and more extreme. This year one of the wildest Pro Touring cars at SEMA was the Innovator, a ’67 Nova built by the Roadster Shop.

There has been an incredible amount of work put into this car. Much like the Road Runner we saw the other day, there is very little of the original model left in this build. The entire car has been built over one of the Roadster Shop’s F-AST TRACK chassis, while the body has been completely redone. Here you can see the custom fender lines and side-exit exhaust for example.

The entire rear end of the car has been styled with a very futuristic look.

The front fascia has been completely restyled as well. Kind of looks like something from Transformers, doesn’t it?

A closer shot of the redesigned headlight bezels.

The taillights are all new as well.

Check the mirrors. Looks nothing like what came on this car back in 1967.

The Innovator is powered by a 454 LSX motor that’s said to make just under 700hp.

The wheels have been designed and built specifically for this car. The fronts are 18×10 while the rears are an enormous 20×12. Baer brakes sit at all four corners.

The interior has also been modernized, up to the point where its almost sci fi spec.

A mild chop and flush mount windows make the car look that much sleeker.

All in all it’s an amazing build that stood apart from the crowd of Pro Touring cars that pop up at SEMA every year. 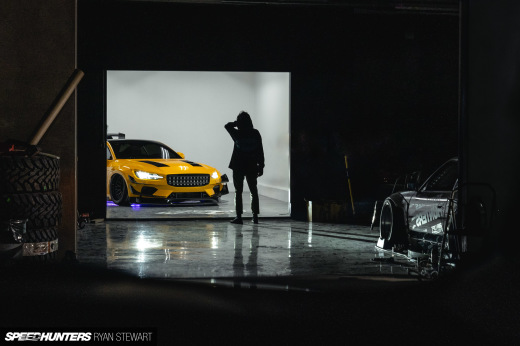 The 72 Hours Before SEMA

wow this is a beauty. It a literal translation of a paper sketch. the color and all. Thanks Mike for taking the shots, I imagined every one of your pictues as a drawing.

Strange looking front grill, and the interior is a bit too white for my taste- But overall, I like the retro-futuristic theme of the car. I can't even imagine the amount of work this car must have took, gotta appreciate builds like these. Fantastic quality, hands down. Congratulations to Roadster Shop

That is how new cars should looks like, not some rubbish plastic toys without soul.

I love this kind of cars

Here's the build thread on this car.

they ruined the car with all the cheesy bodywork and the "sci-fi" interior. Im all for moderniing these classics with newer engines, suspension, etc., but they just went too far and destroyed the original character of the car. 10 years from now this car will be extremely dated-looking

Awsome car with a great finish !

Engine bay is a work of art. The front grill and the trunk are ugly.

too bad those cluttered lights and grille break up the awsome lines on that car...cause that thing is so fire

Incredible, the level of finish from these cars is something to behold, SO much higher than anything you would see from even the greatest Euro builders. These look like they are out of a factory, in a good way of course.

UK pilgrimage to SEMA next year for sure.

i love it now were can i buy me one

Now THIS is a serious custom build. WOW.

Don't like the Interior... But the rest is awesome :O

Beautiful, watched this build very closely on ProTouring.com. An amazing classic if you could still call it that.

Oh boy another cheap and plastic lookin happy meal car to go along with the "59 vette" from the other day! Seriously these look like poorly done Chinese knock-offs of the originals.

It's too much for me, top notch workmanship though.

does this car drive, the engine bay is too perfect, everything looks fitted into place, doesnt the engine flex under driving conditions? the car is a proper proper car, sweet looks!! but the engine bay have me weak

some will hate it some will love it

But i like the amount of attention to details..

this is simply superb

i do like the car, if they had made it completely from scratch. there is absolutely nothing not amazing about it, but destroying a nova?

i think its pity for the sake of the classic

Is that a Hot Wheels ?

I love the interior

This is a great custom car, and a valiant effort, but it's not a Nova. This is sort of like having your grandma dressing up like a schoolgirl. Something about the shape just doesn't fit with the custom head/taillights and "transformer"-type graphics. Just MHO.

I really like how they continued the pattern seen on the grill in various bits of trim, paint, upholstery, etc. Love that level of detail.

that is the ugliest nova i have ever seen........some idiot probly paid a 100 grand to have this disgusting thing built...

sorta looks like a nova concept car. very cool. not feeling the wheels though haha but the rest of the car is amazing. top quality work.

I think Mark Arcenal built it!

I don't really care for corny, classless, plasticy projects of this sort... way too cartoony for my taste. It looks like it was detailed for Rodger Rabbit using Midnight Club: Los Angeles.

I worked for Napa over the summer delivering parts and went to the Roadster Shop almost every day, saw this thing on the street outside of their shop a few times, and my god did it sound mean

Unbelievable execution of a theme on this car, by far my favorite car at the SEMA show! There are so many cookie cutter bolt together resto mod cars and the fabrication really stood out on this one.

67 nova is probably the most plain jane gm muscle cars, it was basically a box on wheels void of any styling whatsoever, gm must have used all their good styling ideas up on the camaro that year. Like it or not my hats off to these guys for taking a boring car and making it sleek and interesting

Awesome!! This goes so far beyond what is traditionally thought of as a 'hot rod' or 'custom'...more 'Concept Rod'. I saw it in vegas and it blew me away. Makes everything else just look like 'do-overs' of a safe and expected theme. While the styling may be down to personal taste, as a concept it is like a breath of fresh air to the hot rod industry.

Artwork on wheels!!! I am blown away, first class build