The Spectre Carbon Camaro didn't start out as the menacing wide-stanced monster it is now. When Amir Rosenbaum bought the car, it was like all projects, rough and parked in a corner for years while the team tried to decide what to do with it.

The Spectre crew works with several talented fabrication shops on all their projects, and the team at Campbell Auto Restoration in Northern California took  the Carbon Camaro from project status to finished race car. We spoke with Mark and Tom at Campbell to get some of the details of the build.

"When we took on the project for Spectre, we showed Amir a lot of photos of vintage racecars trying to get ideas for the build. This 1974 IROC race car is one of the inspirations for the modern Spectre Carbon Camaro. When the Camaro was chosen to be the IROC car for the 1974 season, they built about 14 cars. This car won most of the races that year. It was considered to a freak of some sort and retired after racing only that one year. Roger Penske made that choice saying that the car had extraordinary good luck and that it would be an unfair advantage to let the car be raced the following year. Amir wanted to build a car with the looks of the IROC car, and a modern drivetrain and handling." -Mark Schwartz, Campbell Auto Restoration

The most extreme change to the '70 Camaro isn't the wide rear tires, it's the engine and transmission from a modern F-body. The Camaro came to Campbell with the engine and trans from a wrecked 4th gen Firebird already partially installed in the car, but the guys ended up moving the entire set up back almost two inches, to make more room for the Spectre dual snorkle induction system and MAF sensor. Moving the drivetrain back was pretty straight forward, and they were able to get the space they needed without any modifications to the stock firewall. As an added bonus, moving the engine back improves weight transfer!

The sheet metal theme of the exterior aero modifications is continued in the Camaro's interior. A formed metal interior is lightweight and looks clean.

Sheet metal rear wings are a Spectre trademark. The wing isn't just for show, it adds downforce and high speed stability on the track.

"The original IROC rules stated that tires could not stick out past the body of the car, so teams simply widened the bodies with fender flares. After Amir picked the '74 IROC car as the inspiration for the Carbon Camaro, we hunted down a place in Canada making reproduction IROC style fender flares. When the flares arrived and we mocked them up on the car, we were all unhappy with the way they looked.

Back in the day, people would cut large amounts out of the fender for clearance, so the flares were far wider than our wheel lip openings. These days, cutting up a pristine quarter panel on a muscle car is far less desirable, so we really didn't want to chop up Amir's Camaro." -Tom Dillard, Campbell Auto Restoration

The flares also stuck out over the tires, but didn't drop down over the top of the tire. This was to prevent cutting a tire if there was contact between cars on the racetrack, but it was not especially attractive. Since we plan to limit the amount of wheel-to-wheel racing that we do in the Camaro, we decided to make out own flares.

We modeled the flares off the originals, which we reshaped with bondo and foam and then made molds and pulled our custom one-off fiberglass flares.

The new flares were fitted to the car and reinforced…

…then bonded with a special metal-fiberglass adhesive.

Like the rear wing, the front air dam is there for more than just looks. Air dams help prevent air from going under the car, pushing it instead over and around the body. The Carbon Camaro also has the feed for the brake ducts located in the spoiler, so air gets funnels right where it's needed most.

The carbon work on the car comes from Anvil Auto. The pieces fit well and look great, all while taking off huge amounts of weight  compared to the  stock steel hood and front clip.

The Anvil nose comes in a single piece, no ugly seams!

In this shot of the car after paint, you can clearly see the brake ducting in the front air dam.

Spectre chose Hotchkis Sport Suspension for the underside of the Camaro. The bolt-on part required no modification to the frame, and fit with the idea of building a car which performed like a modern car, yet maintained the structure of an original muscle car.

Campbell modified the rear sway bar to allow for even more setting adjustment. Now the Spectre team can set the car perfectly for autocross, road course or street driving.

The engine is a built LS1, measuring 410 hp at the rear wheels with 400 foot pounds of torque. That's a beefy mill!

Next, Linhbergh will give us all a more detailed look on the completed car. 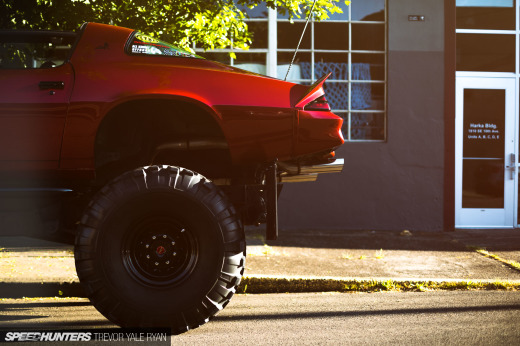 Something Different: A Lifted ’79 Camaro

I really love this car, thank you so much for build photos and information about the camaro.

I WANT! I love the look of the fenders!

Hope all is well and very cool car!

Such a small world. I had Campbell Auto Restoration do some work for my Syclone way way back in the day.

See you at the hill climb....with the wife's permission of course.

Will be keen to see how it finishes up. Looked badass in the before pic!

It's awesome to see old Camaros being built right this car is perfect great post!

Hope the original split bumper parts go to someone who will appreciate them!

love the nose and its all one piece!! i've got admit the 'arch-work' looks like it was done right! - another quality post - thanks

Small world for those of us with car addictions for sure! Good to see you here, and we'd all love to see you on the hill, even if you just come root for Jody.

Everybody, wait until you see Linhbergh's "after" photos of the car in action.

Love the seeing photos of things like people properly building flairs. Gives me lots of ides.

Thanks Elana, that is a really cool car, and a great build story. Can't wait to see it in person.