Ascension Day, 2010, Eifel Mountains, Germany.  The conditions are grey, cold, misty and muddy. The campfires are burning brightly, the fans huddled round trying to stay warm, the beer is flowing like, well, like beer, it is Germany after all. If the environment is somewhat hostile the expectation is huge, both on and off the track. The Nurburgring 24 Hours has developed into one of the great races anywhere on the planet and if it remains largely unknown except to the faithful that is a matter of time. Those in the know are here, scrambling for space to park their camper/car/tent/sleeping bag/livestock/beer keg.

Exploring the track was one task, exploring the paddock was another. With over 200 cars scheduled to take part in the 38th ADAC Zurich 24h-Renn, conditions in the paddock are a bit cramped, to say the least. However it was not hard to find the favourite for the race. Aiming for a fifth straight win is Manthey Racing and Porsche with the #1 GT3 R.  Victory would be a fourth in a row for the crew of Marc Lieb, Timo Bernhard, Romain Dumas and Marcel Tiemann. Who would bet against them?

Yes, SpeedHunters is represented with three cars for the Need for Speed by Schubert Motorsport outfit, two BMW Z4 GT3s and a BMW 320d………….more on them later. 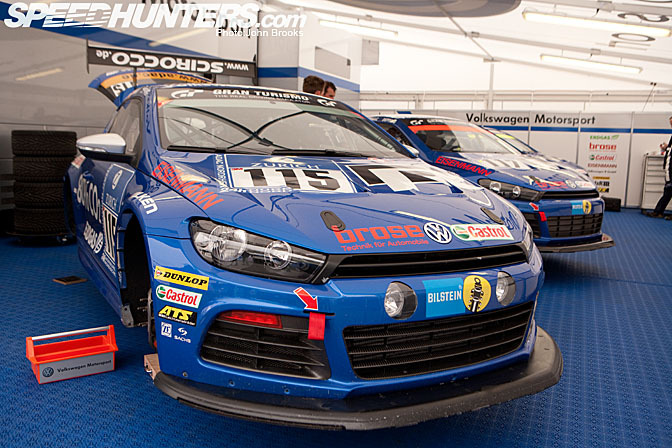 The mammoth task of scrutineering the huge entry begins on Monday, add in the 100+ entry for the ADAC 24h-Klassic and it is easy to see how the officials have to work in shifts. There are also races for Mini Challenge, SEAT Leon SuperCup and Renaults. The Top Gear Live World Tour is on site keeping the fans amused during the brief times when the track is not hot.

On the run  up to the race the teams find time to finish those jobs that there never seemed to be enough time to complete back at the workshop.

If the Manthey Porsche is top of the bookies' board, the two BMW Motorsport M3s are dark horses and certainly it would be foolish to discount any Team Schnitzer run effort. They know how to win and they know how to win the Nurburgring 24 Hours. Charly Lamm's boys will be there or thereabouts at the finish.

Perhaps the main challenge to the Porsche will come from the squadron of Audi R8 LMS entries.

Led by Phoenix and Abt Sportsline team the spearhead to this group will come from the #100 car with DTM hooligans Timo Scheider, Mattias Ekstrom and Oliver Jarvis being backed up by multiple Le Mans Champion, Marco Werner.

SpeedHunters' partner Falken Tyres are not only one of the race's title sponsors but also bring a Nissan Z33 Fairlady to the grid.

Another Japanese favourite is back, Gazoo Racing and a pair of Lexus LF-As.

The V10 SuperCar is always popular and the distinctive wail of the motor makes everyone trackside perk up as it passes.

Pre-race there is a chance to indulge in a bit of espionage, this guy will never get his "007 Licence to Kill" certificate though.

Sponsorship come is all shapes and sizes, some more intriguing than others……………….

With eight cars to a garage, consideration for your neighbours is essential, space is at a premium……………

And in the end without tyres no one goes anywhere.

Dunlop is supplier to many of the teams…………….the logistics of this task are staggering.

Engineers are called in from all over to cope with the scale of the entry. Dunlop's Graham Schuter tries to impart some wisdom.

As I finish this post, the drivers' briefing is going on around me, hundreds of drivers waiting to take one of the toughest tests in motorsport. The weather forecast is not promising, cold and wet is the best we can hope for.

Everything But The N24

This race is way bigger than i imagined.

thanks for the extensive coverage! such a shame I can't be there.

Watch out what you say about that smart though, Alok might not agree...

So I take it team NFS got the same window banner?

Gran Turismo really does have every car.

Does anyone know if it's going to be streamed over the internet this year? If so got a link?

This will be awesome coverage. Will be checking back often.

@Kieron, there's supposed to be video on the official page you linked to from Saturday afternoon, i.e. during the race..

will there be some pics of the classic challenge? theire should be at least a bmw m1 and the obvious stuff in germany (lot's of mercedes's, porsche's, opel's, vw's, bmw's and some alfa's).

i prefer the first headlamp style of the lf-a when it first made its debut on the ring... and i love that gran turismo is involved in this as well! epic!

yup you need tyres.. love those Scirocco's - never seen the one with the extra lamps in the front bumper before.. - it should be a race of epic feats judging by the line up and the 'bald facts' - nice photo's.. excellent coverage