The Beetle might be the people's car, and the Golf GTi the people's hot hatch, but the fourth BMW Show at Santa Pod proved that the BMW 3-series is without doubt the people's performance car – in Europe at least. The acres of car park were rammed with examples of all five body styles of the iconic 3-Series, and fleshed out with smaller corrals of other popular BMW models.

As usual for Santa Pod shows, there were three main areas to discover over the weekend. The car clubs turned out in force, with cars from all over Europe on display.

The Run What Ya Brung runs down Santa Pod's drag strip were busy if not packed, which meant shorter queues for those who did want to test out their machine's acceleration.

Over at the Handling Track, road-going BMWs alternated with the Drift Taxis, and a drift school was available off to one side of the track for those wanting to get a better handle on the finer points of opposite lock.

I always enjoy walking the queues for the quarter-mile. Often it seems there's a much lighter mood further back in the line, where drivers seem a lot more chatty and good humoured – often surrounded by friends helping push the car forward as the cars in front move up.

Then, as cars get nearer the front of the queue the atmosphere seems more tense: perhaps then the pressure of knowing you're not only pitting your car against the competitor next to you, but you're also being judged by crowd in the packed grandstands and on the banks opposite.

Just behind the start for the quarter-mile – you're next! To burn or not to burn?

Of course, if you want the crowd on your side!

When I was young I remember that a neighbour owned an E24 635CSi, and I was obsessed with it. It just looked fast even standing still, with its swept-forward nose and clean lines. Much as I think I prefer the car in its contemporary darker colours, this deep bronze finish made it stand out on the track.

You just know who you want to win when they arrive at the start trailing smoke.

BMW have always done big cars well: check out the flared arches and quad exhausts of this 850csi. A 5.6L 375hp engine and wide alloys made it something you'd definitely think twice about tackling on the motorway.

This E30 wagon has undergone quite a bit of surgery… A Holset turbo was poking out of a slot on the bonnet, which likely helped when you wanted to do this kind of thing…

Out in the car clubs you often had different body styles conveniently next to each other, making the class evolution clear. Most of the cars at the shows were clean and original, with only subtle body mods or new rims – BMWs generally don't seem to get uber-street treatment in the UK.

This 1602 wasn't quite up to the condition of the 2002 I spotted in London, but was still looking great.

Not a subtle paint-job on this hardcore yellow M3, but it somehow didn't look too out of place, especially with the matching BBS rims.

Along with a couple of AC Schnitzer-tuned cars, there were some lovely Alpinas around the site as well. This 1981 C1-2.3 Coupé, based on the BMW E21, not surprisingly won the Best Of Show award in the Show And Shine.

Not bad for a company that started off making typewriters: the Alpina tuning company has been producing modified BMWs since the late 1960s. Here's a B9 E28. This one has a sticker from the Sytner group of dealers: owner Frank Sytner won the British Touring Car Championship in 1988 in a BMW M3, and campaigned BMWs throughout his career.

Along with the rarer Alpinas and Schnitzer cars, all styles of M3s were of course out in force.

Two things that go naturally together: an M3 badge and a Nurburgring sticker. I'm sure every M3 driver wants to make the pilgrimage to the Nordschleife. At least they can now practice on their copy on Need For Speed Shift!

I think the iconic quad-headlights on the E30 can't be beaten for front-end 3-series looks.

One of the few modified cars on show: some nice rust going on with this E36, complete with decks on the roof.

The all-carbon front-end to this E46 reminded me of the Ericsson M3 that Dino featured earlier in the month – but this has even more raw fibre at the front! Nice stealth rims as well.

Thorney Motorsport brought along one of the BMW E46s they race in the CSL Modified Cup Class, which races as part of the Dunlop Great & British package in the UK. It even took a shot down the quarter-mile.

Here's the 635CSi in the paddock: it was one of a number of cars up for sale, though I just didn't have the cash with me…

The 7 Series Register had a great line-up of the BMW's luxury sedan in their corral. Here's a Schnitzer-tuned 735i.

Alpina-branded wheels on this E38.

One of very few 8-series on show: an 850i modified by Koenig Specials with a full body kit and deep wheels.

Then of course it was time to drop by the handling and drifting area. Even the bigger M5s seemed quite happy smoking around.

Lex from Drift What Ya Brung was overseeing the drift track and made sure there was plenty of action to entertain the crowd. The usual Japanese machinery was matched up against BMWs for a JDM vs EDC theme, and three-car drift trains were hammering round.

My highlight of the day was being taken out in an R33 drift taxi by Lisa, Lex's better half. I only managed to fire a couple of shots off as we were flying around – mostly it's a case of holding on and trying not to look scared! If you've never gone out in a drift car make sure you get out there at the next show to experience what it's like on the inside – it's even more impressive than watching from behind the barriers.

After a quick change of trousers, it was back behind the lens to watch more of the street cars. The arena provides a safe place to practice your drift skills, "without having to worry about the cops or the Kerb Dragon" according to Lex!

With a well-run event the only casualties are tyres: plenty more for the Santa Pod safety barriers.

Drift What Ya Brung 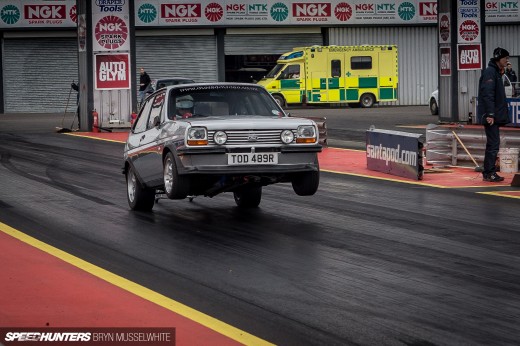 Flying High In A Ford
With A Subaru Party Out Back… 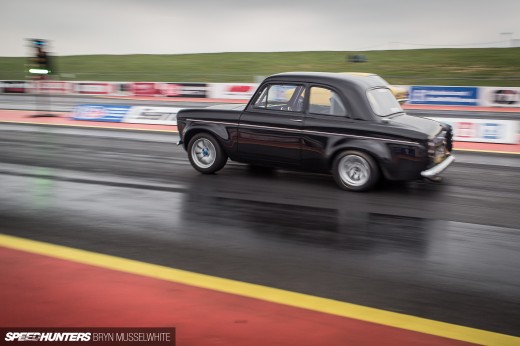 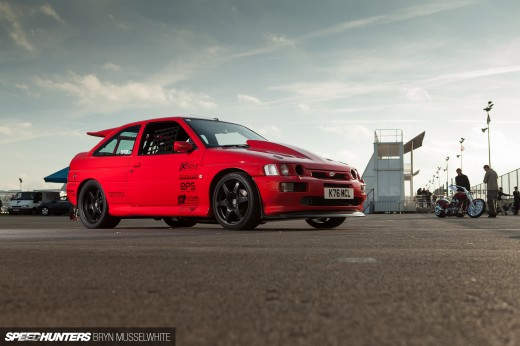 That ridiculous yellow one is most definitely not an m3.

I love the white walled 3 series.

what lip is that on the e36 with the white walls??

GAB, it looks very much like a Renault Laguna splitter to me!

espesialy after using the e36 on shift as my drifter

Stop with the BMW posts.

more piccies of the very 1st one plllleeeaaase

Hey Could we possibly get more on the bmw e30 in the middle of the 6th picture down it just looks sooo sick!!!

"BMWs generally don't seem to get uber-street treatment in the UK. "

which is how it should be done.

how can people tell if it really is a schnitzer or an alpina. how can you tell if its not just "up badging". hehe. im just curious.. im not judging anyone here.

and also, lovin tha koenig specials bmw. they are a pretty wild especially with the koenig special's ferrari's and porsche RS back in the day.