Ian Walling, aka ‘driveforward’ is a well known member of various SEAT and VW forums in the UK, thanks, in part to his exploits in his SEAT Arosa Track day car.

If you have read Speedhunters from the beginning, then you may remember our post on Paul Bindley's similar VW Lupo.

As part of Volkswagen Group, the Arosa and Lupo shared most parts, the car being built in one of SEAT's factories during the 90's. Both cars have become quite popular in the aftermarket community, with the Arosa being the rarer of the two. Arosa Sports are even fewer and far between than their Lupo counterparts, making this trackday version quite unique.

Ian has owned a number of SEATs and modded each one to various degrees and was an early member of SEATCupra.net, the biggest SEAT enthusiasts forum. He bought this, then stock Arosa 1.4 16v Sport, back in December 2007 and set about turning this car into a track day special, with one objective in mind. Tackling the infamous Nurburgring Nordshleife. After three months of intensive modifying, the car was ready for the 2008 season at the 'ring. 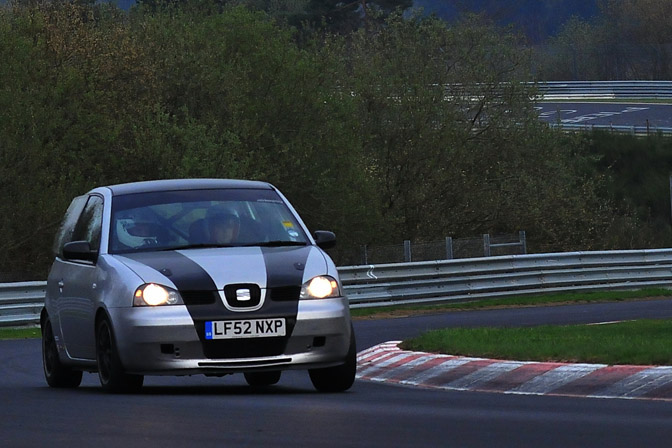 Although the car may only have a 1.4 litre 16v engine it still produces 116bhp (up from the stock 100bhp), however the key here is the handing and minimum weight to ensure maximum momentum can be carried through the twists, crests and complexes that make up the Green Hell. This combination has lead to the car receiving great attention, not least because it can lap in the region of 8minutes 50 seconds!!!

Having the catalyst removed and straight through exhaust helps, but fitting the 4-2-1 manifold released the most power from the engine. Handling has been transformed with KW Variant-1 coilovers and rear Jabbasport anti-roll bar.

Externally, Ian has added bespoke front and rear bumpers, Aerocatch bonnet/hood pins (now essential for Touristenfaherten at the 'ring) and some aggressive black vinyl touches. Brake ducts have also been integrated into the bumper, helping to maintain the performance of the brakes.

All non-essential interior trim and components were removed and heavy stock doors have been replaced by Aluminium parts from the Lupo GTi.

Internally, a custom OMP roll cage has been fitted along with Sparco race seats and the usual 6 point harness. The Arosa has been on a big weight saving diet and only the essentials remain. Electric windows and stereo remain- some practicalities are required for driving the car across Europe.

Despite the 'luxuries', even with the rollcage fitted, the car weights in at 980kg.

At least there is room for the important stuff in the back….

Although the car has been seen various track days in the UK, its main job is to thunder around the Nurburgring where it completed 128 laps in 2008, and had already clocked up 115 laps in 2009, and is only May!

In total, Ian has racked up over 275 laps at the circuit now, setting his record of 67 laps in one weekend in April!

The car gets lots of coverage on the forums, including SEATCupra.net and Club GTi as people are impressed how quick this car can take corners – especially the famous Karrussel.

‘Ringing isn’t always this much fun though.

Back in 2008, like so many regulars have experienced, an incident resulted in radiator and bodywork damage meaning the car had to be recovered from the track. The Arosa was shipped back to the UK for a rebuild, and returned to the ‘ring to resume lapping only one month later. When you attend regularly, you have to be prepared for such eventualities – it is the most dangerous circuit on Earth after all.

For 2009, the car gained the black bonnet/hood stripes to match the front grille and the black roof along with oil pressure, temperature and volt gauges. Great to see cars like this driven hard, and that is certainly the case with this Arosa!

Following the fitment of fresh brakes and tyres at the halfway point in the year, Ian will be back at the ring in June to resume the years lapping.

awesome post. seen this car in action. Its very quick

This is what you buy a car for.

How many lap the tyre lasts? 67 laps in one weekend. Go get a gf dude.

And, what is bespoke? bespoke bumpers in this case. I see them a lot.

this is shit man, i dont care about a fucking seat arosa on the ring, take it to the shopping mall!

My favorite Arosa for many reasons.

Nice write up and photos, many thanks

nice write-up. This build is great and shows what is achievable with a small supermini. What's wrong with taking an Arosa or Lupo on the ring? Mini Coopers race(d) in the 24H.

8minutes 50sec is bloody impressive for such a small car. I've also heard about this car on Pistonheads. Very quick in the corners. Someone who uses and abuses his car, a real petrolhead...or should that be speedhunter

Respect for the build, the Build thread is a great read.

Car looks great after winter overhaul, don't under estimate this little beast - it may have low BHP but shows you don't need big machines for the ring! just sorted ones.....

and to think this thing likely still gets over 28MPG, if not more.

I'd really like to see some AWD Micro cars in the next couple of years.

Just goes to show that all cars can be great when converted to track a weapon! haters are just jealous!

It sure is ugly, i agree on that point...but who cares, look at those figures....this car is awesome.

small FF cars are fantastic with this level of modification, one of my cars is an AE102r corrolla sedan. Full coilover suspension and all associated bits, full exhaust system, rebuilt and modified engine with new computer and bridgestone re-001's. Puts out 115 kw at the wheels, or about 150bhp. and only weighs in at 1050kgs with driver and fuel...I dont know many quicker guys that park and the pass...the "park" is 28kms, no issue beating my friend's A3 (unmoddified). Its quicker than my R32 GTR skyline through there (also unmoddified)

"Bespoke" basically means one-off or custom-made. it's a tailoring term.

i love the shot of all the erdinger in the back! what an awesome beer

Thanks BlueSlug, they have been smoothed and filled in from original Arosa bumpers. The original air intakes were filled except for small brake ducts, so as you say, they are bespoke.

The other pic I had was full of Warsteiner! ....only they were empty bottles LOL!

This car is very cool, having been a passenger round the ring last August on several laps, Ian certainly knows how to get the best from it, and it certainly does shift through the bends.

Nice little write-up. The guys giving grief really need to sit in the passenger seat with us.

Though, Ian, you must know that my Roadster is now exiting the 116bhp club and joing the 160bhp club. New project for the Arosa?

This thing is a riot at the NS. Credit to you Ian, get a pax seat in a human width and I'll consider another pax lap

Excelent little car. I have big respect for people that want to extract the most from the power they have without going mad.

Never judge a book by it's cover. I had the pleasure of a few pax laps with Ian during the Easter weekend, and they were some of the best I've had. Hugely entertaining, thanks mate!

I followed this rocket around the ring back in April. My god is quick. I've done a little racing (clubmans, FFord stuff years ago) and I struggled to keep up with him for a while in my Audi.... until the straights LOL.

But seriously, this thing is mental and from what I saw, he's a good driver.

I check this site daily and I love the eclectic mix of stories,,,but some of the comments on the site are very childish and not very knowledgeable. It lowers the quality of the site. How about being constructive guys? This guy should be commended.

You will probably flame my post now I said that

@Swerv13, oh c'mon, you got me all wrong. I was asking what bespokes means. And, giving example with this arosa bespoke bumpers. I see the word 'bespoke' a lot. Got me dude?

And, 'bespoke bumpers move like this set'? They move? Mind explain?

This car is so amazing... It embodies everything I love about DIY racing... The small car that corners like a demon... It's the exact approach that I am going for with my Suzuki Reno(USDM)/Chevy Lacetti(UK). It's not something you see raced all the time, which makes it more interesting, and it's probably a very cheap car to maintain... It's built for the straight up fun... This is my favorite car you guys have made a post about... Sweet Build Ian!!!

Thanks for all the comments guys, it's great to find your hard work is understood - and appreciated! The actual weight of the car is 890Kg (not the 980kg stated in the article).. which may help explain things!

There's a few lap videos on YouTube, with the latest being:

I hope to get a better quality, clearer lap video sorted in June.