Here is another selection of wild rides from the Exciting Car Showdown. The black & white opening shot above is of the Saurus DR30 Skyline, winner of the JDDA 10-second class. This car comes from an era before the RB-series of engines, so it is powered by the old FJ20DET 4-cylinder lump. It has been stroked to 2.4L via an OS Giken kit and is blown by a Trust T88-33D-15 turbine, which allows it to develop an impressive 756 PS and a healthy 82 kgm of torque at a pretty high 6,050 rpm. As you can imagine this car is pretty fast in a straight line, recording a 330 km/h top speed on a recent Option Magazine story (may-2009 issue).

From the R30 onto something a little more modern, the "Wild & Low Wild Chop Top" S15 Silvia (it's mouthful isn't it!). The front windscreen remains the same size but the pillars have been bent backwards to create the new roofline, while a good portion of metal was cut away to connect the whole thing up.

On top of the chopped roof, this S15 puts down 600 PS to the rear wheels thanks to the 1JZ swap!

And on the subject of engine swaps check out this KGC10 Hakosuka built by the guys at C&Y.

The super-clean exterior is complimented by an impressive engine conversion, thanks to an individually throttled 2JZ-GE pushing out 230 PS. This build is all about character and with this NA 2JZ this Skyline must have plenty of it. Another to add to "must-hear list!"

Being an R34 owner I had to post some pictures of the mighty GT-R, and this one from Final Motion was looking very special with its carbon-Kevlar front end. Thanks to Tomei internals and a TD07 turbine this san-yon was built for response, but still manages to put out 630 PS. You can't see it in this picture, but it also sports a side-exit wastegate dump-pipe, not exactly road-legal…

There were plenty of new GT-Rs too, and I'm happy to see that the aftermarket for the R35 is growing steadily. This is the Sunline Racing demo car fitted with their new carbon GT-wing.

Now don't laugh at this drift-spec Suzuki Carry Kei-truck that was on display in the Drift Tengoku area. Seriously! The owner and builder of this contraption has the right idea, as being a pick up there is hardly any weight over the rear wheels, perfect to get the tail out. To make sure there is enough power on tap the little K6A engine has been tuned to develop 100 PS.

Check out the massive silencer sticking out of the back, and the double wing spoiler. Ok now you can laugh!

So many cars at the show were painted in candy orange like this Origin S13.  Don't know why, but a drift car in orange, just looks sooo right.

I couldn't keep my eyes off this turbocharged NA6CE Roadster with its ground-hugging aero and low-mounted GT wing.  The 15-inch BigEnd Barrel wheels have a very aggressive offset at the rear, but IMO could be pushed out a bit more up front.  Not often you see a Roadster built for drifting.

My friend is building an S14.5 and thinking of painting it Bayside Blue.  This one built by Origin and painted by Glass Factory should give him a good idea of how his own Silvia might look.  The marble effect on the hood was pretty impressive.

And getting back to conversions, I thought this C35 Laurel looked really cool with an ER34 Skyline front end. Hinting at the Skyline connection is the Midnight Purple II paint job.

Yep that is an SR20 in an FD3S, probably a lot more reliable than a buzzing Wankel (the rotor heads will kill me for saying that LOL!). This drift RX-7 is built by Real Engineering and Auto Shop Phoenix and was first shown at the 2005 Tokyo Auto Salon.

There were some more track oriented cars too at the Exciting Car Showdown like this HKS Kansai Service GRB STi Impreza. Same car we saw in January at TAS, still wearing the matte finish Seibon carbon hood. Looking forward to seeing this thing blasting around Tsukuba at this Sunday's Hyper Challenge. Plenty of action coming from that event soon!

TVR or RX-7? I don't care what people say, but I think this Fujita Engineering FD looks so right with these headlights.  What do you guys think?  FDs look sweet with any light conversion I guess!  Next up, a look at the drift cars from the show, after all April is Drift Month here at Speedunters! 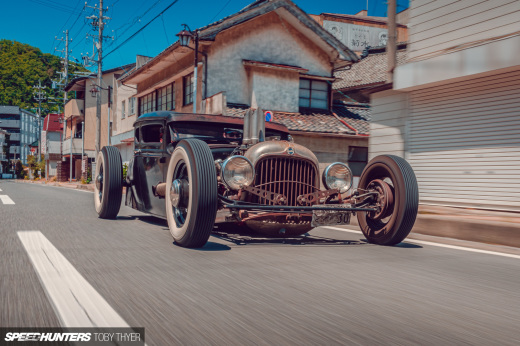 YOu need better pics and more of them in your coverages.

The TVRX-7 is pretty cool. Have the look of the futuristic-concept cars designed in the 90s!

YOu need to shut up Evan

Evan, I aim to please so I would appreciate if you could elaborate on your post? I will be uploading at least 3 more posts from the Nagoya show,so the coverage is far from over.

I would have to disagree about the Kei Truck being just right for drifting. having no weight over the rear wheels is almost worse than having too much.

Kill me for saying this but the chop top s15 almost look like a NASCAR with that paint job and the numbers at the side. Also, the Final Motion R34 looks sick! Wonder how light the carbon-kevlar body is compared to the normal CF. Hehe, if you don't mind requests Dino could you post more photos of Daijiro Inada's S13, the conversion does look more interesting than his V35 Skyline conversion....

C.B.Leslie (DL)...when you only have 100PS to drift with I think the less the weight out back the better, no?

There was a low-chop top S15 by DRFT in D1GP ages ago right? Is it the same chassis? o.O

2 Nissans with JZ, Mazda with SR swapped, low-chop top S15, C35 with ER34 front end, TVRX7 in this post..Japanese like something extraordinary heaps..

It's great that next coverage would be about drift cars..so excited for it..

still feel bad about the engine swaps with toyota in nissans etc..

Sweet pics. Who makes the wheels on the Miata? BigEnd Barrel wheels?? Love them. Are they still produced?

I remember seeing that SR20 RX7 on an old drift tengoku video (a special SR20DET swapp), the suspension setup was terrible (in a bad way).

Also if you took some pics of that yellow JZX on the 8th pic it would be nice to post em coz the paint look nice.

Dino, do you have anymore pictures of the red Chaser behind the golden FC?

nice DR30 skyline! was that speed recorded on a track or wangan? does option even do wangan nowadays? =)

all this cars at the show are really amazing, nice work man, i envy u , wish i could be down there too

all this cars at the show are really amazing, nice work man, i envy u , wish i could be down there too

"the rotor heads will kill me for saying that LOL!"

Love the KGC10 but, being a Nissan, but in my opinion it should retain a Nissan engine. I'm not too keen on the bastardization engine-chassis swap. I'd rather see a KCG10 with a SR20DET instead....mild hp, that's all it takes.

We all know Seibon steal designs of hoods and aero parts from well known companies (such as Voltex, Spoon, ASM.....).....so why doing business with them? Kansai made a bad move sporting their hood.

This trend is popular lately in Japan, to run American stuff (made in China shit)......I don't get it.

that NA6 roadster is way to badass

awesome coverage dino. did you get any pics of the FJ20 in the R30? i would love to see it

Anymore details on the NA6, Dino? That car looks amazing. I'd love to know more about it.

yay lets get some more pictures of that na/6=)

Holy cool Roadster.... know what aero that is??

I wonder if the manifold for the NA 2JZ is available. Anyone know? It looks like it uses 4AGE ITBs. I've got six of them ready to go, but I need a manifold.

What the hell is HKS Kansai doing with a Seibon hood? Perhaps Seibon offered some sponsorship in this tough economic climate...

Dino could you tell me where C&Y is located in Japan. I will be moving there next year and I was thinking about a sick build and I think these guys might be able to help me. Thanks.

The DR30 is exceptional. I'd love to see more of it!