Anyone who says that a minivan can't be cool has probably never seen the Japan market Honda Odyssey. Unlike the US-spec Odyssey which is big, boxy thing, the JDM version is a sleek vehicle that looks more like a wagon than a van. Even though the previous version still looked modern to most, it has already been on the market for several years and Honda has just unveiled the redesigned Japan market Odyssey. Based on the popularity of the outgoing model, Honda kept the changes "evolutionary" instead of drastically altering the proven design.

As you can see, the overall shape remains the same. Major changes include a redesigned front end that includes new headlights and a larger front grill that falls in line with other recent Honda vehicles. The front and rear fenders are also more pronounced on the new model.Like a car, the Odyssey has traditional doors instead of van-like sliding doors.

Isn't that downtown LA in the background of this photo? I find it funny how JDM car ads always show the cars in the US even if they aren't sold there. In this shot you can also see the rear end with the new taillights and the
dual-tipped exhaust. A 173ps DOHC four cylinder is standard with a
202ps version available in the top grade "Absolute" model.

Just like the outgoing model, the new Ody has a futuristic interior with enough available features to rival a Lexus. "Luxury" items like HID headlights and navigation are available in just about every car sold in Japan, including the tiniest kei cars.

Not surprisingly, Mugen has already introduced a full line of tuning parts for the new Odyssey including aero, suspension, and exhaust.

As of now, the new Odyssey will stay a JDM model. but I have heard rumors that Honda may start exporting it to other markets like the United States within the next couple years.

I know I would rock one of these as daily driver, what about you? 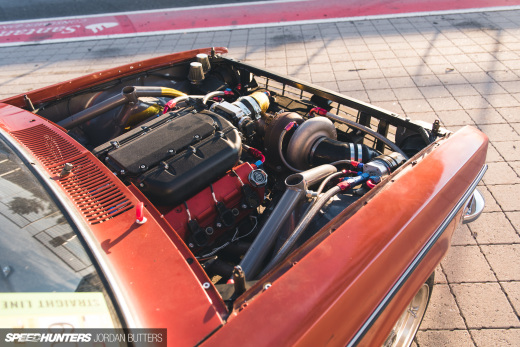 I'd only make it my daily driver if it was RWD like my 1993 GMC Safari that I used to powerslide back in high school. hahaha

im a huge fan of jdm vans, hope they decide to sell in the US. The vanning scene needs something new here

The only Minivan I"ve ever really liked was the Renault Espace F1 .... LOL

i like it, but the mugen grille is not to my taste... hehe.. also, i like the new front wings a lot, but the rear quarter-panels are perhaps too much in the way of snake hips, they could stand to be a touch closer to the body.

all-in-all though i approve! the JDM odyssey has always been something to admire, especially compared to its cognate brother in north america

i'd rock it...i can't wait to see what the VIP shops will do to it! that van with that dark plum color would look so sick slammed with a nice vip kit on it. ::yummy::

Jesus...seriously this sight is rocking shit like this? Is this turning into Car and Driver? Less of this, more of actual sports cars and tha special shit that makes your dookie twinkle like a crack rock after a night of partying

Spish the point of this post is that seeing vans like this on roads here in North America would be a helluva lot better than the crap on the roads now. Any anyway nobody's forcing you to follow this site lol