The 2023 Tokyo Auto Salon is all go, and if you caught my preview post this morning you’ll know that modified versions of Nissan’s new Z are – as expected – on show in numbers. One of the most anticipated RZ34 builds belongs to VeilSide.

Knowing how cool this car was going to be (Yokomaku-san teased us with plenty of progress shots late last year) I made a plan to visit VeilSide ahead of TAS and take a proper look.

Luckily for me, there was no last-second ‘TAS crunch’ dash to the finish line; Yokomaku-san had the car completed right on schedule, meaning there were a few days for me to get it shot at VeilSide HQ before it was transported to the Makuhari Messe.

So here it is, the VeilSide FFZ400 – ‘FF’ likely to be an acronym of the Fast and the Furious. There’s history, remember.

Nissan’s new Z has well and truly been given the VeilSide treatment, and it all came together in the space of just two months.

The classic VeilSide elements are all very much here, starting at the front with an elongated bumper that makes the car look like it’s going 300km/h down the Wangan even when it’s parked up. The stock grille has been integrated into the design and is joined by four additional openings on the splitter portion of the new bumper with even larger grilled-off intakes in between.

The choice to go orange could be a tip of the hat to the 432R race version of the S30 Fairlady Z that was only sold in Japan, but since Yokomaku-san is also calling the car “Han’s 400Z” we’ll let you decide where the color inspiration came from. Coincidentally, Nismo has also chosen to go with a similar orange hue for their RZ34 demo car.

One detail that Yokomaku spent time refining is the area around the headlights. He really wanted to emphasize the lights’ shape, so added some sharp body lines in the area to achieve it.

The fenders also feature a contrasting vented addition comprised of a series of louvers that flow into the main vent detail.

Signature 5-spoke VeilSide wheels in a 20-inch fitment sit deep into the slightly widened fenders thanks to air suspension.

Because there’s nothing like hitting a button to achieve that perfect stance.

Yokomaku really likes the subtle S30 nod in the center of the hood, and has highlighted this Z-specific design detail in a unique way.

The hard part of any project like this is making sure that it all flows together, so there is coherent and evident design language.

There’s little point in crafting an aggressive front bumper design and then leaving the rear stock.

As we progress down the side profile, the skirts really help pull the whole look together.

Unlike VeilSide’s A90 Supra, the Z’s rear fenders have been left uncut, meaning what looks like a proper overfender is actually an FRP add-on applied over the original fender. Yokomaku thinks that most RZ34 owners won’t be keen on someone taking a grinder to their new purchase, so this solution gets you the look, but still keeps all the factory metal in place.

That said, the increase in width is still nicely achieved, with more than enough room for some decent rear rubber.

The entire fender piece then beautifully flows into an elongated ducktail spoiler with definite drag vibes. The fading VeilSide logos on the wing stays are a nice touch.

When Nissan unveiled the new Z in 2020, it stated that the accent piece along the roofline was inspired by the blade of a katana (samurai sword). To highlight this design element, Yokomaku gave the piece a typical hamon pattern – the wavy line that outlines the hardened section of a sword.

In typical VeilSide fashion, the interior has been given a few basic touches to give it a bespoke feel.

First up we have a set of Bride seats that were custom-made especially for this project.

To tie it into the rest of the cabin, the same fabric has been used on the door cards…

And the steering wheel center. It really elevates the cabin’s feel while retaining the factory black scheme.

At the time of shooting, the Z had just 12km on the odometer. Yokomaku told me that it was picked up from the Nissan dealer on a flatbed truck back in October, and immediately positioned in the workshop for the body-sculpting work to begin.

Up front we have six cylinders of course. The V6 twin-turbo VR30DETT has been left in its stock state, as performance tuning is not something VeilSide specializes in these days.

While the drag racing and high-speed trials of the ’80s and ’90s shaped Yokomaku’s past, the future of VeilSide is all about design.

VeilSide will, however, sell you their own exhaust system. Primarily because it’s a styling cue, but also because the stock Z is just way too quiet from factory.

As I was finishing off the shoot, Yokomaku-san also grabbed some quick shots of the car, stating it was the first time he had seen it outside.

The 2023 Tokyo Auto Salon halls might be filled with amazing Zs in all flavors, but for me, this one’s extra special.

The Tokyo Auto Salon on Speedhunters

I like the ear looking "tabs" on the rear spoiler, reminds me of the Pajero Evo.

only redeeming part of this car. I like it too

Meh. Yet another bagged new Z. Those exhaust tips look like cookie-cutters...

Another disappointment from veilside. It's neither cool or functional. Double loss.

I've never really associated Veilside with 'functional'. They never really focused on aerodynamics like some other Japanese kit manufactures, but have always been a more stylized expression company. In that regard, this one is actually pretty nice to look at.
I honestly think this is one of their best design in recent years. It doesn't look like 12 different ideas smashed into one like the supra, but rather like one cohesive design. The lines and profiles flow well from most angles, which is hard to do. I do think it would look better with the rear flares grafted in since it looks a little odd with rivets only on the back, especially with the rest of the cars smoother lines. That's a personal preference and not how most would install it though, so I understand the decision to not do so on the demo car.

But name another car company with the design sense to run deep-dish wheels.

I was and am a huge fan of the white Supra. In another colour it might be overwrought, but as presented it was exceptionally well designed. One of my favourite body kit designs ever, and certainly in the top of the last 5-8 years.
I think the 400Z was a weak design from factory. This car, OTOH, looks fully built, in a contemporary style.
Actually a bit retro in a few concepts tried on it.
Front the front 1/4 it looks a bit like the last F/R Corvette (c7, iirc)
The front fender vent is a great idea, with middling execution.
The black bits stuck in front of each wheel have absolutely got to go. Fortunately, I can see ordering a kit less those parts (though wouldn't you still want *some* rocker decor/buildup to keep things cohesive?).
Rear fenders look terrific at this height. Might look a little awkward at stock height?
Faux hood scoop is another decent idea that isn't executed well. Not sure how to fix that. paint body tone? Really it needs the center raised 40mm or more to "work" well.

for a product from a company as historic as VeilSide... You'd expect the fitment/gaps between the front bumper and hood to be a little better?

yeah. Though do 95% of people who pop for bodykits actually care about panel fit? I don't think so.

Trying to tell from the pics if the bumper is actually dimensionally wrong? or if it's a fit up problem. Unfortunately looks like it's misdimensioned. If you pulled the corners down tight by the headlights, it would be contacting there and you'd still have the gap in the center. So the curve is ever so slightly wrong.
Or, more likely, the bumper is a few (only takes 2-4) millimeters wide overall and to pin it in place it had to be forced into position on the corners, creating a bow in the center.

I have no idea what happened, they used to be THE guys to get the goods from. I wish they'd return to performance, this cosmetic nonsense has to end asap

Still need to see what the others have ito offer but i think this body kit will be popular.
On a side note, 20" are a little bit over the limit. It looks like it's wearing its big brother's shoes; hope we won't get to the dad's shoes style.

I hated the 90's Veilside look of the MR2s and Supras but must admit, I really like the styling of this. Sounds like I'm the only one!

Good now the original speed record can be broken

now the original dude can afford to replace his car :3 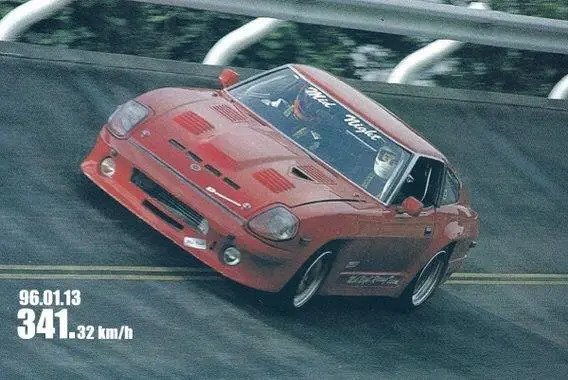 ABR build there own Bodykits back in the day, so I doubt they would buy parts from there past competitiors

This is Veilside? Fitment looks like typical replica nonsense. It's attrocious.

But, in the way so much of the current car culture is, so many people will explain it as "fine", "good fit", "dope frfr". Very few chase excellence, and so we are left to wallow in mediocrity. It's sad to see Veilside go down that path and accept good enough. It should be aborted.

It looks like a car Han would have driven, too bad they couldn’t get him to drive it into the show.

Good looking car. I even don't mind that it's on bags, which is kind of a shock for me.

That is a beautiful shade of orange. Does it have a name?

had to look up F12 TDF, and wow.... definitely where the origin for this was... pretty plainly a "crib". Still a design stands on its own, and for the most part this "works"

This looks amazing. Idk what you guys are on about, but this is an exciting car to behold.

Happy to see Veilside still kicking, the Z really does look good in that orange. Wheels seem a bit big but that’s the Veilside style and can’t argue with it one bit. All that’s left to wonder is what other people will do with their own Veilsides..