The Z32 Nissan 300ZX is an interesting car. Laden with tech from the factory, it was marketed as an attainable supercar alternative and, based on the success of previous Z models stateside, aimed at US buyers.

More than 30 years after its debut, the Z32 still enjoys a loyal following around the world, and its design has survived the test of time. The same can be said of the A80 MkIV Toyota Supra which, thanks in most part to its 2JZ-GTE engine, is another Japanese performance car icon. Imagine then, combining the best parts of each car. Jesse Laaksonen from Finland doesn’t need to; he’s already done it – and then some – with his ‘Zupra’ build.

Thanks to a father who tuned and drag raced cars, Jesse became fascinated in the automotive hobby from a young age. In 2019, this 1995 300ZX – a USDM model that had been exported to Finland a decade prior – became Jesse’s first car. Back then it was still powered by its original VG30DETT engine, and the thought of swapping it out, let alone going crazy with other modifications around the car hadn’t even crossed Jesse’s mind. But that thinking didn’t last long.

Around a year into the project, Jesse started researching the 2JZ platform and the swap process. Soon after, the Nissan was beating to the sound of a Toyota drum.

Before it was fitted in the Z32, the 2JZ-GTE received a new set of bearings and the factory twin-turbos were ditched in favor of a big single Holset hybrid unit. But Jesse only got as far as the first dyno session before the engine came back out for a proper refresh. It now features an upgraded crankshaft and forged pistons and rods, plus billet main caps.

Once the mechanical aspect of the rebuild was complete, Jesse turned his attention to the 300ZX’s appearance. Rocket Bunny S13 over-fenders were purchased and re-molded for the Z, and deep-dish 18-inch Weds Kranze LXZ wheels were fitted up.

At this point, Jesse thought that the build was headed in the right direction, but felt like the exterior still needed some extra aggression. A GReddy front bumper and Bomex side skirts were acquired and fitted, the latter receiving some custom details from a local carbon fiber specialist. Finally, the steel and FRP bodywork was painted in a custom Midnight Purple hue with big metallic flakes for some extra sparkle.

The aero-look was completed with a massive custom rear wing and my favorite small touch, Aerowolf mirror visors.

To pull the whole look together, Jesse wanted to be able to drop the Z on the ground. A set of coilovers together with a Stanceparts air cup lift system allows the car to ride low, but also be raised up by 50mm at the touch of a button when required.

The modifications continue inside the cabin with carbon fiber Bride Gias II seats and sought-after Willans x Nightrunner 4-point harnesses. The steering wheel is a Likewise Hellboi item and behind that sits an AiM MXG dash display.

Currently, the 2JZ delivers almost 600hp to the Z’s rear wheels, but in the future Jesse wants to reach the magical 1,000whp mark. He says that the car is best described by its appearance, but the mean and low look is not only for show. Jesse doesn’t hesitate to hit the track from time to time, and the Z is still versatile enough to drive to the shops. What more could you ask for? 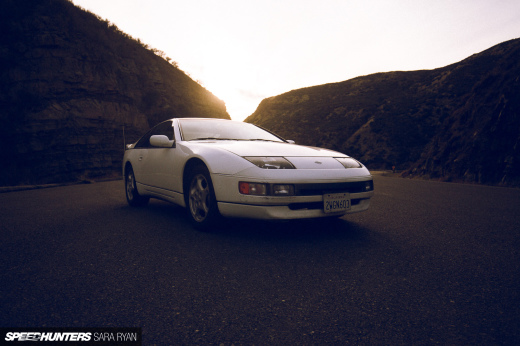 That purple colour is simply wonderful!

Love the idea. Dislike the colour, lol. Though is does take me back to the old Gran Turismo days! (purple in general on the nissans). Still, probably one of my top 3 or 4 favourite JDM chassis'.

Not fan fan of thi chassis and i think i'll never will but i'm here to appreciate the level of fitment/finish.
Ah, and the best part of the built: SCANIA.

Yeah, the turbo is mix-mash of parts!

Finally a really cool car. Even if the wheels are a little big and the aero is goofy, it's hella cool. Did he build it all himself?

Yeah, everything was done himself or with help of friends.

amazing. Proud of him

600 hp and still on stock brakes and rotors? Plus he's looking to up it to 1000 hp. Dude needs to put some money on stopping power.

Agree, there should be an upgrade in that part