Waiting for the call that Project Rough was ready to pick up from R31 House, where I’d left it to be given some very special modifications, has been akin to when I was a kid, counting down the days til Santa Claus came sliding down the chimney with some gifts in tow.

But unlike December 25, there wasn’t a scheduled day that I could count down to. As with everything Shibata-san at R31 House puts his name to, only absolutely perfection would do, and there’s no minimum or maximum time limit for that. And of course, I definitely wasn’t going to try and rush the process.

But, I think that not knowing when the car would be done, actually made the time pass by quicker. Because before I knew it, I was headed back to Gifu to pick up my Skyline and, for the very first time, experience what Shibata-san calls the “perfect” RB25 sound.

Even though the R31 House team had kept me up to date with photos as the build progressed, I still hadn’t heard what Project Rough sounded like. No surprise then that I was dying to hear it.

When I arrived at R31 House, I found my car up in air alongside Shibata-san’s own R31 (stay tuned for a feature on this) so I could see exactly what had been changed to achieve the perfect sound. To explain the order of importance with the parts, Shibata has what he calls the ’70/10/10/10 rule’.

To achieve 70% perfection, the takoashi manifold is required. It’s not surprising to hear that the bulk of the heavy lifting comes from this part alone.

We talked a little bit about the importance of the turbocharger when it comes to sound in the last Project Rough update, but I was a little surprised to learn that its importance only came in at 10%.

Sound aside though, the smaller-sized turbo now fitted means Project Rough has more power down low and in the middle of the rev range, which is right where I need it for the sort of driving I generally do.

The remaining 10% plus 10% comes from a less-restrictive sports catalytic converter and a custom cat-back exhaust. The Kakimoto Racing and R31 House collaboration exhaust adds that final percentage that Shibata-san deems necessary for perfection.

Another added bonus was the massive weight savings found with the new exhaust system. The old setup was Japanese aftermarket but of an unknown origin (like many things that have been changed out in the car over the years) and weighed in at a hefty 35kg (77lb). I forgot to ask Shibata-san to weigh the new system, but a conservative figure would put it at around 15kg (33lb).

So what does it all add up to?

Although I perhaps went a little over the top in the video to demonstrate how beautiful Project Rough now sounds, to truly appreciate everything requires you to experience it from within.

With the boost now kicking in almost 2,000rpm sooner than it previously did thanks to the smaller turbocharger, the acceleration forces harmonize with the combined sound of the RB straight-six and turbocharger, creating an experience that continues to produce a mile-wild smile across my face every time I drive the car.

I’ve always said Project Rough is a fun car to drive, but something always felt like it was missing. Now I know that that ‘something’ was the complete R31 House Premium Sound exhaust.

Best of all, my two-year-old son now runs around the house screaming “Dadda’s car go baawWAAAAA! I’m dadda’s Skyline in a tunnel!” So that means Project Rough is the best car in the world.

Nevertheless, there are still many ideas in my head for Project Rough… 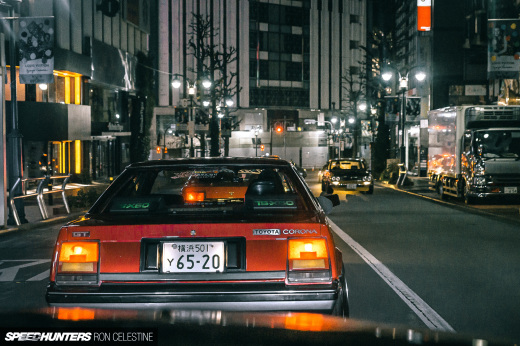 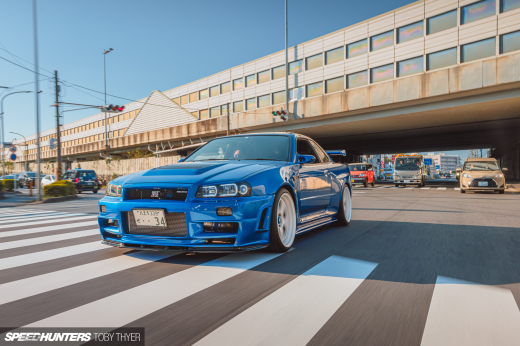 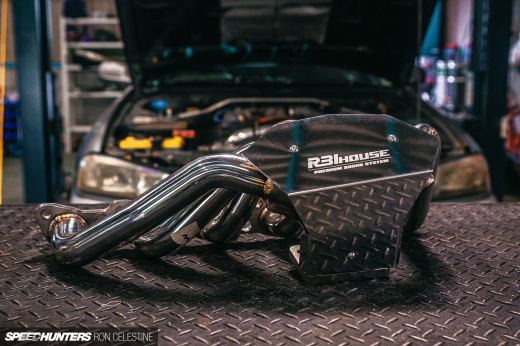 Lol glad the article was still to your approval

Sounds more like an RB26 now with the higher pitch!

Ironically, Shibata said this same combination on an RB26 sounds bad lol. Tried asking him more details about it but just said it wasn't good

Taking my car anywhere for anything here in the states I’m wanting to feel confident that the person doing the work will do a good job, I usually walk away left with the previous commenter’s comment of meh. I wish I could be you for a day, to know, to have that confidence and anticipation. The sound was perfect. To be around someone like that, to know someone you can just leave your car with is a gift.

100% agree with you...
We, who value car (independently of type, engine, shape or colour), know that it's price, figures, or anything material, but passion.
Before leaving my car in any shop, I always go to meet the one in charge to see if he/she will take care as the same way it was their own car. I had too many regrets pursing the "best" deal...

know that it's *not* price, figures, or anything material, but passion.

You know what.. I didn't even think about it like that. I didn't do much to my own cars back State side and when I did, I was fortune to have friends / some kind of connection where I wasn't thinking meh.. actually as I typed this I remember a time a shop crashed my car in the fence reversing out of the pit ( repressed memories)

It definitely is a blessing

Should add a disclaimer to video..."put on headphones and turn volume up" =P

Fits the build nicely. Muscular enough but not over the top loud

Hahaha that would have been a good idea

And yes! Has to be a perfect balance of noise but not pissing off the neighborhood / wife haha.

Forget the neighbors...its the wifey you have to worry about

Hahaha see I like my little village that I live in. Everyone around me is basically up there in age and go to sleep super early so I'm not trying to be that guy. Plus Even I don't want to deal with that kind of loud all the time ( guess I'm old lol)

The video was awesome!!! Don't put yourself down about it, love that it's just noises under different loads... What mic setup and placement did you use?

Thank you! I'm glad you enjoyed it. I need to work a bit more with my mic setup in the future. I have a Zoom mic that I left in the car ( simulate the sounds you would actually here) and a lav mic on the camera for the exterior sounds. What I didn't realize was how different it sound from the outside then inside until one of the passes / go pro ( front bumper) . So if I was to do it again, I'd get the zoom to capture the sounds up front so you could hear the Induction and flutters better.

Really enjoying this series, i owned an ER34 sedan as well and this just brings back great memories. Keep them coming.

Thank you! Glad your enjoying the journey as well. Did you have to sell it or did something else catch your eyes at the time?

It was my "family" car at the time and it was at the point where it needed some work done. I knew that would lead me down the path of no return so i decided to sell it to someone that was happy to go down that path. Had it for 7 years though which is why your series has been great to keep up with. After i added the comment i started looking at old pics of it 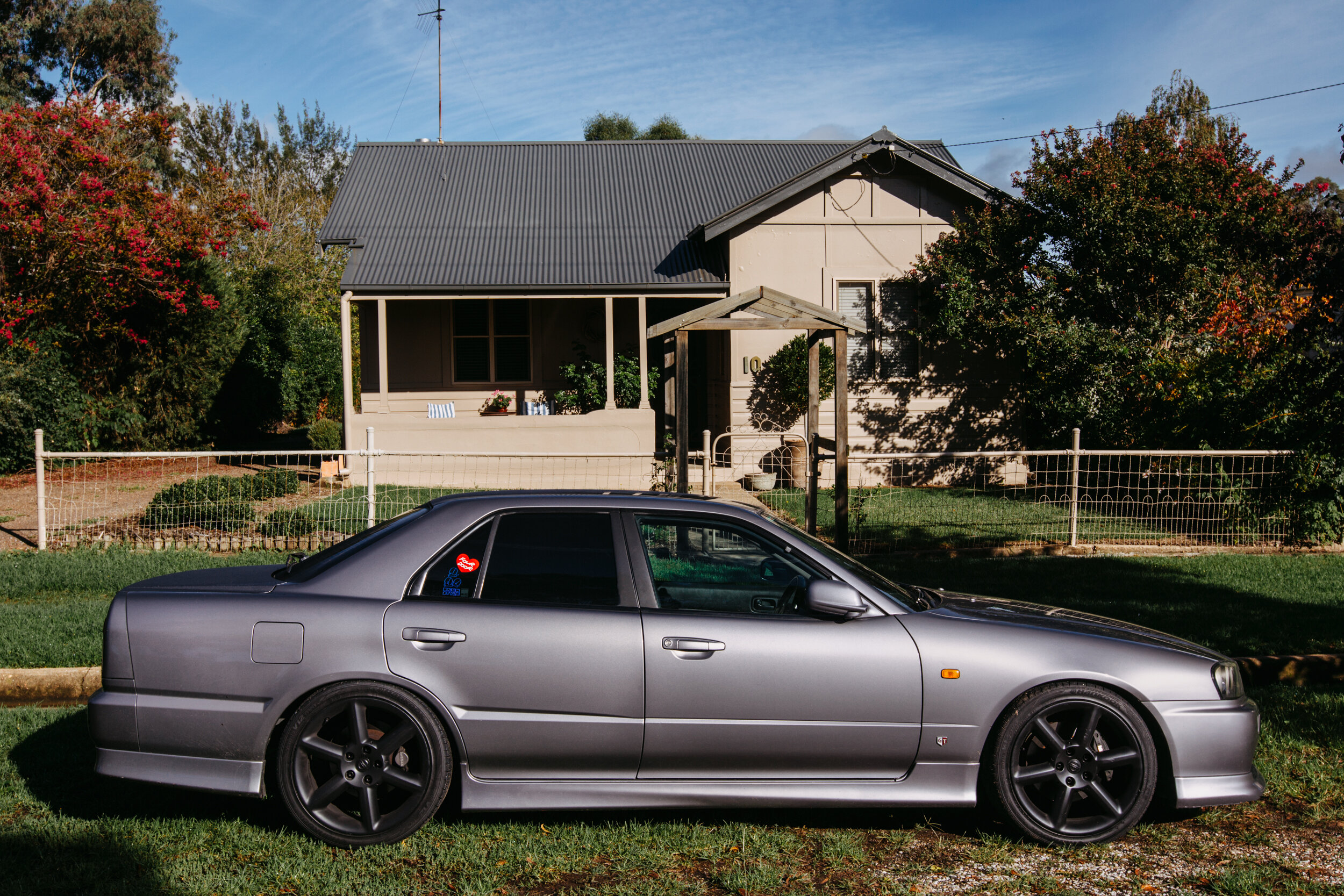 I would love this car to be my daily driver to and from work.

Hi Ron. Great article (both part 1 and part 2), After installing the exhaust system, what is next for Project Rough?

2 shots 1 bird here: you got me with the sound and the afro look (coming from someone who had to ditch the look for work safety reason).
As a mechanical engineer, i understand the need of evolution and revolution but as a human being i'm still not accepting the EV just because of the lack of the sound. Congrats man, enjoy the perfect system both power and harmonic sound wise.

She's a screamer but one the neighbors won't get annoyed about. Sounds perfect to my ears. Then again I am way beyond the large fart can years of tuning. LOL! If the kids and especially the wife is happy its a win win win!
Now time for that rusty spot on the trunk before it gobbles up the rear.

That's an exquisitely refined sound. The importance of a good sound can't be overstated. Love the attention to detail on this setup that took so much more than just slapping on an exhaust. It sounds incredible. And the 2 year old's approval, that's icing on the cake!