As always, there were countless amazing GT-Rs at this year’s R’s Meeting, and as a follow-up to my main event post, I thought I’d take a look at four personal standouts.

Where to start? With the GT-R that had everyone talking – the Built By Legends R33.

Like BBL’s R32 Skyline GT-R demo car, this build, a client commission, was a three-way collaboration between Garage Yoshida for the chassis prep and paint, Mine’s for the engine and mechanicals, and Built By Legends for the direction and fine details. But there was also input from the car’s US-based owner when it came to specifying some personal touches.

I’ll be diving into all that in the full feature we have planned once the car’s BNR34 Getrag 6-speed transmission has been fitted and matching propshaft made up, but I couldn’t wait to share some of the details.

For a start, the engine proudly displays the ‘MB7′ logo, which represents the Mine’s/BBL partnership and 7, the highest spec offered (there are three specifications to choose from – 3, 5 and 7). That means it runs HKS’s Step 3 Stroker Kit that increases capacity to 2.8L, a cylinder head processed at NAPREC to Mine’s specification, and a host of other upgrades that together see the engine perform with high response. The green finish on the valve cover and intake is another classic Mine’s touch.

The latter is carried through to the exterior, with a deep green tinge to the carbon fiber front lip spoiler and rear wing assembly.

You’ll also find the green touch applied to the interior, which has been upholstered in Alcantara across all the trim and dash.

The Recaro seats really pop in this fabric finish. It’s a modern look, but executed in an almost period-correct way.

The Mine’s flat-bottom steering wheel is a great finisher, but the thing that really hits home is the Mine’s cluster with an odometer that reads zero. It’s a visual reminder that this really is no longer a 25-year-old car; it’s been refreshed to such an extent that it’s better than how brand new R33 Skyline GT-Rs rolled off Nissan’s production line in 1997.

I also really like the custom-refinished RAYS Volk Racing 21As, which have a similar feel to the multi-spoke/mesh BBS wheels that Mine’s used back in the day. Behind the forged wheels sit AP Racing brakes to ensure the 600 or so ponies being generated under the hood can be reined in efficiently once they’re fully deployed.

This build is exactly what you expect it to be – a restomodded R33 GT-R put together by true legends in the game. What do you think?

Next up, we’re off to the Garage Mak booth for something quite different – an R32 GT-R packing almost twice the horsepower of the Built By Legends R33.

It’s doesn’t take much time looking under the hood to substantiate the power claim. Joining the fully-built motor is a jumbo HKS T51R and HKS’s V-Cam system, the latter a must-have for drivability and boost pickup when you’re running such a big turbo on the street.

Deleting the exhaust cam position sensor is slowly something I’m seeing more Japanese GT-R tuners do, even though Australian GT-R tuners have been doing it for well over a decade now. That sort of shows Japan’s reluctance to do things differently, but with companies like HKS offering their versions of proven modifications, things are changing.

Look a little closer and you’ll see that the T51R does have some extra help to wake up the mid-range a little quicker.

Move around the back and you can see where the nitrous oxide is stored, along with something else. Seeing the compressor, you might be forgiven for assuming that the car is running air suspension, but that’s not the case.

It all makes sense once you take a look in the cabin and see that the gear stick is missing.

The latest R35 GT-R steering wheel replaces the R32 unit, not so that Garage Mak could utilise the buttons, but rather because of the two shift paddles behind the spokes.

These control the air-shifted actuation of the OS Giken OS-88 6-speed sequential gearbox, which happens through a rather rudimentary rose-jointed rod that pops out from under the center console armrest.

It’s definitely a unique solution to using an old school sequential transmission with a modern style of shifting. And to be honest, it probably functions better than hand-actuating the OS box on up-shifts, as they’ve always required a solid pull on the lever to properly engage the next gear.

Another GT-R that caught my attention was one inspired by perhaps the most legendary Skyline race car of them all – the Taisan R32 that Keiichi Tsuchiya drove in the Japanese Gr.A championship when the model was new.

What you’re looking at is basically a road-going version of the race car, a way to bring the raw Group A feel, sound and performance to the street. The R32 is privately owned, but was pieced together by people who have worked with the GT-R platform for decades.

For example, the BNR34-based engine was built by an experienced mechanic at Reinik. It uses forged components within, but the capacity remains close to 2.6L.

This was a bare-chassis rebuild and runs a full bolt-in roll cage, not quite as extensively braced as the welded cage in the race car, but sure to provide some extra chassis rigidity.

To keep things period correct, analogue gauges are used throughout – a cool touch.

The ride height and combination of Nismo LMGT4 wheels wrapped in sticky Yokohama Advans keep the Group A vibes flowing.

Tsuchiya-san actually bumped into the GT-R’s owner while testing cars at Sodegaura earlier this year, and got a chance to do a few laps around the track. Have a look at the video above; Tsuchiya was seriously impressed at how authentic it felt and called the engine the “ultimate RB.”

To finish off, I think it’s only fitting that we give a little space to those shops out there that prefer to focus on aesthetics, like Rush Motor Sports from Gifu.

With so many shops out there now doing full wide-body carbon versions of older GT-Rs, it was only a matter of time before the same thinking was applied to the R35.

I love the color choice, a subtle tip of the hat to the Midnight Purple III used on the BNR34, albeit applied in a way that the underlying carbon fiber weave remains visible.

There’s still more from R’s Meeting to come, and in my final story I’ll be nerding out on some of the new GT-R tuning parts on display at the event. Stay tuned for that!

The R’s Meeting on Speedhunters

I loved the video of the street legal Group A R32 GTR. Tsuchiya's reaction while driving it was reminiscent of his reaction during the time he got behind the wheel of the Mines R34 GTR 20 yrs ago. There's another vid where he and Hoshino-san drive this same R32 that's pretty interesting.

Yeah saw that one as well. Amazing car

Thank you so much dino! cannot wait for more gtr content!

GarageMak R32 is one of my favs, hopefully I get to visit them shortly

I need to go for a ride in that thing!!

The pneumatic sequential is epic, the R35 corbon midnight purple is epic, but that R33 made me weak at the knees (coming from someone who'll pick an R32 over any other model of GT-Rs any day but can make exception this time).

It's nice uh. They all are in their own way

Thank you Dino, looking forward for the next articles.
I think fell in love with the BBL's R33!

Check out this one me and my buddy saw at cars and coffee in Virginia. Neighbor had one. Sold it for $40K. 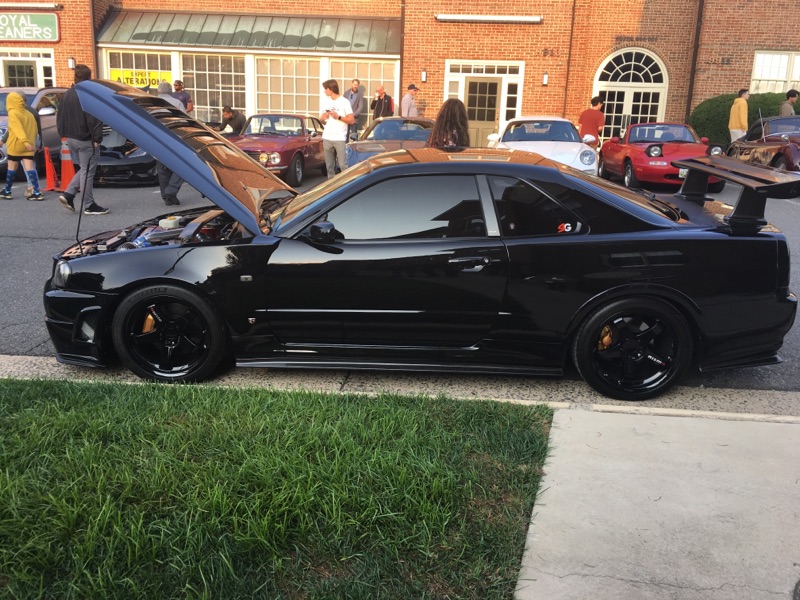 That's a mean looking one! Love black on black when done well

For myself, I typically lean towards traditional. But the resto mod R33, Wow. Can’t fault

That R33 is perfect, great interior, exterior and power mods. Great article and photos as usual too!

Thanks, but the car deserves a proper shoot! Soon!

I love those 20 inch yokoama wheels.