The thrill of buying from an auction is hard to describe. You spend an age perusing the catalogue, take your time checking the car over, and then find your seat, waiting for the right moment to throw your hat into the ring once the lot comes up. A flurry of activity follows, and within a few minutes it’s all over. You’ve either won or lost.

The NEC Classic Motor Show has hosted Silverstone Auctions events for a number of years now, and the events have always attracted a myriad of cars (and bikes in a separate auction). Show-goers have the opportunity to look around the vehicles in detail, to either reaffirm their intention to bid or perhaps just do a spot of window shopping. As much as I wish it otherwise, I was firmly in the latter camp as I made my way the 100-plus cars up for auction at the NEC Birmingham this year.

With this in mind, I thought it would be fun to share some of my personal standouts from the ‘NEC Classic Motor Show Sale 2022′. With so many to choose from though, I had to set some criteria for my favourites: Each car had to be relevant to me – ideally being from the ’90s or 2000s era – and more than just an ordinary model. Let’s dig in…

The Pajero Evolution was designed to compete in the T2 production class of the Paris-Dakar Rally, but to do this Mitsubishi had to build some road-going homologation versions. Compared to the standard Pajero, the production Evolution’s double wishbone front and multi-link independent rear suspension was unique, but the defining feature has to be its wild, pumped-up bodywork.

All the effort that Mitsubishi put into this model paid off, when in 1998 the Pajero not only won the Dakar T1 class, but also placed 2nd, 3rd and 4th.

While the automatic transmission version was favoured for Dakar, this car is one of only 200 manuals out of the total 2,500 production run. Having slipped through the proverbial cracks in terms of desirability for years, Pajero Evolutions are now becoming more and more sought after. Time hasn’t been good to many of them though – rust is an issue – so it’s a shame Mitsubishi discontinued a whole lot of the model’s unique parts over a decade ago.

The Clio V6 should, by all accounts, not exist. How a mid-engined, rear-wheel drive variant of the humble front-engined, front-wheel drive Clio made it past the approval stage at Renault I do not know, but I applaud the designers and engineers’ efforts for getting it over the line.

A 3.0L V6 from the Renault Laguna – with some additional fettling – was wedged where the back seat should be, but it was the generously widened body that gave the car its incredible road presence. This is a Phase 2 version, which took onboard feedback from Phase 1 reviews and featured subtle tweaks to make the car less of a handful, while increasing engine power output from 230hp to 255hp.

Being such a low mileage car, it sold for an incredibly strong amount – more than I expected. It shows just how coveted these Clio V6s have become in recent years.

In a world where even run-of-the-mill, mundane cars make over 200 horsepower, 118hp doesn’t seem very appealing. But when the entire package weighs just 731kg (1,611lb), suddenly interests are piqued.

The Elise makes no excuses for being a pure driver-focused tool, with a lightweight fibreglass body, double wishbone independent suspension, rack and pinion steering and ventilated disc brakes all round. Much of this seems the norm nowadays, but when Lotus released the Series 1 Elise, it outperformed numerous other cars costing many times more.

Earlier this year, the Elise production – which spanned three generations – came to an end. While each generation is revered for the impact it had, the Series 1 remains the yardstick that all driver’s cars are measured against.

The 4C is to some degree, a spiritual successor to the Series 1 Elise. The model made automotive headlines for its carbon fibre monocoque chassis – something usually reserved for bonafide supercars – which was paired with a 1.7L turbo engine and dual-clutch transmission. Although it the 4C was a strong performer, in stock spec the Alfa faced stiff competition from the Porsche Cayman and ultimately received a lukewarm reception from motoring journalists.

Someone sought to resolve a number of those shortcomings in this particular car, with a bump in power thanks to an ECU tune and exhaust, along with KW coilovers, magnesium wheels, carbon seats and an aftermarket EPAS system fitted to the manual steering.

Take all of those enhancements supporting the 4C’s junior supercar looks and you’ve got a very competent driver’s car.

The 968 has forever existed in the shadow of the 911. Offering a front-engine, rear-drive layout with a transaxle gearbox and a near 50:50 weight distribution, you’d have thought buyers would have been lining up, but that never materialised and less than 13,000 cars were sold across the production run.

The Club Sport (or CS for short) was designed to attract the more driver-focused buyers, and Porsche achieved this by stripping out 50kg (110lb) of non-essential weight. The back seat, sound deadening and air-conditioning were removed, and the heavy stock front seats were replaced by a pair of lightweight Recaro buckets.

1,923 Club Sports were built over the model’s three-year production run, with none officially sold in America due to crash regulations.

Over the last decade, the demand for air-cooled Porsches has reached stratospheric levels, with events like Luftgekühlt only serving to further elevate the platform.

This 911 has been built as a homage to the 993 RS Club Sport, a car that nowadays fetches upwards of £300,000. This replica would make a great track car; it has a full roll cage, a pair of Recaro bucket seats with Sparco harnesses and, relatively speaking, is at the lower end of the air-cooled cost spectrum.

So hypothetically, at 1/5th the price, would this provide 1/5th the enjoyment of a genuine RS Club Sport, or more?  I’ll let you be the judge of that.

The sound of a Volkswagen Group VR6 engine is one unlike any other. With a narrow 15-degree angle vee that allowed for a single cylinder head to be used, it was also a creative engineering solution that saw it fitted to the Corrado and other VWs of the time.

Designed and built by Karmann Coachworks, the Corrado VR6 was a genuinely quick car when new, with 0-60 arriving in 6.7 seconds.

The Corrado VR6 was an instant hit with the motoring press, making up for the shortcomings of the G60 supercharged variant that preceded it. This particular example takes things a step further, having been fitted with a VW Motorsport VSR (Variables SaugRohr) inlet manifold. This dual-tract, variable-length manifold provides more low down torque and is incredibly rare.

The car even has a period-correct gearshift lock; a reminder of an era when joyriding was at an all-time high in the UK.

The cars I’ve shown you were only a fraction of what was on offer at the NEC Classic Motor Show Sale 2022. The full catalogue catered to all tastes and budgets, presenting a unique opportunity for both buyers and sellers.

You roll the dice to a degree in both instances; you could walk away with a bargain, or part with your car for less than hoped.

Buying could also come at a cost far greater than your original budget as emotions take over, the desire to own the vehicle in question growing ever stronger with each incremental bid. All it takes is for someone else to be equally as motivated.

I’ve shown you my favourites, now you can take a look at the auction list and let us know what your picks would be. 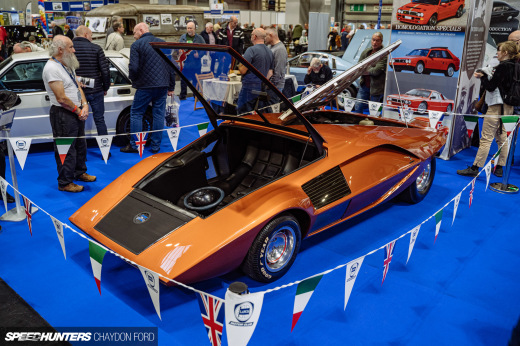 Lancia Stratos HF Zero: The Future, From The Past

The Clio V6 has long been a fave of mine since Gran Turismo, but the 599 GTO behind it... *drools*

What of untold you the 599 GTO sold for £25k LESS than the Clio?! It was definitely a bargain compared to the £250k list price when new.

That's a regular 599 GTB, not a GTO. An Omologato would be ten times the price.
Still good value though compared to the Clio!

I stand corrected! Should have double checked the results

HOW IS THAT EVEN POSSIBLE?!!

Wow, that is a bargain, as long as you can afford to run it. I seem to remember the running costs were eye-watering on a 599.

those alfa romeos are so gorgeous, if they gave them more power (quadrofoglio v6!!!!) they would have sold like hot cakes.
If they put in a v8 they would be insane

Oh man... so many cars that I've love to have in my dream garage...

CASUALLY GLOSSES OVER A 599

What a garage that whole line up would be... That rectified 4C! The spec on the 993! The clean on that Ford RS! Need to drive a S1 elise!

This article is why this website is bad for health.

Hard to choose just one, but if pressed, it would be the ex-Moss '65 S1 E-Type "semi-Lightweight" .