It might have only been my third time attending Ultrace in Poland, but it’s fair to say that I’ve become very fond of this annual event.

I love everything about Ultrace. The perfect location around a football stadium, the top quality streetwear collaborations, the ‘lowest’ drift cars, and finally seeing builds that I’ve admired online for years in person.

I landed in Wrocław at midday on Friday and headed straight to the event area. This was the setup day, and most of the participants were waiting for their set entry time near the gate.

There was only one problem – it was very hot. The weather app on my phone was showing 33°C (91.4°F) in the shade, so that’s where most people set themselves up. The heat was not only beaming down from the sun, but radiating up from the melting asphalt too.

I spent as much time as I could in the shade too, emerging every now and then to take in the show as it came together and get a feel for what 2022 had in store. It got to the point though, that I just couldn’t take the heat anymore. And with a thunderstorm on the horizon, I decided that it would be a much better idea to check in at my hotel and come back in the cooler evening.

As it turned out, the rain the cooled the air nicely, and when I returned later it was far more comfortable. By this time, at least 100 more cars had arrived onsite too.

The Ultrace organizers like to mix it up with the cars and always bring an interesting aspect to the show. This year it was a collection of classic John Player Special (JPS) and Jägermeister race cars. I teamed up with Alen to shoot these historically-significant race machines for a separate story, so look out for that.

I left the event setup on Friday night slightly worried though; there were a couple of advertised show-stoppers that were notable by their absence.

I needn’t have worried though, because one of the first sights that greeted me on Saturday morning was two trucks being unloaded with the cars I was really looking forward to checking out.

When I spotted the chin of the so-called ‘million-dollar Scirocco’ owned by Jason Whipple, I almost shed a tear. I love this car and consider it a modern work of automotive art.

Speaking of which, the Kustom Kolors E21 Group 5 machine looked like it had come straight from the iconic BMW Art Car collection.

By this time the gates were about to be opened to the public, and with a much milder temperature everything was coming together for a perfect day of Speedhunting. Or so I thought…

At last year’s event, spectator numbers were capped as Poland was still lifting Covid restrictions. This year, Ultrace was also sold out, but it quickly became apparent that the spectator number threshold was much higher that I had expected it to be.

I like to photograph cars at events with a long lens, but this was clearly going to be impossible amidst so many show-goers. Stance fans from all around Europe had flocked to one place to celebrate everything low on four wheels, and the atmosphere was wild.

Adrian Kapica, Ultrace’s CEO (in the yellow cap), ran the first event in 2010 when Poland’s stance scene was in its infancy. Just 15 or so cars showed up for that initial gathering.

Adrian himself says that blind faith took the event from what it was then to what it is today. It’s amazing that a small team of stance fans from a little city in Poland organize what is arguably Europe’s best custom car show.

Not able to get any clear shots of the cars because of the huge crowd, I concentrated on the details and walked plenty of circles around the 1980 Volkswagen Scirocco S. It’s time to tell you why I love it.

The artwork on the car was hand-painted by Ornamental Conifer, an artist in his own right and art director at Race Service, an automotive-centered creative agency in Los Angeles. With this special project, Ornamental has combined different styles, ranging from blurred typography to colorful abstract forms, making the car feel more dynamic. The messaging is important and should resonate with everyone.

The fact that the Scirocco is not a perfect show car makes me respect it even more. The owner races it, so the VW has scratches and other little imperfections all over. For me it’s the best way to show the actual character of the build. Oh yes, and let’s not forget it has a US-F3 engine under the hood.

Next to the VW was a very wide and very smooth 997 Porsche 911 created by Sebastien Polit. It’s not his first Ultrace rodeo; Sebastien previously wowed spectators with his static Dodge Viper GTS.

I continued to squeeze my way around the show area, snapping cool details and people.

One of those people was Khyzyl Saleem, an Ultrace regular.

It became apparent that in order to deliver a decent show report, I needed to come back on Sunday morning before the gates opened to the public. So I made my way over to the drift arena.

Fortunately, there was media access to the track, so I had a better view of Ultrace’s ‘Drift Matsuri’ and the people positioned above the action.

I enjoyed the drift sessions so much that I’m putting together a standalone story on this aspect of the event too.

The evening ended with the judges going through the venue and selecting the ‘Top 16′ finalists from the thousand or so cars on display. Given the quality at Ultrace, that can’t have been an easy task by any stretch.

As planned, I returned to the show early on Sunday where, apart from a couple of other photographers, the area was empty.

Trigger-happy, I quickly filled up the first memory card. The variety of cars was amazing, though Euro-style is particularly well represented at Ultrace.

That’s not to say Japanese cars didn’t get a look in, but amongst so many Euros they did feel slightly unique. Stay tuned for a gallery post of my favorites.

I continued walking around the stadium, finding cars I loved just for the way they looked, and others for the special stories behind them.

The photos tell the story of this Audi – 1,400hp and a full carbon chassis.

Continuing with the VAG theme is this Beetle by JP Performance. The fender extensions connect with aerodynamic flaps at the front and rear, making it look like a DTM body kit. The fender inlets are not used only for airflow, but house dual exhaust outlets on each side.

One trend I saw more of at this event was the increased use of forged carbon fiber. As an example, the silver Mercedes-AMG GT is a previous year’s car, while the black one is a fresh build for 2022.

And if you’re creative, you can do something like this.

From my photos thus far, you’ve probably noticed a few luxury cars in the main area. This Aston Martin is one that made it into the Top 16.

I spotted Adrian applying another ‘Top 16′ sticker to a worthy recipient, this time a Lancia Delta Integrale.

It was almost time for the gates to open, so I moved my legs a bit faster and kept the shutter count climbing.

The Chevrolet Corvette C3 that won Ultrace 2021 was also present, parked near a rather vicious Toyota Supra with swapped BMW V10 engine.

By the time the final day of the event was in full swing, I felt tired but satisfied. I still enjoyed the cars, but doing so while sitting on a bench with a cold beer in hand was rather nice.

The last few hours of the event before Ultrace’s overall winner was due to announced (after a tournament-style showdown between the five judges) went by pretty fast.

That car was this Mercedes-Benz Pullman built by Lownatics, one of Ultrace’s regular crews. I’m guessing the reason for the win was that it’s hard to get more street cred than with a lowered Pullman. I can live with the decision for sure.

After the awards, people started packing up and heading home, some with a lot further to travel than others.

I’ve got more stories from Ultrace 2022 coming up, and with those will be taking a closer look at some of my highlights. Right now though, I’ll let you enjoy the rest of the gallery below.

Raceism: The Best Car Show With The Most Questionable Name 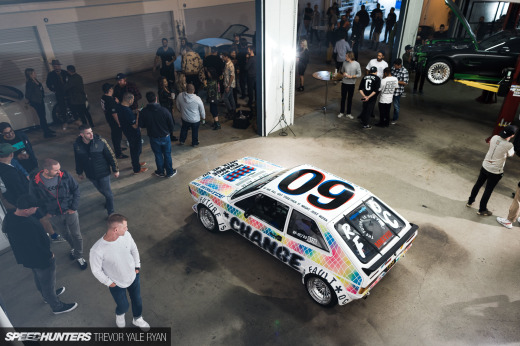 Spent all day yesterday going over the details of importing a Puma to California. Then you post this.

Pretty sure there is more to come for this red and white car in images 156-157.
And that scooter in image 150

if you told me there is another shot out there and i have to find it i would never guessed it. Any feature/spotlight conserning the car in question upcoming?

Unfortunately not, but a couple other awesome features are coming!

Glad to see some love for Kyza, one of my favorite render guys! (@the_kyza on IG)

That combination of 2x2 and forged carbon fiber is really intriguing...

Kyza is awesome, and a humble person as well!

Yes, correct on both fronts their mister

This show is RIDICULOUS!!!!! PLEASE do a full feature on the wide body white Porsche at the beginning. There are SO MANY amazing cars at this show. Simply mind-blowing!!!! That Lambo with the psychedelic paint job was crazy!!! Boy those folks over there REALLY got it going on! Fantastic pics!!!!

Lexy Roxx right? Regardless of her career, that's one cool looking Bull.

Gotta admire her passion and taste for cars.

Any additional photos of the coke cola cayman?

Some of these details are delicious.

anyone knows what car is this? 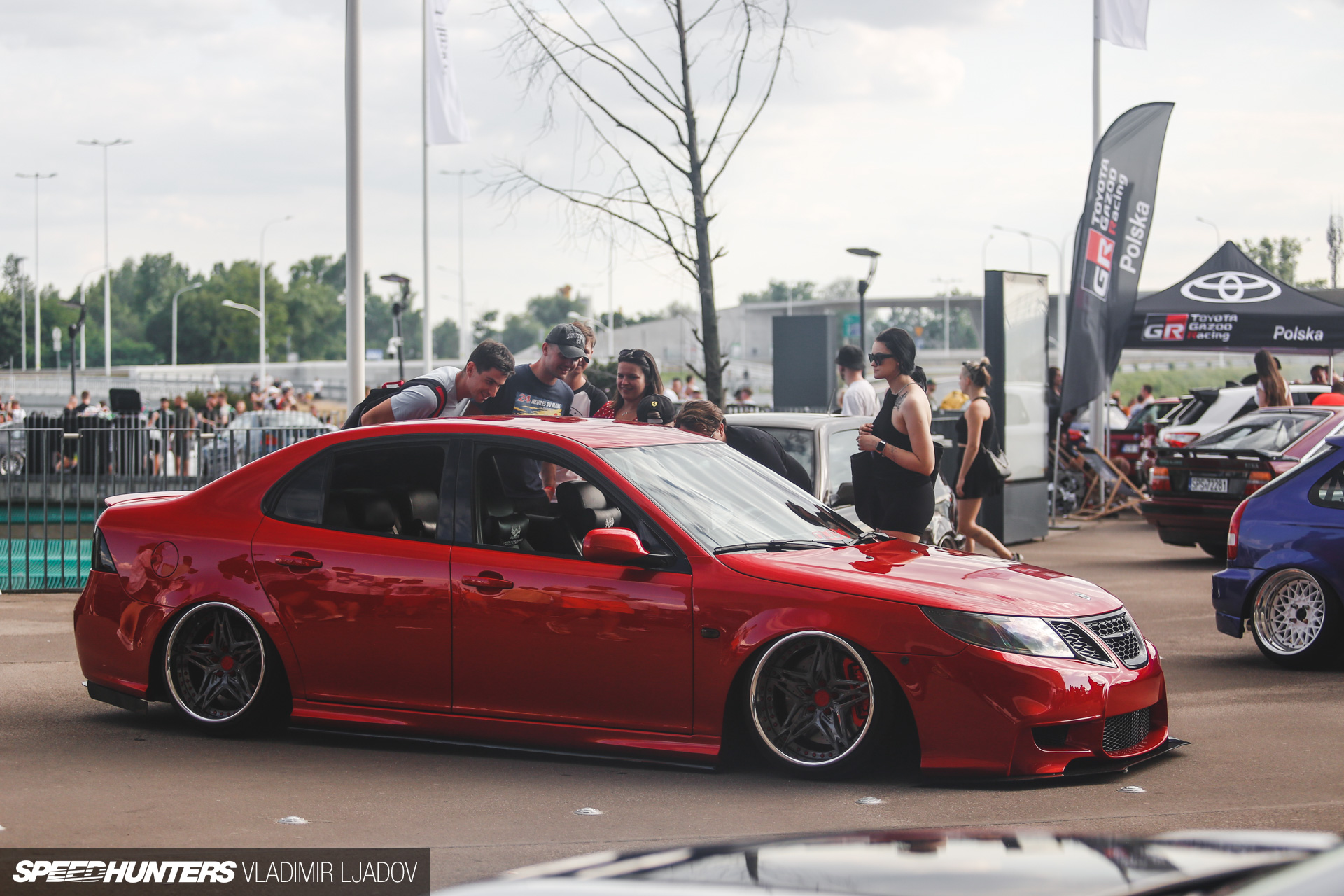 That yellow 911 of Sebastien's is so well done. I remember seeing his Viper on Stanceworks / Stancenation. His creative style is impeccable.

Yes, he worked on the Porsche for 2 years to make it when it's now!

Khyzyl Saleem - His artwork is awesome.

A little insight, he told me that he thinks that next year will be a big one for him at Ultrace.

I am very curious about that 1,400 hp Audi A3. Is it using the factory LMS race car wide body kit? And I count 6 coil plugs on the engine, so I assume it has a VR6 swap?

Yes he is using the facrory LMS bodykit

I love everything about Ultrace. The perfect location around a football stadium, the top quality streetwear collaborations, the ‘lowest’ drift cars, and finally seeing builds that I’ve admired online for years in person.
https://www.jobz.pk/opf-girls-college-rawalpindi-jobs-2022-for-teachers_jobs-494514.html

A fu*king Brazilian Puma! This version is rare even here... Kudos for the owner.

just the tip of that accord in the second to last picture...I want more

The photos tell the story of this Audi – 1,400hp and a full carbon chassis

Maybe you can give some info on this. By chassis, do you mean the unibody/frame of the car, to which the front & rear subframes are attached, is made of carbon fiber? Or, do you mean "chassis" as in the front and/or rear subframe of the car. Finally, I don't think that you meant the body kit, which is clearly carbon fiber. Any clarification is helpful. Even the builders website is murky on what a "full carbon chassis" actually means. I know we use different car terms around the world, but this i confusing to me.