I’d hazard a guess that anyone with an inkling of octane running through their veins has at the very least heard of the Goodwood Festival of Speed, or been fortunate enough to attend in person.

However, fewer of us would know how it first came to be. Motorsport on the Goodwood Estate ran from 1948 until 1963 at the circuit. In 1992, there was a desire to bring motorsport back to Goodwood, but rather than returning to the circuit (this happened a few years later in 1998) the idea was to run a hillclimb along the roadways within the estate.

Following discussions within the British Automobile Racing Club (BARC) of which the Duke of Richmond – whose family has occupied the Goodwood Estate for over 300 years – had recently been appointed president, the decision was made to host the first inaugural Goodwood Festival of Speed the following year. The sheep were moved, hay bales were placed, and a rudimentary start line gantry, commentary box and marques were set up on the section of driveway that passes right by Goodwood House.

That first year, 25,000 people were welcomed through the gates over the course of the event. The number has grown steadily over the last 29 years, to over 200,000 people now attending every summer.

With far too many motorsport-type events segregating the fans from the entrants and the machines, the Festival of Speed has always sought to remove that. The paddocks are all open and accessible, the hillclimb able to be viewed from dozens of vantage points, and the static displays and huge number of manufacturer and trade stands cater to all interests. With global motor shows in decline, the Festival of Speed is also now seen as one of the key events annually to reveal new models, with the added bonus of the hillclimb as a litmus test against competitors.

The featured marque this year was BMW, marking the 50th anniversary of M – BMW’s ‘Motorsport’ division. Gerry Judah has been responsible for the vision and creation of the Festival of Speed sculptures for a number of years, and this year’s central feature was no different. Using over 56 tonnes of steel, the creation displayed four historic BMW M cars and the 2024 BMW LMDh concept up to 36 meters in the air.

For those willing to take the hike up the hill (or the dusty and bumpy tractor ride), the rally stage is definitely a hidden gem. Not many venture to it, but those that do are rewarded with some of the most interesting cars of the event. The rally stage along with a slew of other features will follow.

Spread across multiple paddocks peppered around the event, cars and bikes from as early as 1903 up to 2023 models were lined up side by side. Ever wondered about the dash layout of a Peugeot 205 T16 Pikes Peak? Or what the underbody of a BMW M1 Procar looks like? The largely unrestricted access provided opportunities to answer these questions.

The Cartier Style Et Luxe contained some incredibly rare and well kept vehicles. Seeing one McLaren F1 in isolation is a special affair; seeing six of the eight in attendance parked up together totalling an estimated £100 million (!) is something else altogether.

Electric Avenue gave an insight into some of the EV-powered vehicles we can expect to see in production in the coming years, along with a few concepts. EVs featured quite heavily this year both on and off track and, while opinions will ultimately be divided around them, it’s not all doom and gloom for the future.

OEMs brought a myriad of cars to display, primarily new models and concepts.

Some paying homage to the cars of their past equally as well.

The aftermarket was also well represented, either in terms of retromods or outright modified vehicles. Singer’s Turbo Study and the Nardone Porsche 928 being incredibly well presented.

Lanzante brought a host modified of McLarens and one their Porsche 930 TAG Turbos, running a 1.5L turbocharged V6 plucked from an era-correct F1 car.

Always a crowd favourite, Travis Pastrana and Vermont SportsCar brought along their latest creation. A Subaru GL wagon in original trim would never generate much excitement, but when you add in a 800hp+ motor, active aero and the underpinnings of a Global RallyCross car, it gets a lot more interesting.

Drifting has become a staple of the event over the last few years, massively boosting its profile to the general public. While the Festival of Speed course isn’t ideal for sideways shenanigans, the drivers still put on a great show in the Driftkhana.

The hillclimb itself winds its way along 1.16 miles of the estate, and while it may seem relatively easy to drive seeing a topographical view, certain sections can be tricky. From the start line, a short straight allows entrants to build speed before the first corner, with some competitors electing for big, smokey burnouts instead of outright pace.

Another long right-hander follows and then its flat-out past the front of the house, ducking left under the pedestrian bridge.

A shallow left-right kink over a crest precedes Molecome, possibly the trickiest corner on the track due to the crest and drivers misjudging the braking point.

Some opt for a tight line, dropping a wheel on the inside into the dirt.

The track then gains a bit of elevation before the sharp right-hander into the longer left of the flint wall.

Rather than hugging the wall, most would err on the side of caution, avoiding the jagged brickwork which has claimed its fair share of composites and metal over the years.

Moments after having to adjust to the darkness of the flint wall and trees which hug either side, drivers are yet again confronted by bright sunlight for a medium speed right-hander, just touching the brakes before turning in. A final dash to the line ensues out of sight of spectators, accelerating down the short straight and long sweeping left-hand corner, before a sprint for the finish.

The Shootout on Sunday was one for the record books, with the McMurtry Spéirling taking top honours and beating the previous record held by the VW I.D. R. A hugely eclectic mix of cars rounded out the Top 10.

Silverstone is quite often regarded as the home of British motorsport for its Formula 1 connection, however, the Festival of Speed is a worthy candidate for the title. While F1 is seen as the pinnacle of modern motorsport, the accessibility and viewing opportunities are somewhat lacking, never mind the cost of attendance. Goodwood brings you right into the thick of the action, where you can even brush shoulders with famous drivers both past and present. The variety of cars in attendance unrivalled by any other motoring event in the world.

Having spent all four days at Goodwood and walking over 40 miles, I still don’t feel like I saw everything. The first day is always a bit overwhelming as you try to get your bearings. What should be a five-minute walk to the next point of interest, could easily end up taking an hour because of all the distractions along the way. You could take the relaxed approach and just take in whatever you are confronted with, or meticulously plan your day to ensure you get to see specifics. Either way, you’re in for a good time.

If you only make it to one event a year and want to see a bit of everything, the Goodwood Festival of Speed is for you.

WOW. Out of words. Thank you so much for this. For people like who only dream of one day being able to travel to Europe a experience so many cool events/museums/track days, an article like this with so many pictures is amazing. Thank you.

Wow! I thought I knew about cars but after checking out this story, It's back to primary school! Unreal is the only wird I can come up with! Photos are RIDICILOUS!!!@ INCREDIBLE camera work! Who drove the Mercedes Silver arrow? Mind-blowing event.

If you are referring to the auto union, I believe it's Tom Kristensen

I don't know what that old-timey silver race car with the dually rear axle is, but it looks sweet.

That'd be the mid-engined V16 silver arrow from Auto Union. They'd run double pairs of wheels on the rear axles on some of the tracks they raced at, the Nordschleife being one of them. IIRC it was because the skinny rear tires normally used as a conventional pair could not survive a whole race on some venues, specially when 1930s cars started developing stratospheric levels of power.

Bugatti did the same with their Type 59 race cars. I am confident that other big-shot pre-war race car manufacturers did it as well. 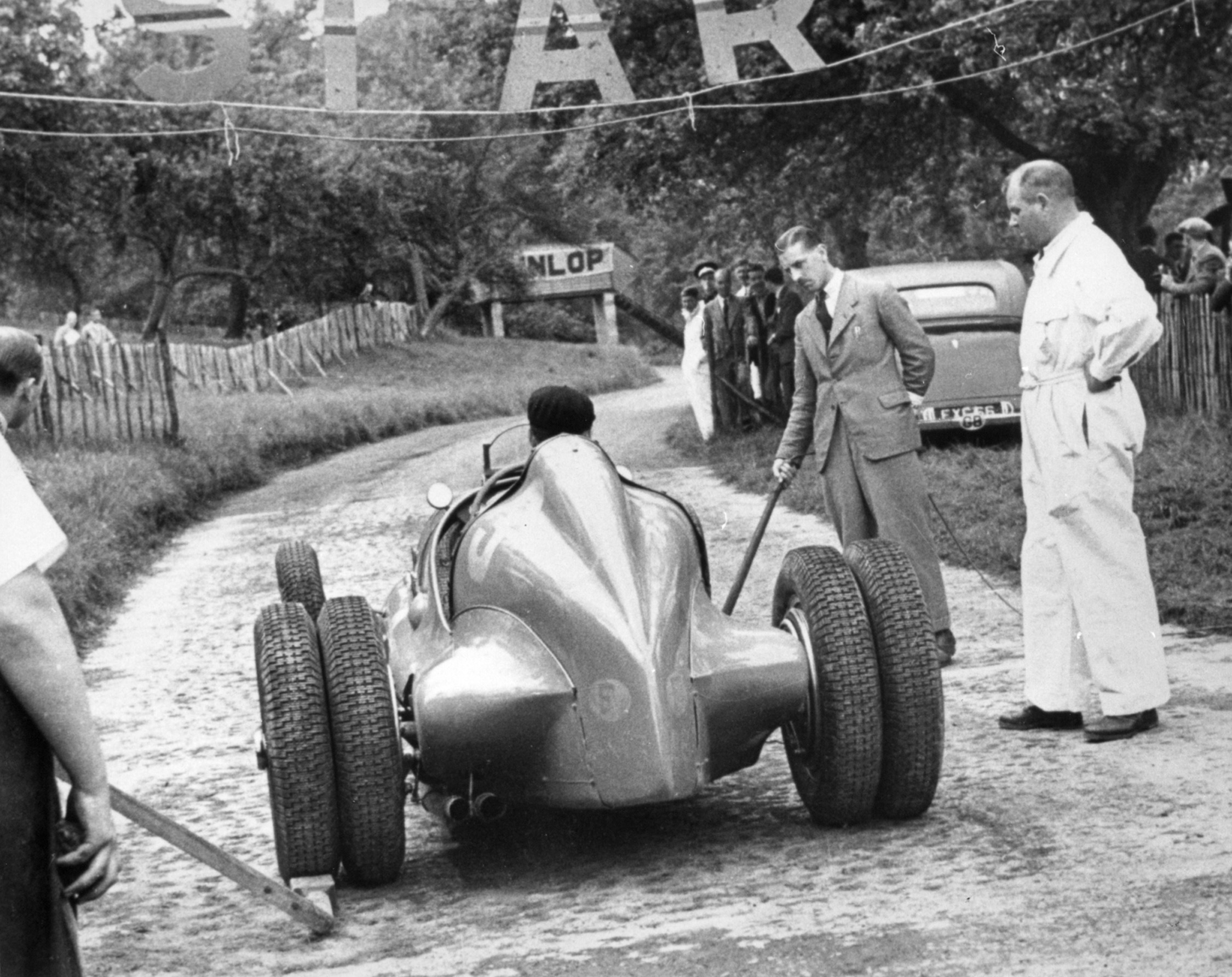 Thank you! Do you have any super closeups of Travis pastranas gymkhana car!?

I've saved all of those for a dedicated spotlight - the car is definitely worthy of one!

Amazing little article mate. So many great photographs. This event is indeed on my bucket list!

Very nice article and pics. The Lanzante P1 GTR is out of this world. Singer Turbo Study looks cool AF too.

Note that silver M3 Touring was driven by Duke Richman himself. Which is even cooler than a Nurburgring record breaker wagon.

Beautiful pictures of a beautiful event. Does anyone know what the orange beauty was in picture 30?

Well, i was stumped too, so put the Reg number in the checker and came back with a 1964 Elva fissore 160 GT.
The front is just as pretty too! https://www.carrozzieri-italiani.com/listing/elva-gt160/

Thanks! I wouldn't of thought to check the registration.
You're right, the front and side profile are gorgeous. Gives me some Ferrari Dino/ Lamborghini Miura vibes.

Stunning little car, they only made a few prototypes, bet they were fun at under 600kg and 185bhp.

Great article! As someone with a confirmed case of megalophobia, those Festival of Speed sculptures really freak me out. I just cannot conceive of how they are constructed and standing near one would trigger a real panic attack. Just crazy...

you must feel crippled around hummers

The team from https://mycarheaven.com had a blast at Goodwood this year!!

Hon. Mention: Every pic with a viper in it.
Seen a running black viper coupe on the road for the first time ever today. Crazy crazy car. The look, the sound, the thunder on downshifts... JEEZ.

Must visit, one day!