I’d like to take a break from the usual Speedhunters proceedings to introduce a subject very close to my heart.

This is not a piece about fast cars, or a race event. Far from it. See, I am an enormous fan of German car tuning of the ’80s, ’90s and ’00s, as well as the culture that surrounds it, and I’d like to introduce you all to it too.

Players Classic 2022 was the first time my friend Ray and I had our cars in the same vicinity together, his being a W126 Mercedes-Benz 500 SEC and mine the E38 BMW 740i. In all honesty, both of the cars attracted a lot of attention at the show.

It got me thinking: just what is it about this style of car that appeals so much?

Ray’s 500 SEC is one of the most elegantly intimidating cars I’ve ever seen on the road. I’ll try to refrain from using words such as ‘gangster’, but let’s be real here – this car is gangster as f**k.

You can see the ’80s roots immediately. The angular nose, box arches and strakes in the side cladding of the AMG ‘Hammer’ body kit give the era of car design away. It has been modernised in this case with Air Lift Performance suspension and period correct O.Z. Racing AMG Aero 3 wheels, albeit stepped up and widened to ‘modern’ fitment standards.

Big-body Mercedes models of this era have always had a cool reputation about them, especially a wide-body SEC. They were known to be stupendously powerful in AMG form, yet with an understated aggression compared to the equivalent Ferrari or Porsche in their price bracket.

That could be why they have a stigma for being popular with Wall Street traders, Harlem drug dealers and Brooklyn rappers alike. Of course, many of the stereotypes are jokes, but often there’s a little truth in there somewhere.

Whilst old school Mercedes’ have had a steady reputation over the years, BMWs from the same era have seen a recent explosion in popularity amongst enthusiasts and non-enthusiasts alike.

I avoided any such rush when I bought my Japanese-imported 740i in 2018. At the time the market was still flooded with poorly maintained examples that had been bought cheap and sold cheaper in a cycle of ‘image preservation.’

My E38 is a low-miler, one (previous) owner car and it was the perfect base for me to exact my inner ‘Parthunter’ onto. You can imagine that the aftermarket for a 7 Series is a lot smaller than it is for a 3 or 5 Series, and this makes it much harder to find parts.

Over the years though, I have managed to track down and acquire a load of AC Schnitzer components for the 7; ACS being my tuner of choice from the ’90s BMW crop. The holy grail are my 19-inch AC Schnitzer Type 2 Racing wheels. I’ve rebuilt them with stainless steel lips to 19×10-inch and 19×11-inch, and wrapped them in Michelin Pilot Sport 4 rubber. As with the rest, they are silly-rare these days.

In fact, ACS parts for the E38 are so scarce, I may have picked up spares for each along the way. A fifth wheel, a few lip spoilers, a couple of sets of side mirrors… and one extra passenger side mirror too. Not that I’m addicted or anything. No, it’s all… just in case.

The surge in popularity of classic BMWs is a double-edged sword for enthusiasts. On one hand, prices have really shot up over the past few years, meaning a lot of tidy examples will now offer a solid return on investment. This is always good to know, even if you have no intentions of selling.

On the other hand, celebrity owners such as music artists Frank Ocean and Tyler the Creator (both of whom own modified E30 M3s) have increased the desirability of retro Bavarian metal to the masses. They are true enthusiasts though, alongside the likes of rapper Action Bronson and fashion designer Ronnie Fieg. However, their appearance ‘among the stars’ of today’s world have turned these cars into fashion items as much as enthusiast cars.

This means that not only are the prices increasing, but an awful lot of old BMWs are being bought by people with no interest in maintaining classic cars. The sad thing is, I can just imagine how many will end up scrapped or broken as the owners realise they’re not prepared to really cherish their latest ‘fashion accessory.’ Hence why public appearances such Kim Kardashian’s 40th birthday celebration, based around her white E36, might actually be damaging the market for many people.

Whichever way, classics from BMW and Mercedes-Benz are truly special things. They’re cultural icons, truly aspirational vehicles from a time when you had to save to afford one, and couldn’t just struggle to afford monthly finance payments to maintain some sort of image.

I adore my 740i, and given Ray’s collection of classic Mercedes,’ I know just how much of an enthusiast he is too. We’re not alone when it comes to these cars, and I’d love to share more stories about these types of cars and the culture (both tuning and human) that surrounds them.

Businessman In A Tracksuit: A Custom Wide-Body 7 Series 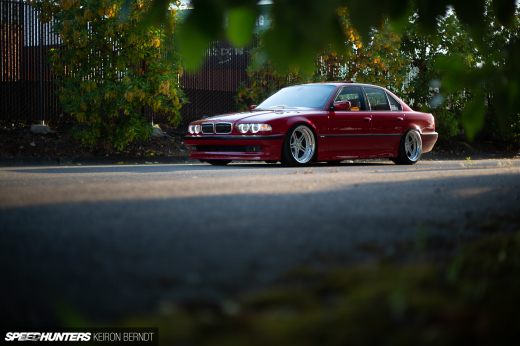 The M7 That BMW Never Built

I just sold my Benz on Collecting Cars.

I wish we had this car culture back in India!

Worst thing I did was sell my 560SEC. Luckily I still have a '89 560SEL with a gen 2 AMG kit, but the coupes have that something extra. Bruno Sacco sure knew a thing or three about car design.

I've wanted a 7 series since watching 'The Transporter'. Always been attracted to big body cars. One day I will win the lottery and spend it all on one car lol

The widebody Mercedes 500 SEC has a cult following because has style, widebody, looks sexy lowered,
Just look at the Merc ....it exudes coolness

Bring up the Indian Streets and bumps! RIP bumpers.