How do you like your AE86s? Are you a purist who prefers to focus on function and keep things simple? Or do you value presentation as much as performance, and like to mix both for best results?

If it’s the latter, then you’ll likely have plenty of time for the Hachirokus built by Ikeda-san at Inazuma Worx.

Last year at Wekfest Japan, Ikeda-san impressed us with his race-ready 1UZ-swapped AE86. For 2022 he’s impressed again, but this time around with a further evolution of his own Trueno.

It’s been a few years since I’ve seen this car, and it’s only gotten better with time. The super-clean 4A-GE 20V swap is the stuff of AE86 dreams, and the detailed motor sits beautifully in the shaved and wire-tucked engine bay.

I noticed that Ikeda-san has done away with a polished look for the cam covers and gone back to a glossy black finish. He’s now also running longer velocity stacks, a new octopus-style header and an upgraded ignition system.

Ikeda-san really has an eye for it. He take the details that made the AE86 so unique and special, and then boosts them up a few notches.

Take the custom wheels for example. These have been built around AE86 OEM wheel centers which were modified and bolted onto a wider rim. They’re aggressive, but still retain a factory-like look.

Like the exterior, the interior remains mostly stock. In here, modifications are limited to a Nardi steering wheel, Recaro seat, and a Haltech iC-7 LCD data-logger/digital dash mounted in a custom panel. This connects directly to the Haltech Elite engine management system controlling the engine.

Could this be the most perfect restomodded 86 ever?

An N/A R30 Dropped To The Ground

If so, then much like myself, you won’t be able to keep your eyes off this R30. It’s not that it’s just an old Nissan Skyline with an aggressive stance, but the complete package.

One look in the engine bay and you’ll understand what I mean. There wasn’t much info on this car and I desperately tried to find someone to talk to about it, but alas we can only draw conclusions from what can be seen. The FJ20ET motor, with its electronic quad throttle bodies, open velocity stacks, coil-on-plug ignition and a set of very nice headers appears to be a well-refined setup.

Looks-wise, the body has been left original, save for the addition of a chin spoiler and some gentle reworking of the rear fenders to accommodate what we might as well call ‘polite onikyan’.

The interior has mismatched race seats, a bolt-in cage and a Stack dash.

The second Toyota of this post is a KE74 Corolla wagon owned by one of the Lowbrain crew.

Aside from the fact that these wagons make for my favorite type of drift cars, this one has pushed things a few steps further. One look through its rear hatch and all is revealed.

Basically, the owner was getting annoyed at the amount of bump-steer that the car was getting when drifting at tracks like Nikko. Handy with CAD, he went and redesigned the entire rear suspension layout basing it around an S13 subframe. Due to the lack of space, he positioned the dampers in the trunk where they’re actuated through a long pushrod connected to the lower arms.

It’s totally nuts, but in the best possible way.

This is one build I’m sure you will all appreciate. But it’s not my last from Wekfest Japan 2022, so stay tuned for more. 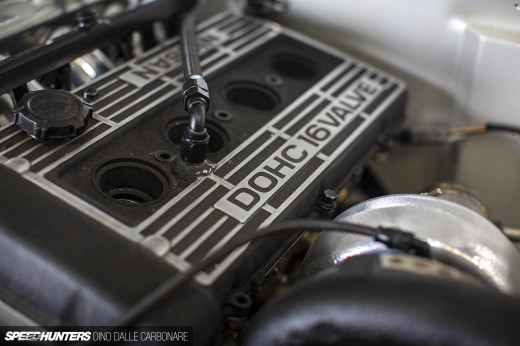 So, What Was In That Corolla Van? 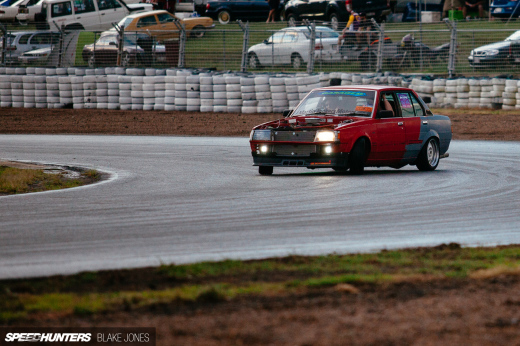 Could someone more educated on the subject than me explain where / how the top radiator hose is routed on that insanely clean white AE86?

The 20V 4AG's were originally in FWD cars. When rotated 90 degrees to fit in a RWD car, the top radiator hose enters the head behind the header near the firewall.

Normally, you see a pipe running above the header to connect the upper hose. It looks like he is running it below the header. In the 4th pic, the one looking down at the engine bay, you can see a hose on the right running low. I think that's the hose.

Oh hey, I remember that KE wagon from Toby's feature on the Lowbrain team last time! It had a damper from a bike previously to reduce bumper steer I think? Great to see it's still constantly evolving!

a pushrod system on a 40 years old econo-wagon; even a big chunk of petrol-heads won't understand the dedication of this owner.
For myself i understand the idea of a "shell" that you're used to it (dimensions, seating position, gear lever position,...) and everything else is now high tech; i still enjoy pushing my dad's rusty low powered car and know its absolute limit to the millimeter more than my sporty relatively insane powered coupe. Even my friends enjoy the ride and feel the thrill on a very lower speeds in that crapy 3 boxed style car.

That has to be the cleanest engine bay I've ever seen

Would like to see the underside of the Corolla to see how the cage is connected to the sub-frame as it looks impressive.

These are on x games mode

PS: Oh the days Nissan made actual cars instead of lyfestile mobility appliances. Opinion unpopular today, but all will eventually wake up to the failure of the 400Z and that the GTR never proceeded to a midengine under a new name. RIP 240Z/S15/180/300zx/v8Titan/GTR, may new nissan go the way of Pontiac before the next Armada/juke/maxima/altima/370z AT/etc/etc, so the heroes can be remembered clean and shiny.

Another 3 fantastic cars, and that engine bay is perfection

That R31 is just stunning!

I love that Corolla!

Too bad you couldn't drive them... Ffs, when is this excessive-negative-camber bs going to stop?

The wire tuck on that white Trueno blows my mind. Makes you wonder, does that engine even run? I see zero hookups to anything! Amazing.

these are the EXACT same cars reviewed by video option or best motorings wekfest coverage. the video is on youtube. whos the hack?