SHARE From IMSA To Japan: A Cunningham Racing V8 300ZX

Many moons ago, while wrenching in high school auto shop, I overheard someone say: “Hey guys, check out my new car.”

I was under the dash of a Fiero/Countach at the time (seriously), and after less than gracefully repositioning myself upright, I was shocked to see a fellow student standing in front of bright red, twin-turbo 1992 Nissan 300ZX.

I near fainted, partially due to the blood rushing to my head and partially due to what I saw in front of me. It took all I had washing dishes part-time to keep my then 17-year-old BMW E30 in good nick, and here this guy was driving around in a current model Japanese sports car.

Originally the owner wanted us to cut the springs, as we did to his last car, but thankfully we talked him out of it. However, it did need a clutch, and via the guidance of our seasoned and incredibly patient shop teacher, we managed to complete that job over the course of a few days. After that week, I never saw the car again. Rumour had it the poor Z32 lost a shoving match with a rather sturdy tree. Given the owner’s ‘mind your own business’ tone when asked about it later, I suspect that story was more truth than fiction.

I only bring this up today because I can’t help but think of that car every time I see a 300ZX. Even if the 300ZX in question happens to be a genuine race car that was part of the same successful Exxon team Steve Millen belonged to.

Steve is of course brother to Pike’s Peak legend Rod and uncle to drift legend Rhys, and like his Millen family members was an absolute weapon on track, especially when behind the wheel of a race car like this one.

Steve drove 300ZX-skinned cars alongside teammate John Morton as part of Clayton Cunningham Racing. From 1989 to 1995, seven chassis campaigned IMSA under the numbers #75 and #76, each powered by a 3.0-liter twin-turbo V6.

These engines, which featured an aluminum block, Garrett turbochargers, carbon fibre intakes and a rather large intercooler, were descendants of the motors used in Nissan’s GTP cars of the time. Restricted, they put down 650 to 750hp depending on the configuration of the day. What they were capable of sending to the tires unrestricted is at this point unknown, but it’s rumoured to be a number four figures deep.

On the track, the 300ZXs did exactly what they were designed to do: win. Steve and John won at Le Mans, Daytona and Sebring.

While considerably wider than the production Z32, the carbon fibre bodies these cars ran with definitely carried forward much of the “good design” that Sara lovingly acknowledged in her recent 300ZX story.

Noteworthy accomplishments for the 300ZX IMSA program at that time included wins at Watkins Glen and Road Atlanta, as well as several pole positions and two fastest laps.

Under the red, white and blue skin exists a remarkable chassis designed by former Nissan chief designer Trevor Harris. Prior to working with the Z32 chassis, Harris spent considerable time making Datsun 510s incredibly competitive. He did this when America still didn’t really acknowledge the potential of silly little cars from Japan.

Because the GTO (and then GTS) class didn’t require factory underpinnings, a tube chassis was designed from the ground up. The wheelbase of this car is 96-inches long, which is slightly longer than the short-wheelbase version of the production Z32.

When designing a chassis, Trevor specifically intends for them to have minimal body roll, so this car features rather large sway bars and as low a spring rate as he could reasonably get away with. The rear sway bar stiffness can be adjusted by the driver from within the cabin; everything else needs to be tweaked by the pit crew.

The ‘300ZX-GTS’ in these photos, chassis #009, is a little different than some of the earlier cars. For a start, it’s not twin-turbo V6-powered. Instead, a Nissan VH-series V8 can be found ahead of the quick-change rear end.

Whether it was a spare car or a development car is where things get a little bit murky, but it’s one of only two cars built by Cunningham Racing originally configured for use with the V8 engine, not retrofitted afterwards as other cars were. This would have allowed it to race in the 1995 IMSA GTS-1 class (the VG engine was outlawed at the end of the ’94 season), but the car was reportedly sold to Japan before it competed in any US events.

Records of the time are not the most precise for the vehicles later down the line, and because this car was crashed in Japan and later repaired, it could contain parts from a variety of different chassis. Regardless of its specific provenance though, it’s a 300ZX worthy of discussion. Not simply because it still exists, but because it’s still being run.

Since taking ownership in 2014, Jun Hosoi from PEAK’S, a company that produces carbon fiber components for mostly motorsport applications, has been both driving the car and trying to accurately compile its lost history.

In 1997, it had been entered in a couple of JGTC GT500 class races wearing Fedex logos, but did not enjoy any success. Today, in its restored condition, it features the iconic Cunningham Racing 12 Hours of Sebring-winning livery.

When he’s out on track, Hosoi-san is not going at the same speeds the 300ZX-GTSs ran in their heyday, but the car is still being driven often and as hard as possible for a precious 25-plus-year-old race chassis.

The Nissan often appears alongside Hosoi-san’s NASCAR Toyota Camry and Mosler MT900R, and the ‘Nerds’, a group of like-minded driving enthusiasts, share driving duties every now and then.

When Mark caught up with the Nissan, it was at PowerCraft Japan surrounded by several ridiculous cars including a genuine Shelby Cobra and an ex-Le Mans Mazda 254i. Like the 300ZX, these cars are also prepared to be driven.

Unfortunately, while Mark was able to shoot the car sitting still, he wasn’t able to capture it trackside. At least not yet… Still, we’re Speedhunters, and passing up the opportunity to photograph and write about this car – even stationary – is something we couldn’t do.

Wish someone made the 300zx IMSA body kits cause thats a smoking look.

Great article! I hope the owner ends up learning more about its history! Also a little off topic, but I was really curious about this little thing, anyone know what it is? 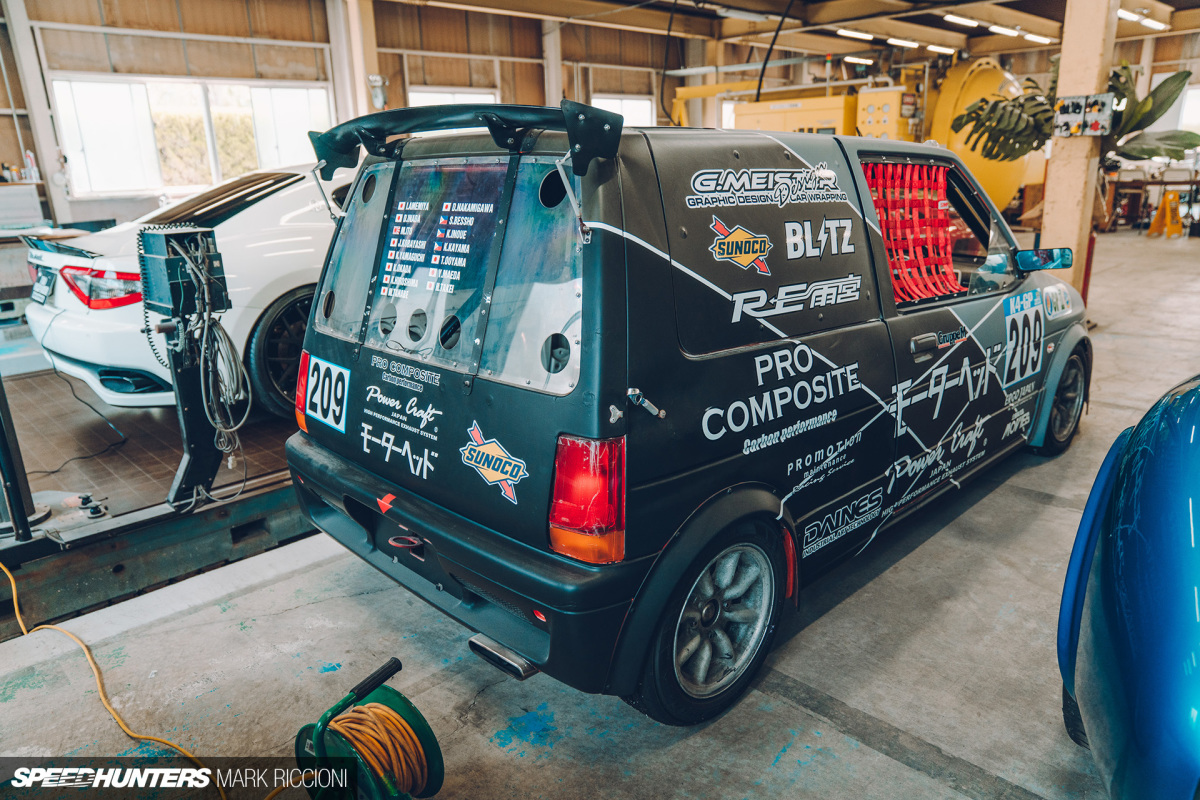 I think it's a Suzuki Alto Works.

I see, thanks! I wonder if it's got some kind of rotary in it because of the RE Amemiya decal.

The Cobra appears to be a kit car. The CSX # should be mentioned.

No CSX callout makes me assume it's a kit. Were it real, the CSX number would surely have been mentioned.

You two could both very well be correct. I shall see if I can get verification!

Article should have included...
http://www.speedhunters.com/2019/08/long-lost-le-mans-mazda-rotary-relic-reappears/

Wishing I were one of the 'Nerds"

I don't have any from Mark but there owner's instagram has a few. 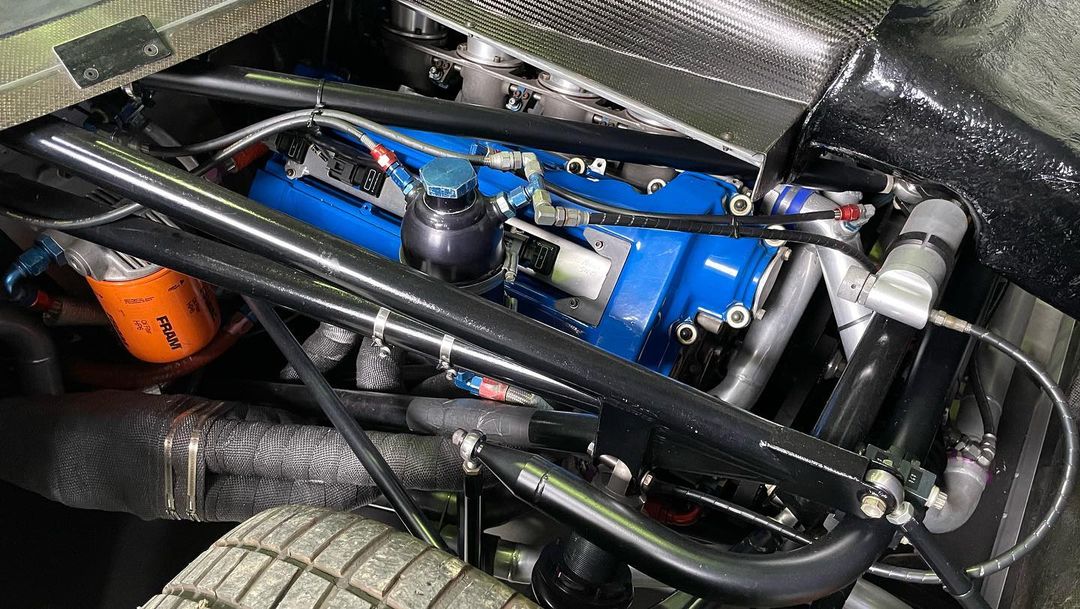 Any chance we could see the engine? 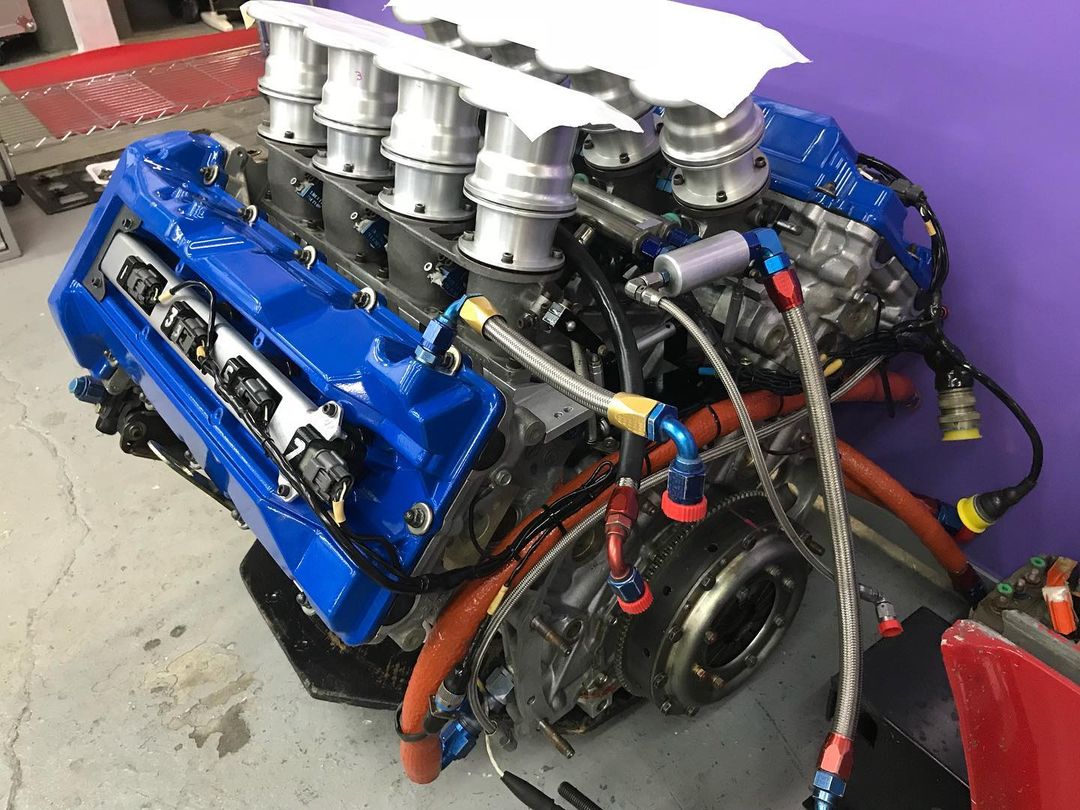 I developed a 240Z with John. We raced at WSIR and a few other tracks together. Absolute legend. Can't even begin to tell you the stories. Among men there are legends. Among legends there are myths. John is a myth to me.

I should call him tomorrow. Thanks for the feature. This is badass and let's me know real legends never die.

Thanks. "This" is new to me but I am all for it. The history of race car chassis is a serious rabbit hole to go down and very interesting.

It is, but in terms of road racing it really comes down to one simple ethos that has evolved over time: you want the chassis to be stiff so it doesn't deflect and change the contact patch of the tire.

As long as you remember that it's not that daunting. Space frames and the carbon tub chassis are all efforts to make things stiffer so they flex less. This ultimately results in more control over the tire.

As long as you remember that you'll be alright. The rest is just engineering history. Cool article though I liked this a lot!