Quite often in life, the best things can be lurking right under your nose. Day after day, you could be driving past fairly unassuming buildings not knowing that something special goes on behind closed doors. Part of this is by design. No reliance on footfall from passersby, but instead reputation and experience is what brings the work in.

Autosportif Engineering, nestled in a quiet industrial estate in Bicester is one of these companies. It’s largely a two-man operation comprising of owner Howard Dent and Jon Hall, with contractors Mike Fletcher and Nick Beckett supporting. With a combined six decades of motorsport experience between Howard and Jon, their primary focus is the maintenance and support of Subaru WRC and Group A competition cars.

Before even going through the doors, the building itself has an interesting history. Autosportif is situated in what used to be one of the March F1 (and later Leyton House) buildings, with the three buildings immediately next door and opposite serving other purposes during the time. A quick search online for March F1 HQ will show that the big green sliding door alongside remains from that period.

I learned that back during the March F1 days, the machine shop staff would often throw any faulty parts over the fence next to the railway line, and displayed in Autosportif’s entrance hall today are a few of the items found so far; namely intake trumpets and a suspension upright.

Coming from the entrance, the engine room is the first area you’re presented with and divides the office from the main workshop. Along with various Subaru Group A engines being built, there was Lamborghini Miura long block, S2000 VW Polo motor and an Escort Cosworth YB nearing completion too. While Subaru competition cars are the key focus at Autosportif, Howard’s previous vocations mean he is highly skilled in all manner of engine work.

The next door opens out into the main workshop, which for any Subaru or rally enthusiast is simply mind-blowing.

Not a single empty shelf exists in any of the workspaces, and there’s a good reason for this. Given that the majority of components made in-period for the various cars are no longer available, any and all opportunities to buy parts when they come up for sale are taken. It may appear unorganised, but Jon assures me that every part is grouped by relevance, be it specific to a car and awaiting refitting, or being stored for the future.

On the day of my visit, an S6 WRC car originally driven by Juha Kankkunen during the 2000 season took pride of place on the workshop floor. It was in at Autosportif to be checked over ahead of upcoming events.

I won’t delve into the details of this car now though – we’ll save that for the upcoming spotlight.

Alongside the S6 sat an S5 WRC car, this one mid-build. Its livery strays from the iconic blue and yellow scheme, and was chosen to match one of the other Subaru rally cars the owner currently has in his possession.

Under the mezzanine, a Group A GC8 being built for Antonio Sainz, (older brother of Carlos Sainz) was awaiting parts, with its recently fitted Reiger dampers and uprights on show. That gear is eye-wateringly expensive, but nothing else will suffice at this level.

The last car sat covered to respect the owner’s privacy while it’s being built.

Everywhere you look, the walls read much like the lines in an oak tree, be it champagne bottles from event wins, race numbers or photos collected that date the numerous events and successes that Autosportif have supported or campaigned themselves. The Australian flag proudly hanging off Jon’s toolbox was carried over the finish line of the 2006 Nürburgring 24hr race, where Autosportif entered what was effectively a derestricted Group N car.

Further investigation around the ground floor led me into the machine room where mills and lathes from March F1 now sit. The heavy machinery show wear and patina that can only be acquired from years of use.

Across the opposite side of the workshop is a large fabrication and welding room, where parts can be made or modified well away from the cars.

A quick trip outside to the yard revealed two Legacy road cars awaiting their turn to be built into rally machines, along with further rooms, the first containing the engine dynamometer. The dyno, originally from Andy Rouse Engineering, famous for Ford BTCC efforts in the ’90s, had a BMW S14 turbo engine bolted up awaiting mapping.

In the storage room next door was a Legacy Group A shell, originally driven by Colin McRae, which is now owned by Autosportif and worked on only when time allows. As the story goes, the car took a big hit during the Malaysian round of the 1993 Asia-Pacific Rally Championship, with the force of the impact so great that it relocated the gearbox and limited movement of the shifter. This is still evident on the damaged floorpan which has since been cut out and was sat outside. By today’s standards, the roll cage is extremely minimalist and shows just how far safety has come.

Heading back into the main workshop and upstairs, the storage areas revealed shelf upon shelf overflowing with parts. Closed deck blocks and spare heads, brakes, gear sets and interior components are spread out, but at the same time organised for each respective build either current or upcoming.

I can safely say, I have never seen as many carbon or Kevlar-backed Prodrive seats in my life, a pair of which would look right at home in my Spec C STI.

The GC8 shell upstairs, originally a Group A car driven by McRae, Burns, Liatti, Fisichella and Navarra at various points in its life, is another in-house project patiently awaiting its turn.

Upon further exploration I came across a 1:12 scale model of the 206 WRC car, originally gifted to Richard Burns during his season for Peugeot. The final room had dozens of old motorsport magazines and even more Prodrive seats!

Two final items I was shown before calling it a day were particularly interesting, the first being the air actuated gear shift (top) which was trialled during the 1992 season in the Legacy driven by McRae. The valve block (bottom) was eventually repurposed as an ABS control block in the Impreza later on. This was a huge leap in technology for the time, but sadly proved unreliable and as the drivers preferred shifting themselves and it was ultimately removed. Howard has in his possession copies of technical notes, drawings and memos which related to the gearbox, a nice bit of history for sure.

Another component that didn’t fall into favour with McRae was a steering column which, while appearing fairly normal, had an epicyclic gear kit in its anodised red housing. Every full revolution at the steering wheel would result in two rotations of the output shaft. This will likely be fitted to the Legacy shell in storage when the build begins.

There really is something special about a proper automotive workshop, be it for road or motorsport. Experience trumps TikTok views, knowledge and years of hands-on experience that simply cannot be compressed into a YouTube video. Remember that the WRC cars in period cost close to £600,000 to build and decades on, these cars are still kept running thanks to the collective knowledge in places like Autosportif.

Look out for that aforementioned spotlight on the S6 WRC car very soon.

The Red Bulls Bring It Home

Awesome story! So much history stored in this place. Will need to go and take a peek in the classifieds to see how much GC8’s cost nowadays!

I hope you're sitting down when you look. They aren't cheap now for a good car!

Living in America I’ve never seen a WRC car in person, so I can’t imagine seeing multiple, owning multiple, having the parts to maintain one, or the ability to campaign and race one.

Personally I love this article, because I love these machines since I was a little kid. Dreaming to have one myself since the age of 4, watching colin Mcrae on the TV. Don’t have the money for the real deal, but build something myself to the best I can. 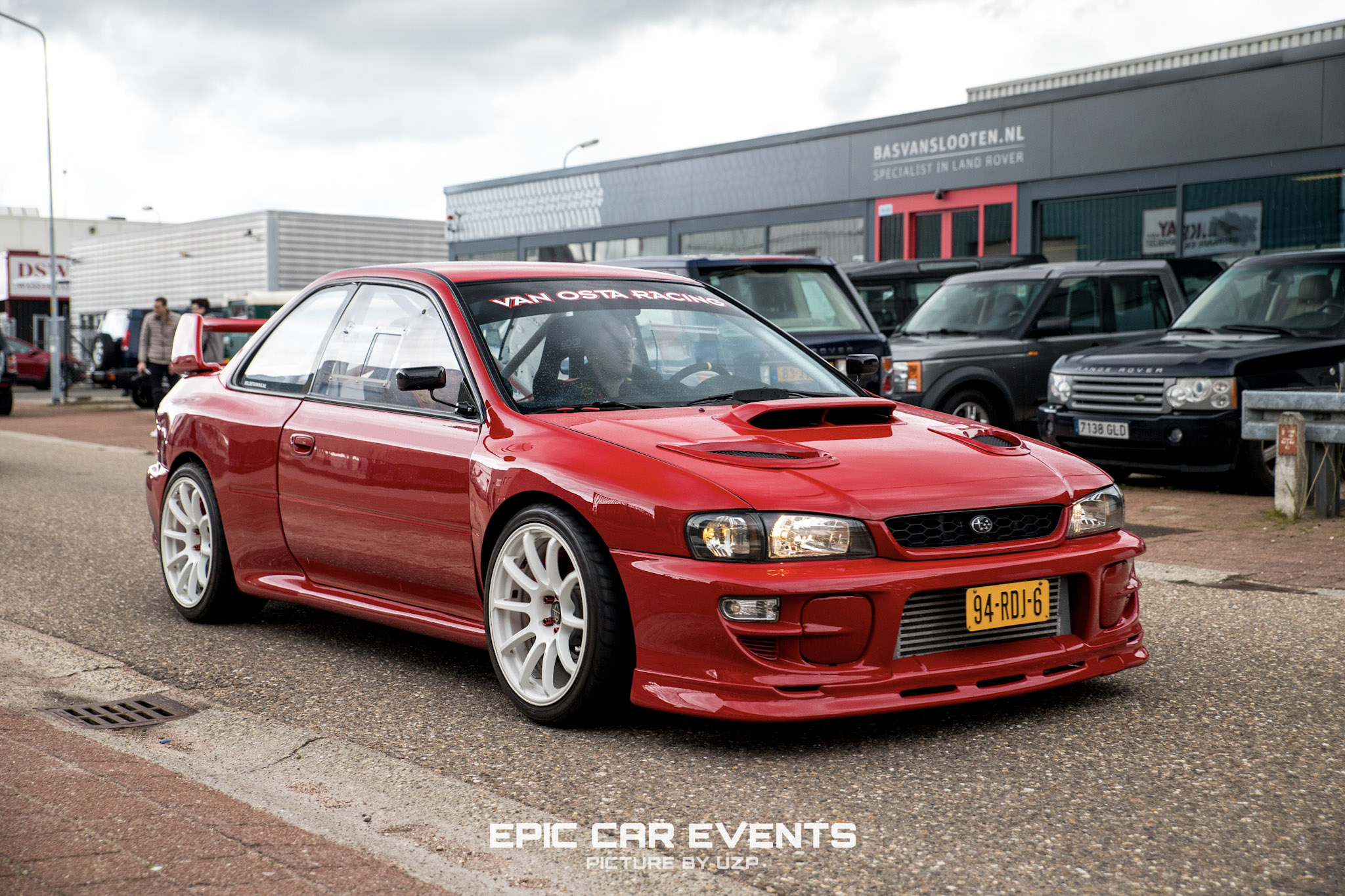 Nice to see that Holowczyc/Wislawski car in good hands!

The car that was in the workshop shared the livery with the original Group A (also owned by him) and S5 (Owned by someone else) cars but is a different shell. https://www.ewrc-results.com/carinfo/121-subaru-impreza-555/?spz=7933

Interesting. I can understand why McRae would not want it. It'd make for some rather unnatural driving feel, since the output would be exaggerated relative to the steering wheel input.

Great story! I can read days about such inventions like steering rack or gearshift.
Can you tell more about the S5 build - is this rebuild of original Holowczyc car or this is a copy?

It's a genuine S5 shell, just with the Holowczyc livery to match as the owner also has the genuine Group A car in his collection https://www.ewrc-results.com/carinfo/121-subaru-impreza-555/?spz=7933

I remember Markku Alén showing the pneumatic shifter on television in 1993 rally Finland when Impreza made it's world rally debut.
Alén crashed out on first stage due to shifting mistake. Ari Vatanen took 2nd place in his Impreza in the end. Vatanen told in an interview that he didn't use the paddle shift on stage because it wasn't in his muscle memory and it takes a very long time to adapt from stick to buttons.

Howard and Jon are the best at what they do. Great group of guys there.