SHARE Tokyo Auto Salon Through The Eyes Of A First-Timer

I’ve never met my fellow Speedhunter Matthew Everingham, but after reading his bittersweet accounts of the 2018 Tokyo Auto Salon, I’m pretty sure we could quite easily be mates.

I too share Matt’s sentiments about mega car shows – they do my head in as well. I like my car shows like I like my social groups – small, intimate and preferably quiet enough to be able to hear what each member has to say. But unlike Matt, I didn’t have to fly to the opposite hemisphere to attend the Tokyo Auto Salon – the 2022 show being my very first time at the event.

I simply jumped in Project GC8 and drove an hour and a half through Tokyo’s vast network of motorways, or kousokudoro, making a brief stop for a coffee, a restroom break, and a snoop around a nice Soarer on BBS wheels.

On Saturday morning, I arrived at the Makuhari Messe in Chiba a little late after some confusion with my access pass. That meant that by 10:00am the car park was already reaching capacity, so I took my chance to shoot what show-goers had brought out to the event. You can catch those two stories here and here. Mid-morning also meant that the halls of the event center were well and truly packed out with people.

The Small Yet Mighty

With crowds swelling around the big names like HKS and Liberty Walk, I made a beeline for the quieter areas of the show to nose around the kei cars, trucks and vans.

After all, this is Japan and kei vehicles are big here (not literally).

You’ll find something for everyone, the tradesman with pizzazz, the camper who prefers glamping, and the space-conscious articulated lorry driver. I’ll give you all a closer look at my kei favorites in an upcoming spotlight post.

I’m not sure if I’ve become slightly desensitised to the weird and wacky living in Japan, but I must say I wasn’t particularly blown away by the crazy (or lack of) cars on show. I’m not sure what I was expecting, but I felt like the weird stuff was outnumbered by interesting stuff, five to one.

I don’t know if it was a result of the pandemic or a shift in people’s tastes, but compared to previous TAS coverage I’ve seen on Speedhunters, I personally didn’t get the ‘wow’ factor I thought I would.

Don’t get me wrong, many of the builds on show where absolutely outstanding, and there was an abundance of joy to be found at every aisle corner. But where was the ‘Big Foot’ Land Cruiser I found at a body shop in the middle of nowhere in Ibaraki Prefecture one day last year? That thing was mind-blowing.

Of course, given the sheer size of this show I did entirely miss a few special builds, like the GR Yaris-powered AE86.

I know it’s not the early-2000s anymore, but I was kind of expecting to see more cars like this scissor-door’d Accord Wagon. You know, the utterly ridiculous sort.

I would have loved to see some of the original Top Secret cars, but I think many of them have been sold and shipped off around the world.

Considering I just bought a set of period-correct RAYS-STI forged alloys for my GC8, I really enjoyed looking around RAYS’ selection of new wheels. I’d love to get mine refurbished to look this good again.

By this time my feet had started turning to mush, so I grabbed myself a bowl of ramen and a cup of coffee and enjoyed a brief sit down. On a positive note, the hearty portion of pork noodles was surprisingly good, and it cost the same as it would outside in the real world. God bless Japan and its love of ramen.

With some newly-acquired energy, I followed the giant BBS blimp which hung from the roof to see what they had on display. It was only a few wheels and some race cars – including the Zent GR Supra from Super GT – but interesting all the same.

There was plenty of new tech on display, and Dino has showed you the bonkers stuff that HKS are developing for the RB26. He also gave you a look at the Toyota GT3 Concept, and I’ll follow that up soon with a spotlight on the Subaru STI E-RA.

Endless have a fantastic showroom up in Nagano Prefecture, which I’ve arranged to shoot next time I’m in the area. But with such a nice selection of cars on display, they kind of saved me the trip.

They say you should always try everything once, and I am glad I got to experience TAS firsthand. Seeing the throngs of otaku scrabbling for clear shots of the promo models was pretty entertaining. It’s a phenomenon that you can’t quite appreciate until seeing it right in front of you.

After a day of walking back and forth across the million square meters of showroom floor, I couldn’t wait to get to my capsule hotel and take a long soak in the onsen baths. I’m a big fan of these facilities; they often cost as much as a normal hotel room, but you get access to communal areas for relaxing, studying and of course cold beer and a tasty (second) ramen.

Feeling (somewhat) refreshed, on Sunday I took the advice that Dino had bestowed on me the day prior and gathered up the content I required for my spotlights. That meant hunting down every kyusha build I could find.

Again, I’ll show you more of the best bits soon.

The Hakosuka and Fairlady Z are definitely kings of kyusha, and there were quite a few scattered throughout the show.

Tucked away in a far corner of hall four, I found Sakamoto-san from Garage Active and his two new cars. I wondered why he wasn’t in a more prominent position, but of course exhibitors have to pay for their TAS booths, and those in the main halls come with a sizeable price tag.

I’ve got a feature planned for Garage Active’s R33 ‘Executive’ drag machine, and have a couple more spotlights coming up too. They’re building some amazing complete cars, similar to what Mine’s are doing.

The (Not Quite Yet) End

So, maybe the crowds where unbearable, maybe the cars weren’t as wild as I had imagined, and maybe I lost a layer of skin from the soles of my feet from the many kilometres of walking. But, after arriving back home and having a good night’s sleep, there was only one thing on my mind when I woke the next morning: I wish I was back at Tokyo Auto Salon.

Toby , my first time at TAS was in 2019 and i have same feeling as you but on the opposite way...meaning i didn´t attend TAS this year but judging by event coverages it looks less awesome than 2019. But to be honest i wouldn´t mind if i could have checked it this year again!!! By the way...nice coverage and awesome article as always.

In the climbing world we call that "type 2 fun". Miserable sufferfest while it's happening, but looking back on it you can't wait to do it again.
Awesome overview! Great photography. Can't wait to learn more about that STI E-RA

I’m not a climber by any means but I think I’ll start using that term!

anyone else laughing at the stupidity of the models all having their faces covered...? i guess no one was ever taking photos of their faces.. might as well put paper bags over their heads!

Great photo with Smokey. Inspiring the next generation of enthusiasts.

Little guy was totally in awe!

For sure my favourite one to see! Wonder if the 2nd axle is just a lazy, or they made it a proper bogey drive?

Love the sound system in the Elgrand in the 3rd to last shot, and the Accord wagon isn't too bad either!

Awesome article Toby, I can't imagine how it is going to a massive event like TAS for the first time. pretty sure id struggle too.

Despite the kei trucks and vans, it's nice to see American influence limited. Instead of the rolling monuments to inefficiency and idiocy...they've clearly presented proper cars. 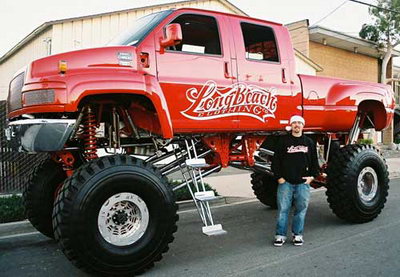 I would agree with you, Toby.
The latest TAS somehow lost its mojo......

Thanks for the coverage and........yum, the ramen looks tasty. Makes me wanna grab a bowl myself.

What is the blue and white car at the BBS booth? I know I've seen it somewhere but I can't remember what it is.

Looking forward to the Garage Active features. They are without a doubt building some of the best Skyline GTR’s currently. Great to see a tuner from the old days stepping it up in a unique way! That 33 is perfection.

It sounds like all the displayed cars & trucks were built by professional shops. Were any built by amateurs- guys (and gals) building cars & trucks in their own home garages? Or is having your own shop cost-prohibitive, due to high real estate costs??

Ahhh. Makes sense. Thanks for the clarification.

This year's show does seem slightly less impressive than those held before the pandemic. Hopefully next year will be better.